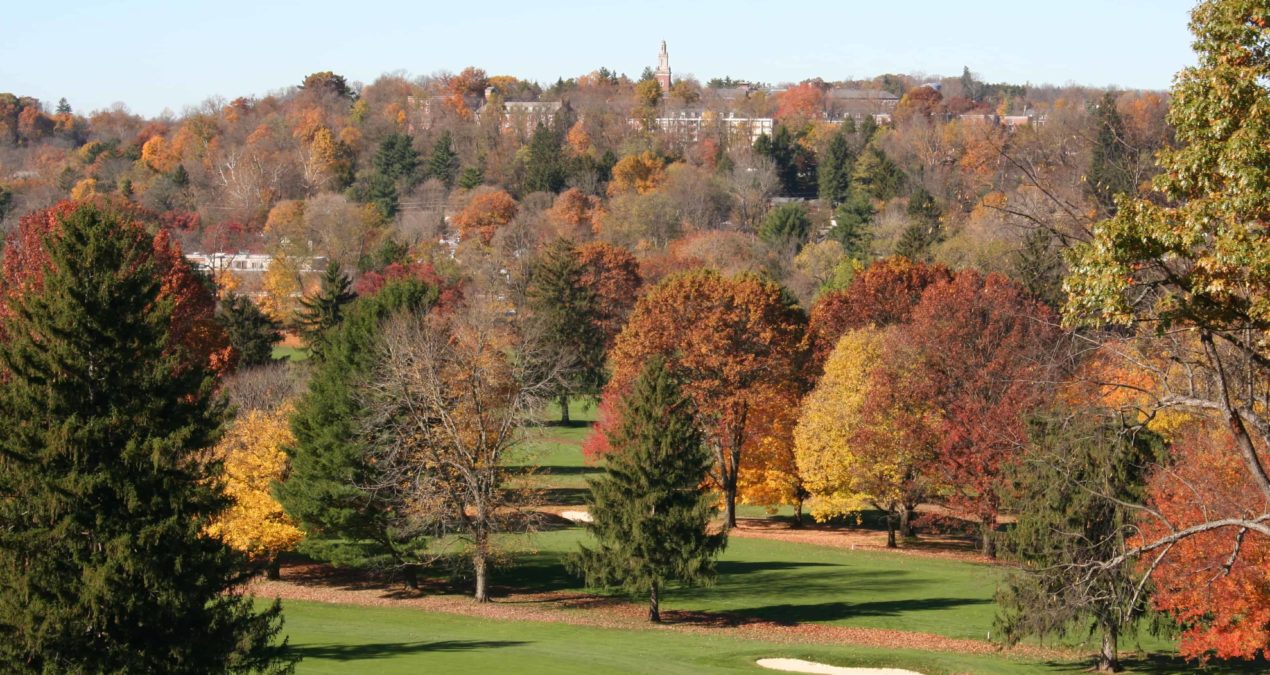 The steeple of Swasey Chapel and the prim lines of the East Quad dormitories make a picturesque backdrop for a few holes at the Granville Golf Course, less than a mile from campus. And soon, the course will be owned by the university that overlooks it.

On Jan. 1, 2015, the Granville Golf Course will be signed over to Denison University, a gift that the Licking County Auditor values at $2,172,600. The course is 18 holes designed by Donald Ross on a property of over 130 acres, which a 2013 easement will prevent from being further developed.

The course was owned by six shareholders, five of whom are Denison alumni from the 1950s, according to Vice President of Finance and Management Seth Patton. Patton said the shareholders decided to give Denison the course when they were “at a point in their lives when they wanted to put their personal estates in order.  All have a love and appreciation for Granville and Denison.”

The shareholders are not the only link between the course and the college. The Denison varsity golf teams have been practicing on the course since the 1950s according to Rodney Butt, the Men’s Varsity coach and general manager of the golf course for 37 years.

In addition to watching the yearly cycle of almost daily team practices and biannual golf tournaments, Butt has seen the shape of the course itself change, including three clubhouse locations and a housing development. “All the long range changes have been for the better,” he said, and thinks the change in ownership will continue this trend. “It’s good that the university owns the course, for the community, alumni and students. With the Granville Inn, it’s a nice place for people to come and stay and play golf.”

Jimmy Slovitt ‘15, an education major from Winnetka, Ill., has been on the golf team all four of his years at Denison, and says that the proximity is a great asset for the course. “Most other schools in our conference have to drive 10 minutes and sometimes even 30 minutes to practice every day,” Slovitt said, “while we have the luxury of having a great course in our backyard.”

The course’s operation should remain the same, though it will be managed by Davey Golf, part of a company based in Kent, Ohio, and Columbus Hospitality Management. But Slovitt hopes to see a minor change: “I would like to see some sort of student rate or student pass to encourage Denison students other than those on the golf team to go down and play Granville. It is a little pricey for someone to go down and play just for fun, so a student rate would encourage golfers of all abilities to get out and play.”

Patton said that the course would not offer full privileges for those connected to Denison, but that the acquisition would be good for the community in general. “We believe having both the Granville Inn and the golf course is a plus, enhancing the opportunities for both to be successful.”