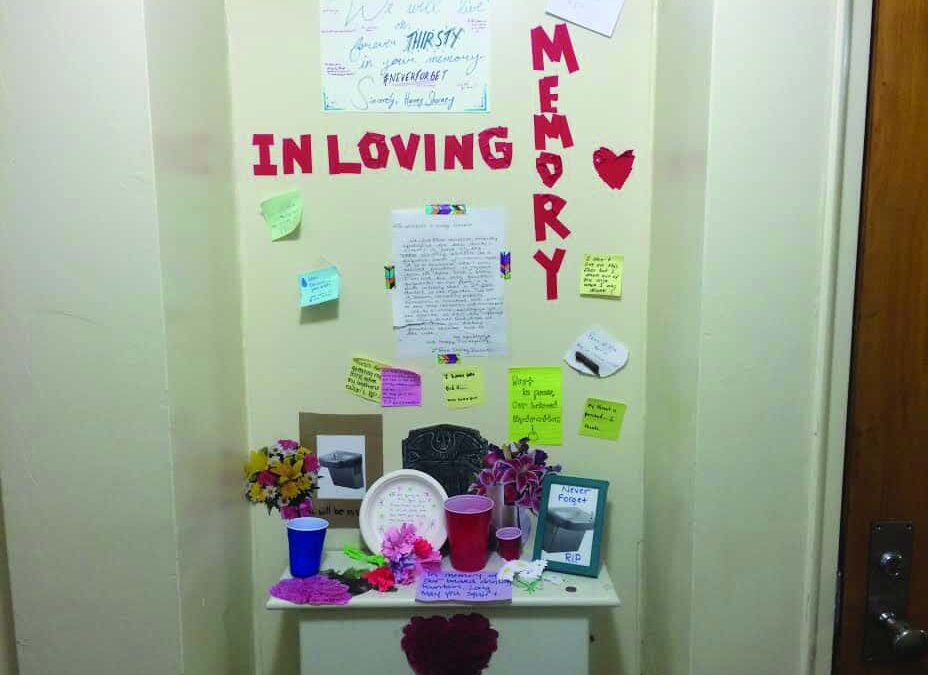 Apparently, freshmen like to break things. In the first semester of the 2014-2015 school year, there was an influx of incidents at Shorney Hall.

This year there have been nine incidents of prank fire alarm pulls on campus, four coming in October alone. Last year the total cost of repair was $83,900 which averages out to $39.28 per student. The use of data through the campus climate page in this article was given to the Denisonian to use through the written consent of Dr. Kennedy, VP of Student Development.

Recently, Shorney second floor Resident Assistant’s Wendell Jackson ‘17, an athletic training major from Chicago Ill. and Abigail Thill ‘16, a women’s studies major and art minor from Minneapolis Minn., sat down to discuss the problem. Jackson stated that, “The second floor has had a second occurrence of a water fountain being ripped out, and the first occurrence was on the fourth floor.”

In addition to the destruction of the water fountains, Jackson went on to state that, “Other incidents of vandalism include numerous cases of defaced bulletin boards.”

Because of the recent upswing in vandalism in Shorney, Thill said that, “I check my bulletin board every Saturday morning and Sunday morning. I walk outside, look up and down the hall seeing if my bulletin board has most of its letters.” Both RAs agree that vandalism is a hard problem to combat. Jackson said that, “You have to see the person; you can’t assume if it’s that person or this person.”

RAs in Shorney are not the only group that has taken notice of the increase in vandalism. Individual DCGA senators are attempting to persuade their fellow classmates to take action to curb the spread of vandalism.

Senator Sarah Anstaett ‘18, a political science and economics double major from Dayton, Ohio explained, “In October, the Campus Affairs Council reported that at that point in the semester we have had more incidents in proportion to previous years. Physical Plant does a very good job taking care of vandalism before students hear about it. It helps uphold our image of our campus but it is also problematic because students don’t realize the magnitude of the problem.”

However, those who are caught engaging in acts of vandalism are subject to Denison’s Restorative Justice Programs. Thill says that, “If you do get caught you will meet with the Assistant  Director and the RA and talk about what happened. The student usually has to redo what they destroyed. It is supposed to teach people who vandalize that what they did had a real impact on someone.”

Some students living in Shorney expressed their disapproval of the amount of damage done to their dorm hall in the past years.

For example, Senator Caroline Mills ‘18, a political science major from Avon Lake, Ohio, stated, “[Shorney] is our home and we are expected to respect and protect each other’s property and possessions, along with what the university has provided for us.”

Mills wanted to remind the student body that, “We should appreciate this beautiful campus that has been entrusted to our care.”