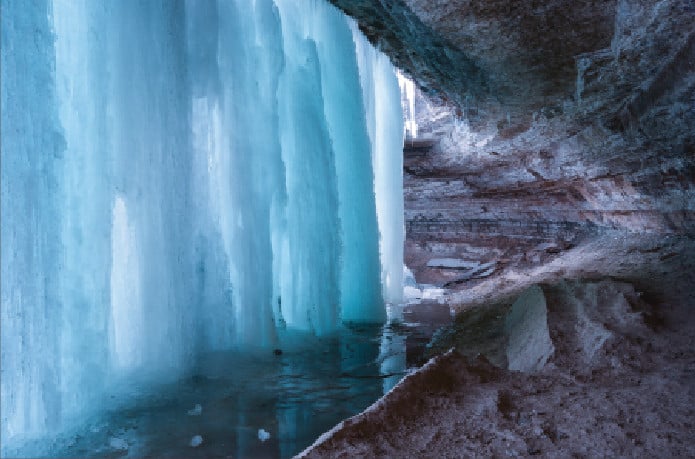 Zane Osler’s “Restricted Access” Art Exhibition made the risky riskier, the indecisive confident and those terrified of heights willing to take leaps of faith. From my perspective in the crowded hallway of Bryant Arts Center, Osler ‘16 proved his prowess at photographic technique and revealed an eye that many a photographer would envy.

“Geometric and amazing, something so different,” said Shivani Mithbaokar ‘17, a Fine Arts student from Mumbai, India.

In his gallery full of Chicago landscapes, crumbling buildings and hidden nature, Osler captured the uncapturable and asked the audience to take a risk; peering over the edge of Chicago skyscrapers or up at remote glacial giants.

I saw many struck with ethereal satisfaction at the sight of beauty–a beauty that buckling knees would have never permitted.

“Maybe the most beautiful sites are rewarded to those who take the risk to find them,” Grant Veltman ‘15 said.

I found that often the pieces held hints of childhood adventure, discovery and escape. Buildings jumped and swayed creating a visual playground for the viewer. As some commented during the exhibition, Osler’s collections of corroding buildings revealed the fragility of man-made structure.

Inversely, nature’s vibrant longevity pulled at the viewer, making one want to leap through the paint-peeling windows and into the sea of green beyond.

While the photos might have been abrasive, but only in how they physically pushed the viewer to places they did not necessarily want to go, the photos also brought viewers back to the place they call home. “Emotional…pride,” were two words that came to mind for Chicago local Lola Schalekamp ‘17.

The last photo of the exhibit emitted only the sound of silence. As I stared, I could not tell if the pictured sun was setting or rising, but upon careful observation of the empty streets, a near impossible scene in Chicago, I realized it was undeniably rising. It was a fitting metaphor for Osler’s photographic future.