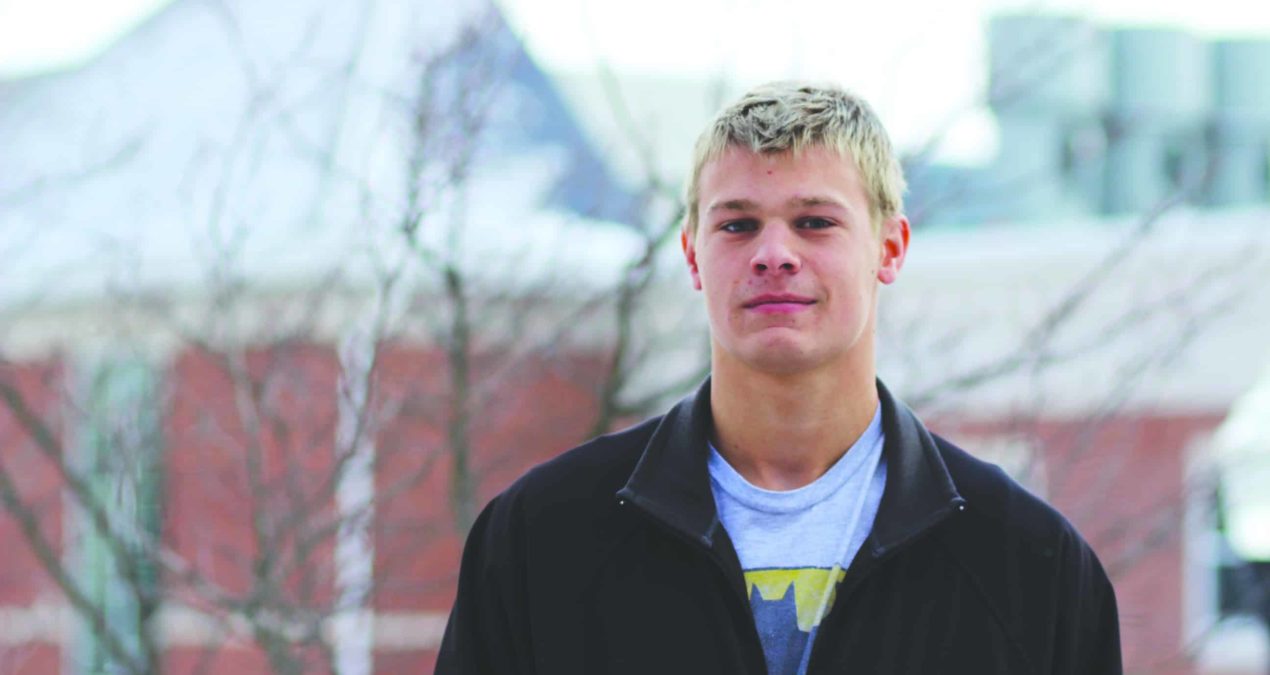 Have you ever wondered what swimming a mile feels like? Stuart Hohm ‘18 explains: “Imagine you walked up to the fourth floor of Knapp, down and then up again, and that’s what your legs feel like, and then you have to do a handstand and go down to the third floor of Knapp, and then back up.”

That explanation almost perfectly characterizes the way that Hohm thinks –analytically and carefully. The freshman has had a banner rookie season for the Big Red swim team. In additioning to winning the majority of his races, he is currently ranked in the top five in the nation among Division III swimmers in the 500 free and the 200 free, according to CollegeSwimming.com.

Hohm, who hails from Springfield, Ill., began swimming at a very young age. In fact, he says that, “It is something that has been a part of my life since before I could walk.” Both of his parents swam competitively in college; his mother at the University of Iowa, and his father at Wheaton College.

Swimming is a family affair. “We had a pool in our backyard and I was walking before I was swimming, but my younger brother, we have pictures and videos of him swimming before he could walk, so that’s something that’s always been part of our family and something we’ve done,” Hohm says. “Up until I was 12, my parents and I did workouts as a group and then I got into club swimming but it’s always been a family thing for us.”

Hohm’s favorite aspect of swimming is rather unorthodox for a long distance swimmer. “My favorite part about swimming is going fast. I love going fast,” he said. “I’m a miler, so I don’t get to go that fast, but I like moving fast through the water but at the same time I like floating under the water, closing my eyes and feeling weightless.”

“If I could choose, it’d be pretty cool to be a sprinter but at the same time, I really like that big number of yards and punching something out and doing a 500 in practice and going as fast as I can and inherently, you can’t be a sprinter if you like doing those things.”

The freshman recently captured two event titles in the Big Red’s final dual meet of the season, against Ohio Wesleyan, on Jan. 31. He has been working to improve his mentality during races. “Up until last week, I’ve been trying to get my mental edge back because in something longer it’s very easy to let your mind wander and think about something that’s not necessarily your race,” he said. “It is a challenge to keep yourself mentally focused like that, but I’d rather realize that now than in two weeks from now.”

When most average people think of swimming, images of Michael Phelps’ infamous 12,000 calorie a day 2008 Olympic diet tend to emerge, and while Hohm says that his calorie intake is nowhere near that amount, he still consumes a fair amount. He recalls a high school health class assignment: “I was able to establish generally what I ate, and on a typical summer day after my sophomore year of high school I think it was about 6,000 to 7,000 calories a day.”

Putting his notable talents as a swimmer aside, Hohm is also very academically inclined. He is a biochemistry major, and hopes to one day attend medical school and become a doctor, although he is not quite sure what field he will specialize in.

“There are so many possibilities and so many new things being created all the time that I’d rather just wait until later to actually decide if that’s what i’m going to take and that’s what I’m going to do,” Hohm says.

His chemistry professor, Dr. Yu Liu, says that Hohm’s evident interest in the sciences is what makes him an exemplary student. “I think what makes Stuart great is that he has real interest in what he is learning in the chemistry class, which, to be honest, is rather rare for sciencey stuff: a lot of times, science seems to be rigid and unapproachable to many students.”

Sometimes, Liu says, Hohm even keeps the class discussions afloat: “He obviously has a very effective way to digest and absorb knowledge as his own. I don’t know what his magic is, and I’m really curious about it. He does save my day from time to time: you know how awkward it is when you ask a question and the entire class just becomes silent? Stuart is usually the one who picks up those questions.”

Hohm says that he is always interested in learning new things, especially because his father is so knowledgeable about different topics. “One thing I always like doing with my dad is because he knows so much more than me, I always try to get a little bit of it to rub off. So, we’ll have conversations where we’ll talk about some random, completely abstract idea.”

His roommate and fellow teammate, Jake Von Der Lippe ‘18, says that he and Hohm have had similar conversations. “We used to have super long talks about how [superheroes] got their powers and we probably went into more depth about time travel than most physicists have,” Von Der Lippe said. “We started going into negative dimensions and stuff, and we’d never even heard of that before.”

When Hohm is not swimming or contemplating some scientific phenomenon, he enjoys solving Rubix cubes and biking. He has solved a 3×3 Rubix cube in 31 seconds, and can typically complete that same sized cube ten times during a fifteen minute time period.

He loves biking for the same reason that he loves swimming: “I like road biking because it’s similar to running because when you’re running or biking, you can go outside,” Hohm said. “But when you’re on a bike, you’re able to go a lot faster, and I really like going fast.”

Hohm’s academic endeavors paired with a strong work ethic are very much the picture of the ideal liberal arts student. Of Denison, Hohm says, “[Denison] feels very much like home. Sometimes I lose that feeling, but then I look around outside, or on the walk back up from Mitchell at 7:00 a.m. when everybody is still asleep after a 5:30 practice, I get that feeling back and it’s really cool, like ‘This is where I get to go to school.’”

Divers light up at regionals