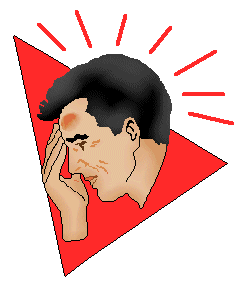 The first time is always the worst.

The first head injury is always, for the lack of a better word, special.

The sounds of the helmet crashing, it’s deafening, yet it’s not that loud.

“It felt like my brain was floating on a cloud inside my head,” Nic Latham says, a former Denison student athlete who had to be excused from playing due to excessive head trauma from lacrosse.

For the amount of talk that goes into head injuries causing memory loss, the first concussion seems to stick in the brains of the affected like superglue.

Latham, the former midfielder and a face-off specialist who earned all-state honors as a junior in high school, continues, “It was April 30, 2011. I was knocked out for 10-15 seconds or so and then was very dizzy. Once the adrenaline came down from playing, I got a pretty bad headache and whiplash to the point where I couldn’t move my neck for a week.”

“I didn’t do anything but sleep and lay down in a dark room for a few days, head was ringing, noise bothered me.”

Speaking of concussions, the National Football League has recently come under a lot of scrutiny for its possible immoral disregard of player’s safety when it comes to concussions and future mental health.

In fact, a judge recently threw out a $765 million dollar lawsuit brought against the NFL not because of its validity, but because the judge did not think that that amount of money was enough.

But is the sport, or the governing body of the sport, to be blamed, or should the players know what they are getting into?

Therein lies one of the toughest questions future generations will have to answer, while we peddle around with possible answers. And yet, I can’t, and won’t, try to answer this question, as it would be a foolish endeavor on my part. Instead, I find the pursuit of sports, even in the face of scientific evidence and traumatic experiences, intriguing.

Latham was no beginner when it came to head trauma, as he sustained two concussions (possibly three, he’s not sure) throughout high school in lacrosse, with his second coming right before attending Denison.

“I maybe wished I stopped playing in high school, because the lasting effects never came until my third concussion (the one while I was at Denison),” continues Latham.

And Latham’s lucky to only have some minor pain, as emergency rooms have recently been getting chock-full of concussion-impacted patients.

“The number of people ages 19 and younger treated in emergency rooms for concussions and other sports-related injuries not resulting in death increased from 150,000 in 2001 to 250,000 in 2009,” according to healthline.com.

This should be shocking, right?

With numbers like this, younger kids are probably weaning away from contact sports, for their safety and for the sake of their parent’s blood pressure?

According to ESPN, American pop warner football, which is organized football before high school, has seen a 9.5% drop in athletes the last two years, but there are still 225,287 kids who play in the league and 2.5 million between the ages of 6-14 for NFL-funded USA football. In total, this is about 2.75 million kids, each year, who participate in tackle football.

Okay, well the year is 2014, science has progressed enough to make sure helmets are sound in protection, right?

Unfortunately, no. This same study also gathered up all available research and concluded that there is “Not Enough Evidence to Support Claim That Helmets Reduce Concussion Risk.”

Yes, there is “Not Enough Evidence to Support Claim That Helmets Reduce Concussion Risk.”

I’d like to make that statement stand alone, to leave it on the page and end the article in dramatic-climatic fashion like the final twist in the movie, but I would be doing disservice to the reader, to the possible athlete.

And this statement rings, literally, in the minds of the concussed, for possibly a long, long time as Latham has been experiencing pain for nearly a year now.

“I see a neurologist and they prescribe some headache medication and pain meds.” Latham continues, “Usually they say rest and it will go away over time…not really any treatment. I still have daily migraine headaches that I haven’t had relief from since [my last concussion]. It can affect my mood/irritability and energy still too. Those are the ‘Big ones’.”

He could go on, I’m sure, but to save space and to summarize Latham’s symptoms: he is in pain, the type that cannot be accurately or effectively treated, and the type that may not go away for a long time.

But, even through all of this, Latham’s still not sure if he wouldn’t do the same thing again.

“’Was it worth it?’ is a tough question because now I can say no with the hindsight,” continues Latham. “But at the time I didn’t really think of it because I thought I recovered well from the first two. I loved playing lacrosse and I’m sure I would still love playing. It would have been hard to stop playing while I still thought I was healthy. But, once you get multiple concussions, I think you are just playing with fire until you get one that has more long-term effects.”

Latham will not be the first, and he will not be the last athlete of his kind. And if science can’t come up with some solutions soon, the question for every family, kid and coach becomes:

“Are  athletes playing with fire?”