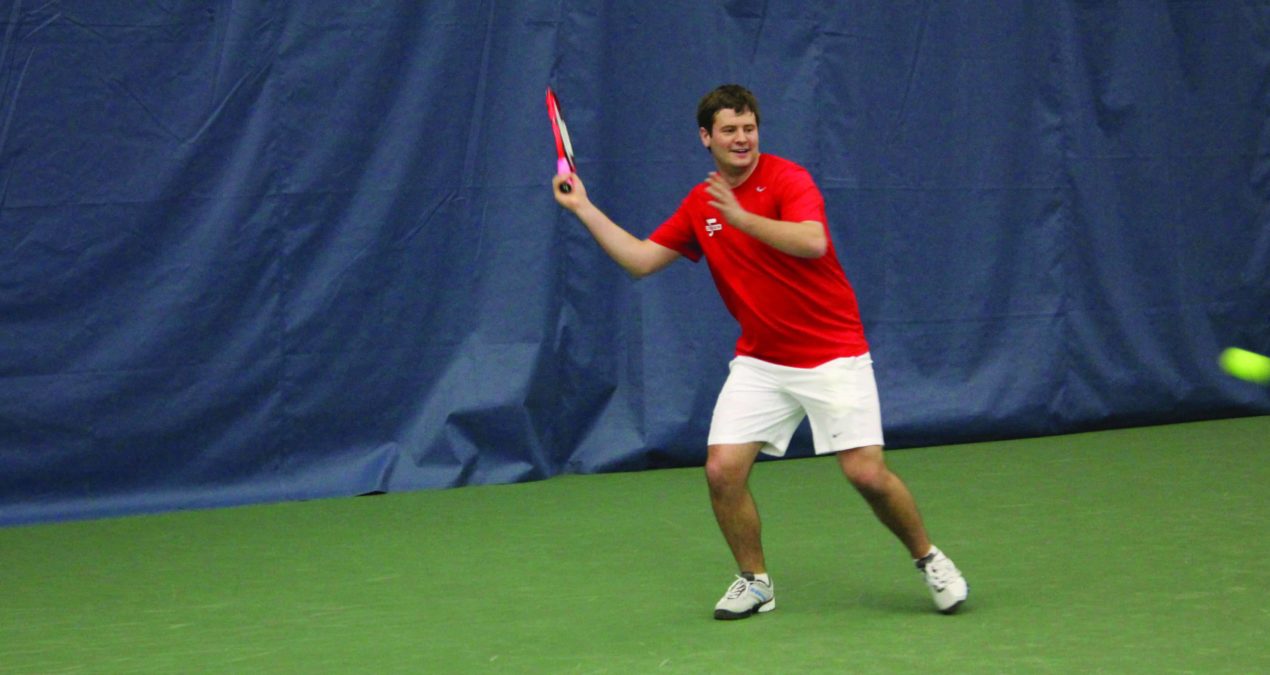 The DU men’s tennis team watched with bated breath as Grant Veltman ‘15 prepared to serve match point to sweep the doubles against the Fighting Ducks of the #40 Stevens Institute of Technology.  He tossed the ball several feet into the air before smashing it across center court to begin a few seconds of volleying between Veltman, his doubles partner, Casey Cempre ‘15, and their opponents.

Cempre found the angle he had been hoping for, and sent the ball sailing off of his racket past one of his lunging opponents to secure the third victory of the three-match doubles sweep over the Ducks.

The victory represented the critical momentum boost that would power the Big Red to their first win in the Mary Washington Invitational and the season.

Going into Sunday, the second day of the Invitational, the squad was searching for redemption after a string of rough matches against their hosts, #15 Mary Washington and N.C. Wesleyan.

DU had only come away with wins in three of their 18 matches from Saturday. Owen Smith ‘17 was instrumental in each of the team’s three victories.  Partnered with Grant MacPherson ‘18, he was able to outlast a pair of N.C. Wesleyan opponents 9-8, and later was able win both of his singles appearances.

Despite a valiant effort from Smith, DU fell to N.C. Wesleyan’s Battling Bishops 7-2, and to the Mary Washington Eagles 8-1 on Saturday. Even with the losses, Coach Peter Burling was proud of DU’s persistent spirit.

“I can’t stand a team of players who doesn’t fight to the finish no matter what the circumstances are,” Burling said. “Even though the matches were lopsided for the first two, everyone dug in, which was great and the scores were close.”

In the final matchup of the weekend, against the Fighting Ducks, the Big Red would tighten up their performances and earn a 6-3 victory over SIT.

Jackson O’Gorman-Bean ‘16 and Jeff LoDuca ‘15, and Smith and MacPherson would each contribute a win before Veltman and Cempre finished off the doubles sweep.

The coach was especially impressed with the squad’s performance in their doubles matches against the Ducks.

O’Gorman Bean, LoDuca and Smith would all tally singles victories to push the Big Red to a 6-3 win over SIT.

LoDuca was confident after watching the squad’s performance on Sunday.

“I think the team came together; I think the energy was high after sweeping the doubles, and you could feel that energy in the building throughout the singles,” LoDuca said. As far as the weekend as a whole, LoDuca was pleased with the way it ended but he knows there are a lot of things to improve on before their next match.

“I think we ended on a high note, it was a big confidence boost for the team as a whole.  We need to keep our return percentages high, we needed to keep the ball in play because the key to winning doubles is to be able to break your opponent’s serve.  We served pretty well overall, but returns are weakness for us.”

DU will look to improve on their weaknesses in their next meet in Kalamazoo, MI, where they will face the Hornets of Kalamazoo College.