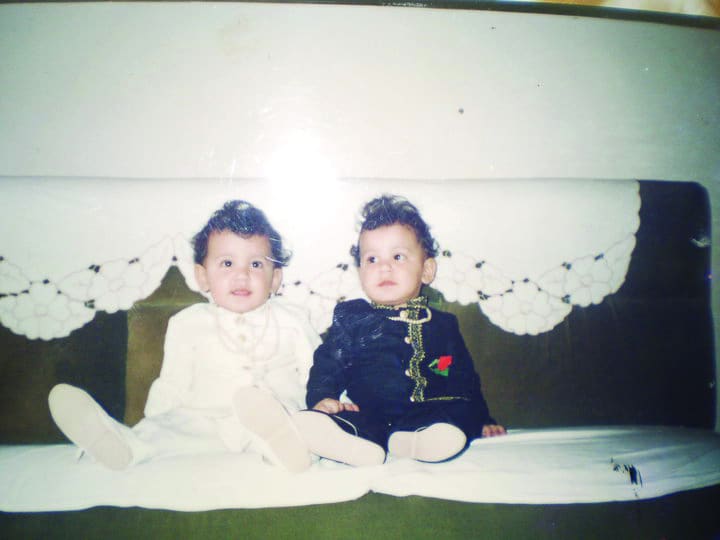 Imagine sharing your whole life with your best friend. Economics majors Rohin ‘15 and Raghav Daswani ‘15 have been lucky enough to share their whole lives together as best friends and twin brothers.

The twins grew up in Calcutta, India with an older sister who graduated from the Massachusetts Institute of Technology. They often took family vacations to places such as South Africa and countries in southeast Asia. They said that growing up, there was a lot of fighting about silly things such as the last bite of popcorn, the last cookie and having to share a bedroom. Raghav Daswani ‘15 and Rohin Daswani ‘15 (front row) with their sister Samira Daswani who graduated from Mass. Institute of Technology.

The Daswani twins are extremely involved on campus. Rohin lives in Sunny C and is the president of the Denison International Student Association. He is also heavily involved in leadership on campus. Raghav is the head resident of Shorney and is involved with the dining hall committee. Rohin says that being involved in a lot on campus “just happens over the years.”

Recently, they have been recognized for their exemplary leadership skills. They won the Distinguished Leadership award which is given to graduating seniors who lead and serve the University through their involvement in student organizations, co-curricular activities, on the Admissions and Residential Education staff, as athletes and scholars and as members of our campus community.

When asked if they had planned on going to college together, or creating their own paths, Raghav said, “We wanted to stay as far away as possible.” However, that is the exact opposite of what happened. With the help of a college counselor, the twins applied to roughly 15 schools each with only about four or five of those schools in common, including Denison. Solely by chance, the almost identical twins ended up at the same college.

Attending the same school is not a foreign concept for the Daswani twins. Back in India, they also attended the same schools. Rohin explained that, “In India, you are in one school for your whole life so you grow up with the same people. Because that was the case, our mom put us in different classes to develop different friend circles.”

Once the twins began high school, they began to see their friend groups coming together. At Denison, Raghav says that the mixing of friends is even more common than it was in high school. But friends have never been a troubling issue for these twins. People often confuse them as one another, so they make double the friends. When Rohin finds himself in one of these situations he said, “I just go along with it, but I say hey, I’m not Raghav, but I’ll tell him everything you told me.”

One specific instance that Rohin remembers from freshman year was an encounter in Curtis. He said, “I was sitting in Curtis and didn’t have anyone else at the table. A random guy asked to eat food with me. Initially I was confused, but I said sure. We talked for 15 minutes, then I told him that I wasn’t who he thought I was. He didn’t believe me even after I showed him my student ID. He didn’t believe that I had a twin.”

People often confuse the Daswani twins, and they use that to their advantage by pulling pranks. For example, Rohin said, “Freshman year we had a class in the same building, Barney Davis, so I was free and he had a class, so I sat in for him in his class. A couple of my close friends realized that it wasn’t him. The professor found something suspicious because Raghav usually dressed up to class, but I didnt.”

The twins like to be very mischievous. Rohin said, “We’ve convinced people that we aren’t actually twins and that we are just very good friends. Then they don’t believe we are twins when we tell them the truth.” Each time this happens, Raghav said, “everytime we meet someone new.” Rohin explained that, “We don’t tell people we are twins, and it’s funny when they discover it themselves.”

Rohin then explained that, “It is hard for us to really get mad at eachother. If I get mad at him it lasts for maybe five or ten minutes.” Raghav said, “If we start fighting, people just laugh at us because we are twins.” They often fight about simple things such as who gets to drive the car to and from Columbus. Even though Rohin is a minute older than Raghav, Raghav still believes he is the more mature twin. Though each twin would describe his brother as annoying, they are always there for eachother.

In the working world, the twins do not see themselves collaborating in the future. When asked if the separation would be weird, Rohin said, “Every summer we do our own thing, and it’s not weird. We have the twin connection so it doesn’t matter.” They do believe they have twin telepathy, but Raghav said that people often do not believe them.

Raghav said that he gets a daily life speech from his brother. These speeches consist of life advice to correct each other’s problems. Rohin knows exactly what he wants to do after graduation. His dream is to work in the government in India, but for now, he plans to start off in Washington, D.C. Raghav, on the other hand, is unsure of his future plans. “My dream job is to be an entrepreneur.” He expressed a passion for the food business and could potentially see himself running food service companies. Both twins eventually want to move back to India in the long run.

It was very difficult for the brothers to come up with any negatives about being twins. Rohin explained that people often assume that as twins, they would have some sort of identity crisis, but he said it is nothing like that. He said, “I think we are very very different people. We compliment each other very well.”

Students dress up for the Cherry Blossom Festival