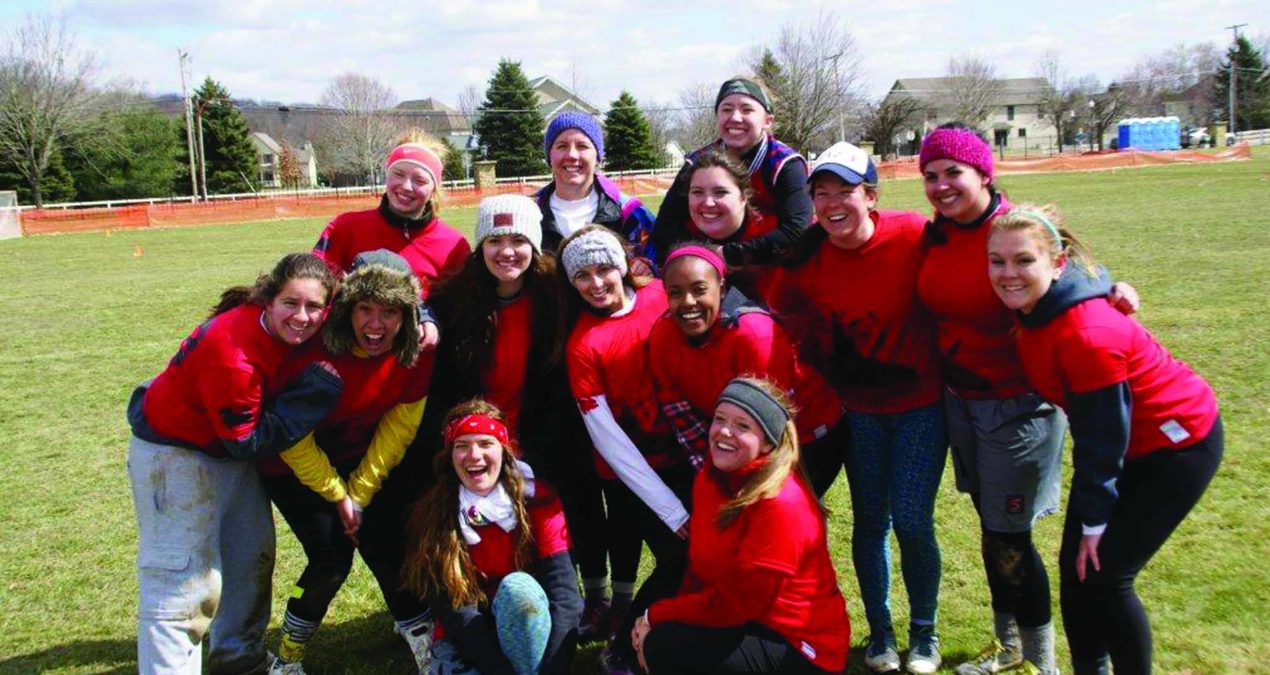 Not all club sports teams’ play on snow covered fields in below freezing temperatures. But this is common practice for club ultimate Frisbee teams such as the ones that flocked to Granville to play in Disc-Throw Inferno 2015—Denison Ultimate Frisbee Club’s home tournament. This past weekend more than 20 teams competed in the tournament held on the grounds of Bryn Du Mansion.

It is not easy to organize a tournament especially one with so many teams. “Planning the tournament required a lot of organization on the front end,” said Franklin Gaglione ’15, DUFC captain and Vice-President. “My role as tournament director required emailing and coordinating with 20 other ultimate teams, creating schedules, booking port-o-potties and buying bulk orders of food, along with manually creating 10 ultimate fields with the help of other teammates at the Bryn Du Mansion in preparation for the weekend.” Gaglione along with Teresa Smit ’15 and Gianna Maiorino ’15 planned and organized the entire tournament. Sarah Williams ‘15 preparing to hick the frisbee down the field during DLUC’s (Denison Ladies Ultimate Club) game against University of Dayton.

Playing in all kinds of weather conditions usually means tournaments such as the frigid one this past weekend don’t attract many spectators, but Emily Pugliese ’17 and Lauren Wilhelmy ’17 bundled up and went to the fields to support their friends on the ultimate team.

“I really enjoyed the rousing atmosphere and Denison support,” said Pugliese. “These people are true athletes who were brave through the nipping temperatures.”

So what draws so many college kids into a sport where it is normal to play six to seven 80 minute games in a weekend in almost any weather conditions?

According to Gaglione it’s the intensity of the sport combined with the team atmosphere.

“In terms of strategy and play, ultimate is a showcase of skills found in soccer, football, and basketball all thrown into one. The pace of play demands great sprinting ability and endurance athleticism, along with high levels of field awareness through a variety of weather conditions,” said Gaglione. “I think the team represents a great opportunity for athletes who do not wish to compete at the NCAA varsity level but still desire to continue their careers on the athletic field along with fostering a friend group associated with a sports team.”

Ben Wortham ’16, co-captain to Gaglione, believes that ultimate is about more than simply the sport itself. “The Ultimate Frisbee community as a whole is incredibly close knit and friendly,” said Wortham ’16. “Anytime I’ve met a fellow Ultimate Frisbee player there is an almost instantaneous bond that comes simply from playing the same sport. Even at the end of a heated hyper-competitive game there always seems to be a friendly bond between players on opposing teams and I think that speaks volumes about the Ultimate Frisbee community as a whole.”

Although each player on a team wears a jersey, there is a clear emphasis on style that comes along with playing ultimate.

“Ultimate is 90% style and 10% skill,” said Wortham who was sporting a backwards trucker hat and neon blue cleats. Even though players wore many layers to combat the cold, their own style was still clearly visible. It was common to see multiple players on a team wear trucker hats, bandanas, or both. And there was no slacking when it came to wearing neon or brightly patterned clothes.

These students were on the field not because they had to be there, but because they wanted to be, which is what “Frisbee culture” is all about. It was clear that even though temperatures were low, spirits were not. As said best by Sarah Williams ’15 “Regardless of how frozen the ground was as it swept across the field, spirts were high and laughter was abundant.