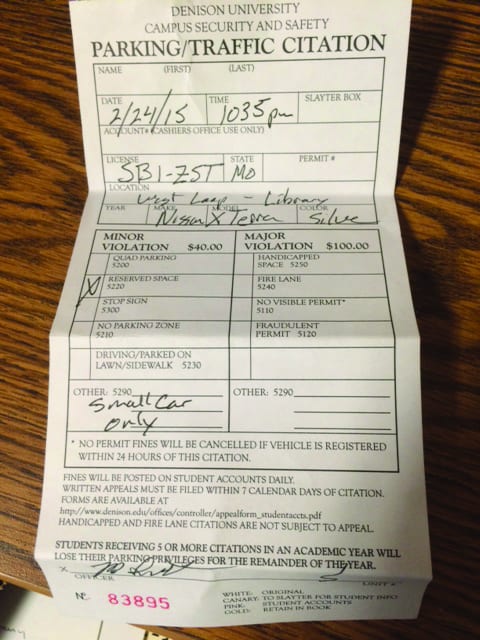 Have you ever circled campus trying to find a parking spot and were unsuccessful? Have you ever parked illegally because there are genuinely no other places to park?

If you have answered yes to either of those questions, you are not alone.  It seems to be a common topic of discussion among students that there is just not enough parking on campus for the amount of students who brought cars.

Katie Mahaffie ‘16, a sociology major from Bethesda, Md., stated, “I think parking on this campus is ridiculous for a number of reasons.  They shouldn’t be accepting registrations if there aren’t enough spots available in a certain zone. I also see all over campus how there can be a ton of different spots made out of different spaces.”

Students also find that the restrictions on where they are able to park on campus is limited and stressful.

Scott Kepler ‘16, an economics major from Chatham, N.J., said, “I think the amount of spots don’t match the amount of traffic the school has but a lot of that also has to do with the area available on campus for parking.”

Brittany Loderek ‘17, an economics major from Glenview, Ill., said, “I feel like students are getting ripped off by the amount the tickets are.  I received a $100 ticket during the swim meet when we couldn’t park behind Mitchell and I was forced to create a spot behind Crawford.”

Students often mention that they feel campus security is relentless and it is hard to get tickets appealed.

Bitsy Waters ‘18, a political science major from Ithaca, N.Y., has received her fair share of tickets.

“Being a freshman my car is parked all the way down behind the Sunnies near the IM fields,” she said. “That is fine except for in the winter when they never shovel the stairs and it’s an icy death trap so I just park behind Shorney and get creative with excuses when I get tickets.”

It is evident that the overall opinion of students in regards to parking is negative and they feel that something must be done in order to change the way students park on this campus.

Is North Quad a Dry Quad?