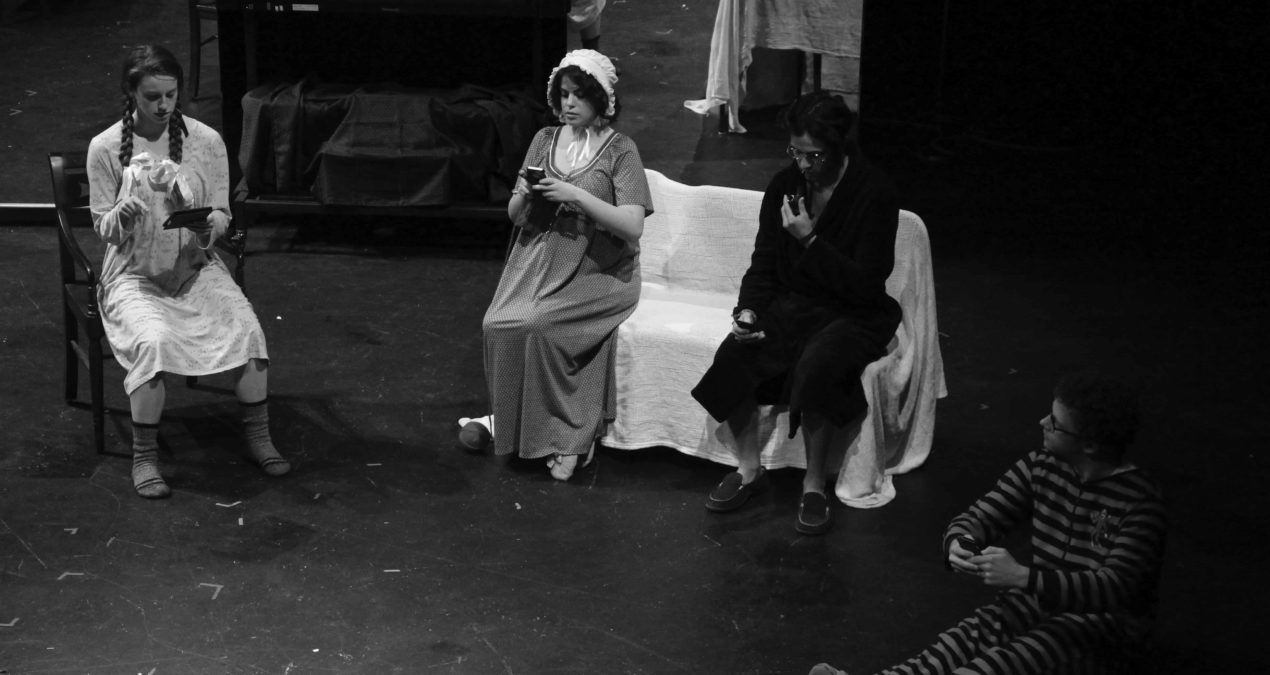 On April 4, I spent the first hour of this semester’s DITA One Act Play Festival in pain. Not because of the performances, but because the opening piece, “Dinner Time,” caused some serious guttural laughter (complete with little tears). It was cringe comedy and it was gold. Donald even shows his “almost 30 year old” son how to put a condom on, complete with illustrated instructions. Betts and Kindler are two of Denison’s comic treasures, and “Dinner Time” allowed them another chance to let their freak flags fly.

Almost all of the pieces that followed were comedies, a notable change from past festivals. “Damsels In Distress Anonymous,” written by White and directed by Nick Radmer ’18, was a pop-cultural folly about a support group for (mostly) fictional women who can’t stop being “rescued” by their male counterparts.

The women had to keep hiding in “Elks clubs and Presbyterian churches,” but the men in their fantasy universes kept finding them (Link, played by Will Hamilton ’17, and Mario/Liam Neeson, played by Drew Bailey ’17). Eventually they settled on the White House since “Michelle is a very good friend of mine,” quipped Skorepa, but then Bill (Hamilton) found Hillary. With its video game and TV references and the nod to Hillary’s political prowess, “Damsels” was a hit.

John Williamson ’15 wrote two pieces, “Robert Forgives Himself” and “A Family Christmas.” The former was the only truly serious work of the night, starring Aaron Robertson ’16 as Robert, and Peter Malicky ’18 and Robert Templehof ’18 as “the voices in his head” on a hunting trip. The talent of the trio was undeniable, particularly Robertson’s powerful performance, but the script was perhaps too long and didn’t pack as much punch as it could have. “Christmas” was an ode to being attached to one’s cell phone, with the family behaving like androids as they opened their presents and suddenly became somewhat human again. It ended on a dark and abrupt note, despite being rather clever until that point.

As it began on a high note, the festival ended on one as well. “Fast Car,” written by Betts and directed by Sara Blike ’15, was a different kind of one-act, with no dialogue after three friends (Gianna Maiorino ’15, Will Blount ’15 and Matt Harmon ’16) decide to road trip with Tracy Chapman’s “Fast Car” blaring. Slapstick and a little morbid, we saw the friends smoke, rob and shoot up a gas station, hit a cop, take down a murderous hitchhiker and finally drop a friend’s wedding ring in the Grand Canyon (their destination). Was it bizarre? Sure. Was watching Harmon gingerly descend from the Burke Black Box balcony on a rope into the “canyon,” all while hearing Chapman’s beautiful tearjerker, worth it? Yes.