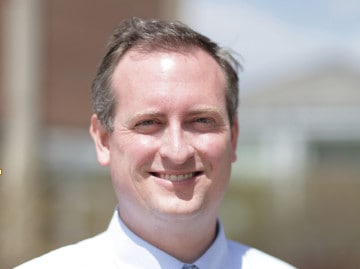 Bill Fox is a man on the move.  Despite suffering an injury that has limited his mobility this semester, it is evident Dean Fox has plans to innovate and move student development forward. Dean Bill Fox serves as the Dean of Students in the Student Development division of Denison University.

Dean Fox came to Denison in 2007 after receiving his M.A. from The Ohio State University and working at Georgetown University with student affairs. Bill Fox described the appreciation he felt to be given his first opportunity at Denison when he applied for the Director of Residential Education at Denison, he says, “ I submitted an application and was thrilled to be offered the position.”

After moving to Granville from Washington D.C. to serve as the Director of Residential Education, five years later he was offered the role of Dean of Students. The move to Granville is described by Fox as “An attractive move but there were a lot of unknowns because I never had lived in a town of three to five thousand people.” Dean Fox sites “a love for central Ohio and for Columbus” and having family in the area as mechanisms to help his family transition.

When Dean Fox moved into his new role, it became evident to those around him that he had big plans for the Student Development division.  Fox has attempted to forge closer relations between the College on the Hill and the town that it calls home.  Fox believes the community leaders of Granville , “all care about this place and they care about the relationship with Denison.” Fox goes on to elaborate, “Its been wonderful to be part of some of their process and we meet regularly with their leadership about routine things.”

Going forward, Dean Fox foresees an active role for Student Development in innovating new ideas.  Fox says, “Truthfully, we have remarkable students  with amazing ideas and fantastic capabilities to see those ideas move into action.” Dean Fox also contends, “The strategic plan moving forward, I so much appreciate  how Dr. Weinberg and the senior staff of the college and the board has wanted to do a lot of listening to our students.”

Fox summarizes the work that he does as focusing on “student success and persistence  and retention. I am glad that has become a focus moving forward.” Dean Fox’s  role as Dean of Students has drawn high praise from other members of the Senior Staff of the College.

Director of Research, Julie Tucker ’09 states, “Bill’s dedication to our students is evident in numerous ways–whether advising student government, cheering students on during athletic events, or helping students succeed by counseling them through personal or academic issues. Bill’s sense of humor, commitment to students, and genuine empathy not only make him a fantastic Dean of Students but a dear colleague and friend as well.”

Dean Fox also singled out how he believes that Denison should, and is supporting all students. Fox says, “We believe all students should have a fantastic experience here. We want all resources of the college to be available to all students.” Fox goes on to state, “I think we position ourselves best when we listen first and foremost and when we are open to collaborating.”

The Nest and its infamous flatbreads return with a bang