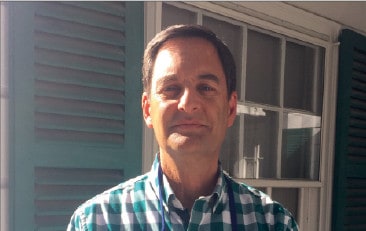 Dave Bussan ‘77 has spent a lot of time on the Hill. With a grand total of 33 years of time as a student, artist in residence and assistant professor in cinema, Bussan continues to perfect his craft: filmmaking.

After attending graduate school at the California Institute of the Arts in Valencia, Ca., a college just north of LA, Bussan worked as an artist in residence for six weeks in the cinema department. Following this experience, Bussan did freelance work in Columbus for about two years. Following this position, he was offered a job working as an assistant professor in the cinema department.

One of his most recent accomplishments is the publishing of his new film entitled The Gospel According to Charlie, which he wrote, filmed and produced. After working for eight years on the film, it was finally premiered at the Athens International Film & Video Festival.

Bussan worked on and off with a team of one current student (Logan Floyd ‘16) and eight Denison alumni. The film is a documentary about a local artist, Charlie Van Ness, who went through various life changes throughout the course of filming.

Before Bussan became a filmmaker, he was simply a student, newly enrolled at Denison University. A native of North Canton, Ohio, Bussan thought that he came to Denison to major in biology to later become a landscape artist.

However, taking the goals of the liberal arts seriously, Bussan continued taking classes in several different departments, though his History of Cinema classes triggered his desire to be a cinema major. He said, “I recall remembering that I needed a major, and I realized that I kept taking cinema classes.”

During his time at Denison, Bussan has seen four different Denison presidents who have assisted in completely changing the culture of Denison since Bussan’s arrival in 1977.

When the alum turned assistant professor arrived at Denison, kegs welcomed first year students on the quad in front of the Curtis residential halls as an opportunity for the freshmen to bond with their fellow classmates.

“The law at the time allowed those who were 18 and up to purchase low-alcohol beer,” he said. “It was a much looser time in general on campus. No one in the administration cared about open containers or smoking pot. It was kind of a live and let live era.”

But when Bussan came back to Denison in 1987 as an artist in residence, the laws had changed as the government decided that states that did not raise/enforce the drinking age to 21 would no longer receive funding for highways. “That was one of the mistakes the country has made,” Bussan commented.

Greek life was also instrumental to Denison’s culture while Bussan was a student at Denison. He said that rush took place during the first semester of students’ first years. All interested men were invited to come down to the houses to explore Greek life on campus, but Bussan said that he was not interested. He said, “The school is already too small to segregate [it] further.”

But in the years following his return to Denison as an artist in residence in 1987, Bussan noticed changes in the culture of the school, and he played a role in some of the changes. Bussan was invited to serve as a faculty member on a committee looking into deciding what to do with the Greek system in 1995.

This committee, which worked with the Campus Affairs Council (CAC) and also included students, decided that the best way to resolve the issue was to remove Greeks from their houses. They reported this finding to the Board of Trustees who ultimately made the final decision.

Those who knew Bussan in his early time at Denison were appreciative of the impact he made on campus. Martin C. Jones ‘86, who was a cinema major at the time and knew Bussan during his early work as an artist in residence, said, “Dave was a very assessable mentor, and I really enjoyed working with him during my last two years at Denison. He was a great advisor, and teacher too.”

Jones continued, “I was so impressed by the maturity and creativity of his grad school films. His films were so engaging, polished and sophisticated. It was eye opening to have direct access to such a talented filmmaker right there at the former Cinema Annex.”