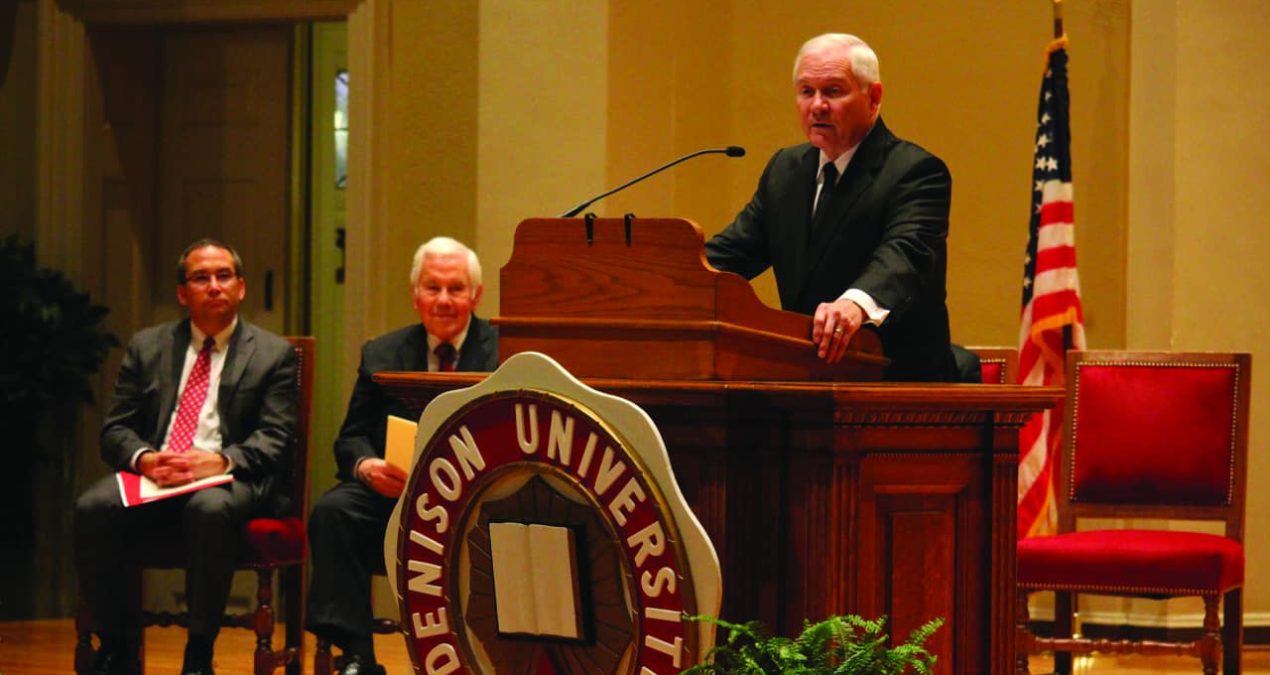 Robert Gates was a freshman on the pre-med track at William and Mary College in 1961. “God only knows how many lives were saved by my becoming a CIA Director and Secretary of Defense rather than a doctor,” he says.

The 22nd United States Secretary of Defense, Gates served eight presidents and was awarded the Presidential Medal of Freedom on his last day in office for President Obama. He spent nearly 27 years as an intelligence professional and served as director of Central Intelligence from 1991 to 1993. Gates spent a day on Denison’s campus this past Thursday, April 23.

Throughout the day, Gates visited classes, had meals with students and remarked that the questions he had been asked were more thoughtful and introspective than some of the conversations he had in Washington. He ended the day with a speech in Swasey Chapel.

Opening his speech by addressing what a “pleasure” it was to be outside of Washington D.C., Gates drew laughs from the audience. He followed with jokes about the egotistical nature of the city and the people he had worked for. Personal anecdotes of his time with former President Lyndon B. Johnson and former Secretary of State Henry Kissinger drew laughs from the crowd and painted him as a jovial and smart character.

Gates’ speech had an emphasis on public service, especially in relation to how leadership and service at home affects the U.S. in a global context. “The biggest threat to national security lies not abroad, but in the two blocks surrounding the White House,” Gates said.

Gates had nothing but kind words for former U.S. Senator Richard Lugar ‘54. Denison alumni, Richard Lugar has been on Denison’s Board of Trustees since 1966 and helped establish the Richard G. Lugar Program in Politics and Public Service in 1994. Dr. Gates spoke of Lugar’s time in office as “bridge-building” in relation to partisanship, and focused on the importance of getting things right.