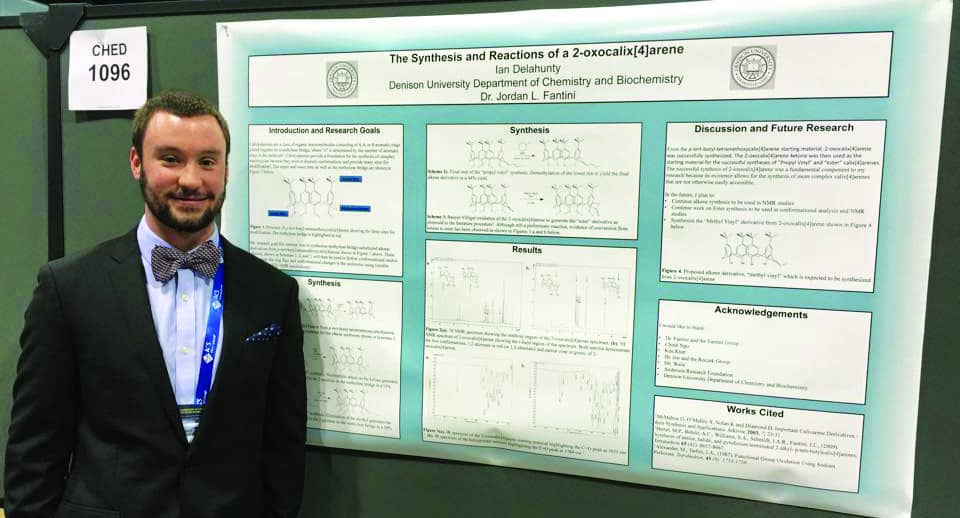 At 5:45 on Monday mornings, swimmer Ian Delahunty ‘16 partakes in the first of his ten grueling practices of the week. However, during the afternoon, he is heavily involved in his independent chemistry research project, which he hopes to use to create molecules with multiple biological applications.

“Athletics were always the most important thing in my life…when I came to Denison I was always in love with the sciences, but it was chemistry where I excelled the most,” Delahunty said. “After I retire, I need background in something else other than swimming. With swimming, you’re not going to make a career out of it.”

Over the summer, Delahunty stayed on campus and conducted an independent research project with the chemistry department. He would work for 40 hours per week in the lab, in addition to time he spent working and preparing outside of the lab.

While doing this intensive work, he also made time to go to the Mitchell Center to swim and make sure he stayed in shape for his final year with the Big Red Swim and Dive team.

Now that school is back in session, he will be spending 12 hours a week in the lab while balancing his other courses and 20 hours of swim practice per week.

Delahunty’s  work ethic in the classroom directly translates to his success in the pool. He explained that just like his research, achieving success in the pool is a process: “I am expected to show up to lab and get done what I need to get done. If I come into the lab and say, ‘I have to cure cancer today,’ I am never going to get anything accomplished. When you go down to the pool and say, ‘I have to win a national title today,’ it’s not going to do anything. The analogy I used was ‘baby steps.’”

After college, Delahunty plans to pursue a PhD in chemical biology. “I always wanted to go to medical school, but since starting my research with [Dr.] Fantini I have developed more of an interest in chemistry,” he said.

“The overall goal is to develop molecules that have a bunch of biological applications that are used in things like preliminary cancer research.”

He plans to continue this research in a private lab upon graduating his post-undergrad program.

Delahunty epitomizes what it means to be a Denison student athlete. He is a member of the Swim and Dive team that consistently vies for a national title, while conducting advanced laboratory research capable of being published in a professional chemistry journal. He embodies the Denison spirit of making academics the foremost focus of his college career while still managing to be successful in the sport he loves.