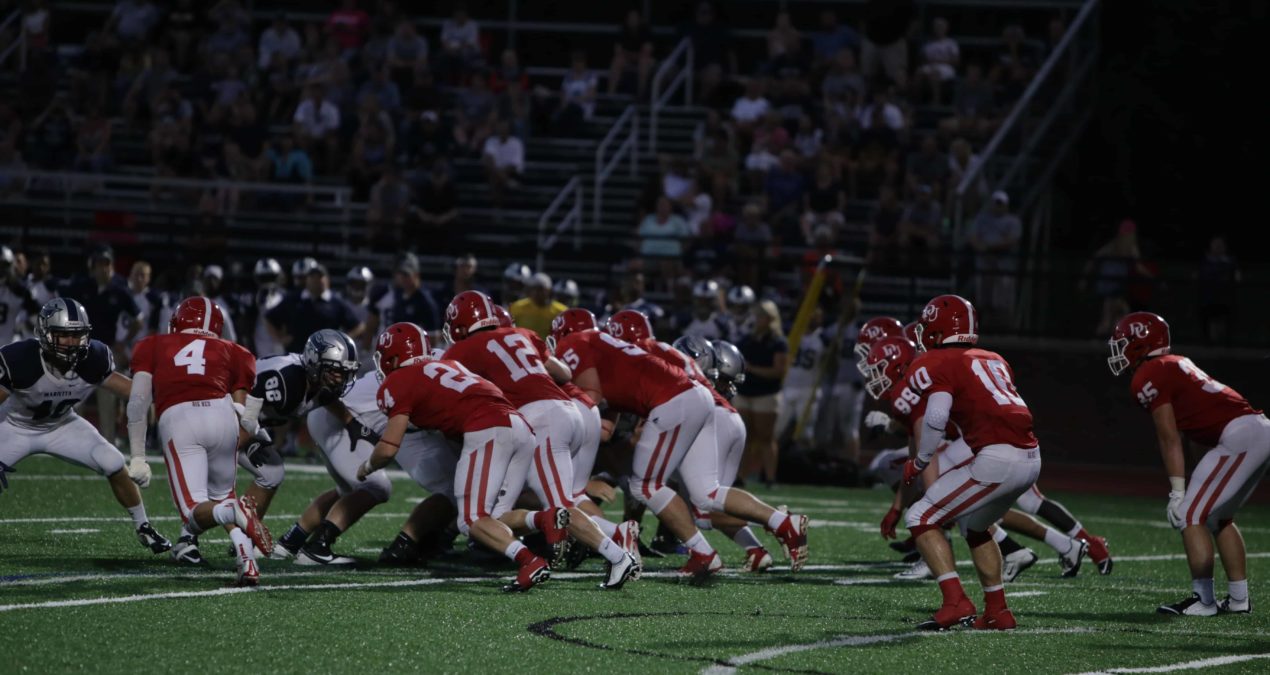 The new turf at Deeds Field was properly broken in on Saturday night as the Big Red football team played its home opener.  Under the lights, the new turf was not the only thing shining, with Denison winning 41-14 over Marietta.

Marietta received the opening kickoff and strung together a lengthy drive of 16 plays before Pioneer quarterback Lucas Havens threw an errant pass that ended up in the hands of Brice Winans ’18.

For Denison, quarterback Tommy Iammarino ’17 looked polished under center in his first career start. The junior admitted, “There were some nerves, [but also] a lot of preparation throughout the summer and throughout camp.”  Iammarino orchestrated an eight play, 80 yard drive that was capped off by a 22-yard pass to Dushawn Brown ’16 at the 4:20 mark of the first quarter.

It took until the second period for another scoring drive, this one from the visiting Pioneers.  Aside from an incomplete pass by Havens, every single play was a rush by Nick O’Neal.  The Marietta tailback scored 15 touchdowns last season and added his first of 2015 on that drive.

It was the same O’Neal who began Denison’s onslaught as the Marietta running back coughed up the ball at his own 25 yard line, a fumble that was recovered by Denison’s Alex Willingham ’16 on the Marietta 30.  A few plays later, Iammarino found running back Jordan Patterson ’16 on a pass play that put the Big Red up by a score. Jordan Patterson ’16 feints past a Marietta defender. He scored a receiving touchdown.

Denison’s next possession also ended in a score, with Iammarino passing to another senior, this time tight end Cam Layer ’16, for 22 yards and a score.  Most of the junior quarterback’s completions were to seniors.

“Our senior leadership has been key for us this season and it showed last night,” the quarterback said.

Just before halftime, kicker Conor Dunn ’17 added a field goal from 24 yards out and the Big Red were ahead 24-7 after two quarters.

With halftime in the rear view mirror and a big lead already on the scoreboard, the heat started to affect the Big Red.  Both Brown and Iammarino went down with leg cramps and did not return in the blowout.  “The heat was something we had to deal with throughout the night.  Just need to continue to hydrate so that doesn’t happen again,” Iammarino said.

Canaan Gebele ’19 entered the game in Iammarino’s place. Gebele who completed the final 59 yards of a 75-yard drive, concluding his first possession with a two-yard touchdown run.

“Crossing into the endzone never gets old, but doing it in a Big Red uniform was very special and something I’ll never forget,” Gebele told the Denisonian.

Near the end of the third quarter, Andrew Baird ’17 picked off a bad pass from Havens in Marietta territory and returned it 24 yards to the 13 yard line.  “I was kind of surprised that [the ball] got through to me,” the Shelby, Ohio native said., “It hit me right in the chest.”

Baird also had ten tackles, which was just another day at the office for the safety, who had a team-high 97 tackles last season. He took little personal credit, instead crediting “the work of the linemen and linebackers, who take on basically all the blockers to set up the tackles for us safeties.”

The offense could not take advantage of great field position, settling for a field goal on that possession.  But Gebele was not done, as the first-year ended his first college appearance on a high note, completing an eight play, 66 yard drive later in the fourth quarter with a two yard pass to C.J. Davis ’19.

An unsportsmanlike conduct penalty pushed the ensuing kickoff back to the 20- yard line and led to a squib kick.  The ball rolled through Joel Lohoua ’17’s legs and he had to chase after it.  Lohoua picked the ball up near the Marietta sideline and all 2,455 in attendance thought Lohoua had returned the kickoff for a touchdown.

Unfortunately for Lohoua, the referees called him out of bounds on the Denison sideline just nine yards short of the promised land.  With 95 seconds left in the game, all Denison had to do was run out the clock to earn a 41-14 victory.

Iammarino threw for 316 yards and three touchdowns, with 173 of those yards coming on seven connections with Brown, who is just 90 yards away from tying DU’s career receiving yards record.  By comparison, Marietta passed for 170 yards total.  Denison had just 84 rushing yards, but a lot of quick passes to running back Jordan Patterson ‘16 made up for the lack of ground success.  Marietta’s O’Neal carried the ball 29 times for 151 yards, but he could only carry the Pioneer offense so far.

Denison’s strong offense overshadowed a great defensive performance.  The defensive line was able to get a lot of pressure on Havens, who was never able to get into a rhythm.

The Big Red earned a big win over Marietta, but by no means was it a pretty win.  Denison capitalized on three Pioneer turnovers, scoring 17 points on those takeaways.  They also took advantage of an obscene number of penalties, 15 to be exact, that cost Marietta 146 total yards.  “It’s just something that takes time over the season to clean up,” said offensive lineman Drew Gray ‘17, “I feel like it’s expected for the first game of the season, where emotions are high after months of waiting.”

Denison was not much better, with nine penalties costing them 103 yards.  Some of these can be chalked up to early season jitters, but all of the stoppages from incomplete passes and flags took some energy away.

Denison will take this weekend off before resuming their season on Sept.19th.  The Big Red look to win their sixth consecutive game when the Oberlin Yeomen come to Granville for a 7:00 p.m. kickoff.

Uber Burger will open on Broadway