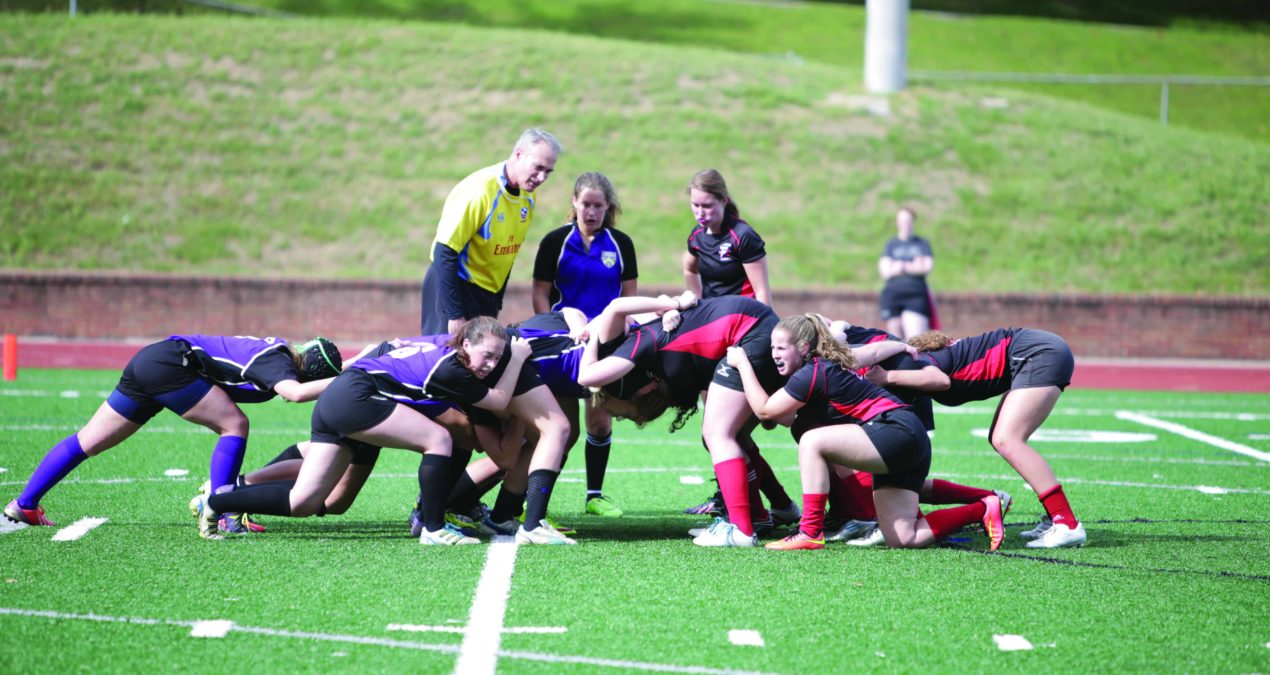 In Rugby, a ‘try’ is comparable to a touchdown in football, and the Big Red women tried hard and often, piling up points to a 50-0 win over the Kenyon Lords. Scoring two tries in the first three minutes, Denison ran away with the contest early. Hannah Roodhouse ‘16 led the team with three tries, followed by Jen Vo ’16 and Zoe Deprez ‘18 with two tries each. Abby Radnitzer ‘18 sprints with the ball down the left side of the field. Radnitzer finished with one try and a successful penalty kick in the win over Kenyon.

In a rivalry that transcends all sports, and in a sport where bad blood turns into real blood quickly, there is a surprisingly good relationship between the Lords and the Big Red on the rugby pitch. Honore Lachenauer ’17 is not used to the friendly atmosphere, especially when her team is so far ahead.

“The Kenyon girls are really friendly, on and off the field,” Lachenauer said. “I got pushed over and this girl just helped me up. I was like ‘OK, we’re destroying your team, but thanks!’ They still had great spirit, great sportsmanship.”

In the United Kingdom, when two foes get in a bar fight, it is common to see the victor help the loser up and enjoy a drink together later in the evening. That kind of respect shows between Denison and Kenyon’s Women’s Rugby. Some may find it odd, but it is just another great part about the rivalry for Alana Perez ‘16.

“The fun thing is, there’s a buddy buddy thing with Kenyon,” Perez said. “On the field you get aggressive, but as soon as the whistle is called, you go ‘hey, good game, how’s it going?’”

While it was a big success for the Big Red women to win their opening game in such convincing fashion, they are unsure as to what to expect for the rest of the season because of a restructuring of the league. In the past, women’s rugby was Denison’s only Division II sport, which allowed the women to compete against the likes of the Ohio State University and the University of Kentucky. A new scheme set by the Ohio Rugby League now places Denison in the NCAC Rugby conference, a league intended for them to play teams from similar sized schools. After qualifying for nationals three consecutive years, Denison is now what some consider a powerhouse in small-college rugby. “Before we were playing schools that were bigger and expected to be better than us, and we’ve always risen to the challenge,” Lachenauer said. “Now we’re in a position where we’re supposed to have been from the beginning.”

Similar to a child that played up in age division in a sport, the Big Red women now face competition in their own league, something which puts the pressure, and the target, back on them. The team can usually predict how far they will make it in regional and national play, but this year is different.

“In the past, we hope for the best, but we’re realistic,” Lachenauer said. “Now that we’re in a new league, we’re not sure. We’re going for the best, and hopefully we get it.”

Perez claims that great coaching and natural aggression play a big role in their success. “Most of the girls haven’t even played before coming to Denison, which speaks a lot to our coaches,” Perez said. “Rugby is a sport you can pick up, it just takes aggressiveness.”

That aggression has translated into some on the field rage, the most violent being a direct punch in the face delivered by a graduated teammate from last season. Needless to say, the Hiram team should be wary of their face and their record when Denison shows up this Saturday on their pitch in northern Ohio.