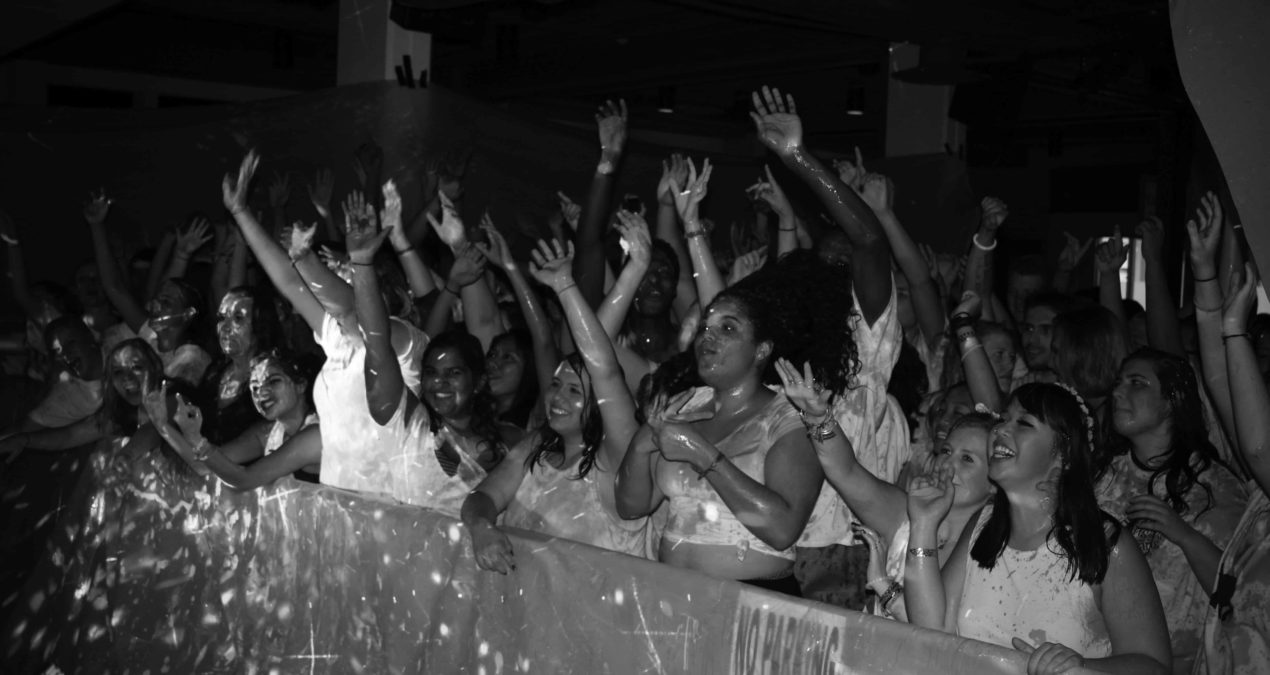 The moment that everyone had been waiting for had almost arrived. Even though it had been minutes since the last time students had been sprayed with paint, they were already yelling for more. The DJ at the front of the room held what appeared to be a large water gun, dripping with neon green paint, high above his head and yelled “Who’s ready to go hard in the paint?”

The crowd went wild, and soon they were all covered head to toe in the gooey paint, trying not to slip while jumping up and down to the blaring music.

Last Friday, Oct. 2, Dension hosted Paint U in Slayter Union. An event that combines the messy fun of the Color Run with the great dancing of a school mixer, Paint U is hosted by a company called GloRage, and is essentially a giant dance party, with the twist of getting drenched in paint every few minutes. Kariana Santos ‘16, Mackenzie Byrd ‘16 and Jed Dioguardi ‘18 pose after being drenched in paint.

The end result is neon-splattered clothes, paint soaked hair and a lot of fun.

When students walked into the event, they saw the majority of the third floor of Slayter had been transformed into a paint-spraying zone covered in plastic tarps.

The floor also seemed to be covered in some kind of paint because it was very slippery, and people were sliding around even before any paint was sprayed.

The DJ’s had numerous buckets of paint, and used both water gun like devices and what appeared to be giant Frisbees to cover the crowd with it.

Every few minutes, they would ask the crowd, “Who wants paint?”, turn up whatever song was playing and spray the loudest section of the crowd with pink, blue, green or yellow.

Although at the beginning the small crowd seemed a bit uneasy, having  no idea of what to expect, as more people arrived and  the crowd was slowly covered in paint, everyone started dancing and having a good time.

The majority of the feedback was very positive. Elizabeth Jaffy, ’19, said she liked the event because it was “really different, I’ve never been to anything like it before, but I had a lot of fun with my friends.”

However, others thought that the paint was a little too much. Ja’lia Sheppard ’19, said that her favorite part of the night was “the music, but the paint was not okay.”

Joel Lohoua, ’17, a student coordinator for the event, said that his favorite part of organizing the event was “seeing everything come together and everyone having a good time.”

Paint U was a messy event to say the least, but it was very well attended and brought people together with shared gooey fun.