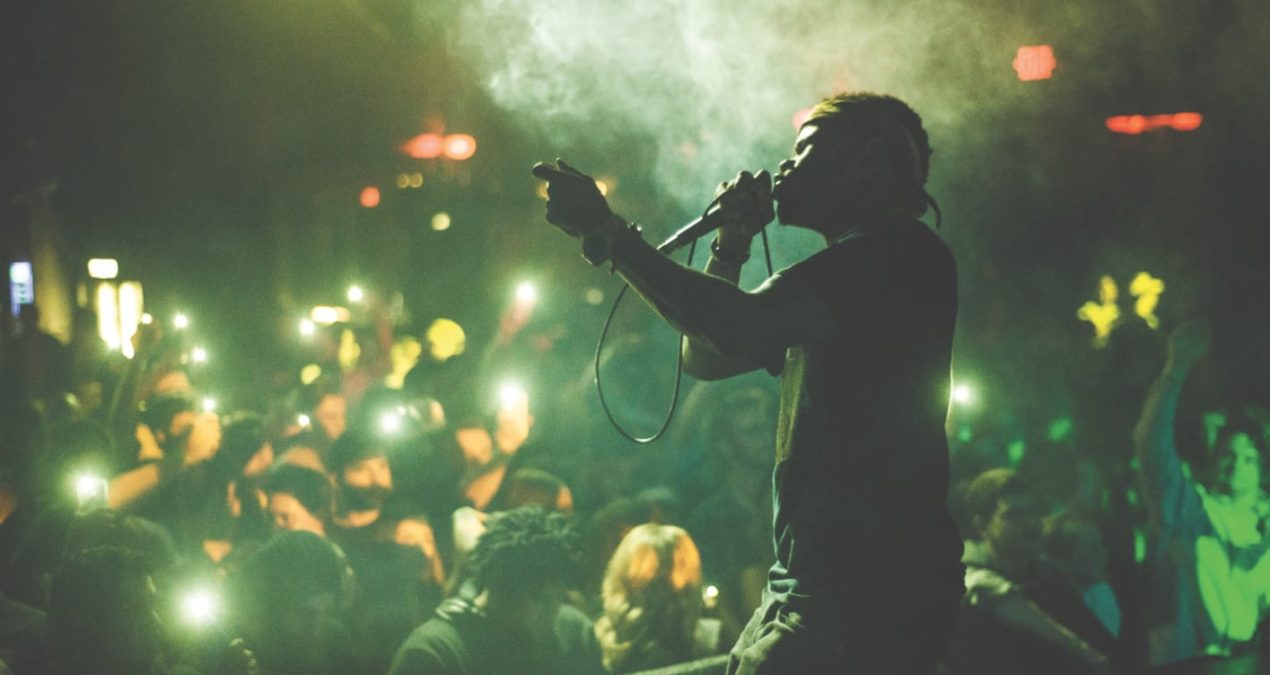 With so much progress, Joey Aich has made quite a name for himself among up and coming rappers. So much so that last Thursday, Holbert opened up for the man who influenced his music the most since he was 15 years old: Asher Roth.

I walked into Park Street Saloon right when Holbert was getting on stage. He sold the most tickets out of the few artists selected to open, ensuring him a spot to perform before Asher went on stage.

I landed front row and immediately felt the energy surge through the crowd; the kid who once needed to wear headphones to be able to perform had completely disappeared, replaced with a man who absolutely belonged onstage.

Exuding confidence, he got the whole crowd moving, waving their hands and shouting his name. At the end of his set, during which he stayed true to his humble mission and brought Tre Smith, a Cleveland DJ, Kyle Messner, a Cleveland MC and sarob., a fellow Denisonian and rapper out of Dayton, all onstage with him, the crowd screamed for more. Luckily, more is exactly what they got—Asher Roth brought Holbert back up onstage to perform with him. A couple songs and stage dives later, everyone knew who Joey Aich was. Joey Aich, over the past few years, has created a network of other Cleveland hopefuls and fans across the nation. Over this past summer, he performed at various locales all over Ohio. Unlike many rappers, Joey Aich, otherwise known as Joseph Holbert ‘16, started focusing on building up other rappers from Cleveland and other parts of Ohio, making sure that his successes would mean success for them as well. He wanted to spread the message that there is plenty of space in the rap game for everyone and that rappers should lift each other up rather than put one another down. This message resonated with many artists from Cleveland, including King Chip, whom Holbert was able to rap a few bars for after a concert.

In 2012, Holbert came to Denison University from Cleveland to play baseball. For the past few years, he had also picked up a hobby of rapping—never taking it on 100 percent because of baseball, but always keeping it on the back burner. Soon after arriving at Denison, however, something in him changed. He grew inundated with the thought of performing onstage. Everything he did revolved around proving to everyone around him that he could make it as more than just a Division III athlete. Joe made the bold decision to not play the sport he used to prioritize, but instead cultivate his rapping talent, looking toward idols such as King Chip (also known as Chip Tha Ripper) and Asher Roth as inspiration.

This musical journey began in the spring of 2013 when Joey Aich performed at the Bandersnatch for open mic night. Not quite comfortable with an audience like the one at Denison, he wore headphones and played his raps so that he would not forget the lyrics.

Holbert’s humility, motivation and charisma will undoubtedly land him among the greats. Soon, there is going to be another 15-year-old kid who wants to rap, and there is no doubt in my mind that it will be Joey Aich who inspires him to follow his dreams, just as Asher Roth did for him.