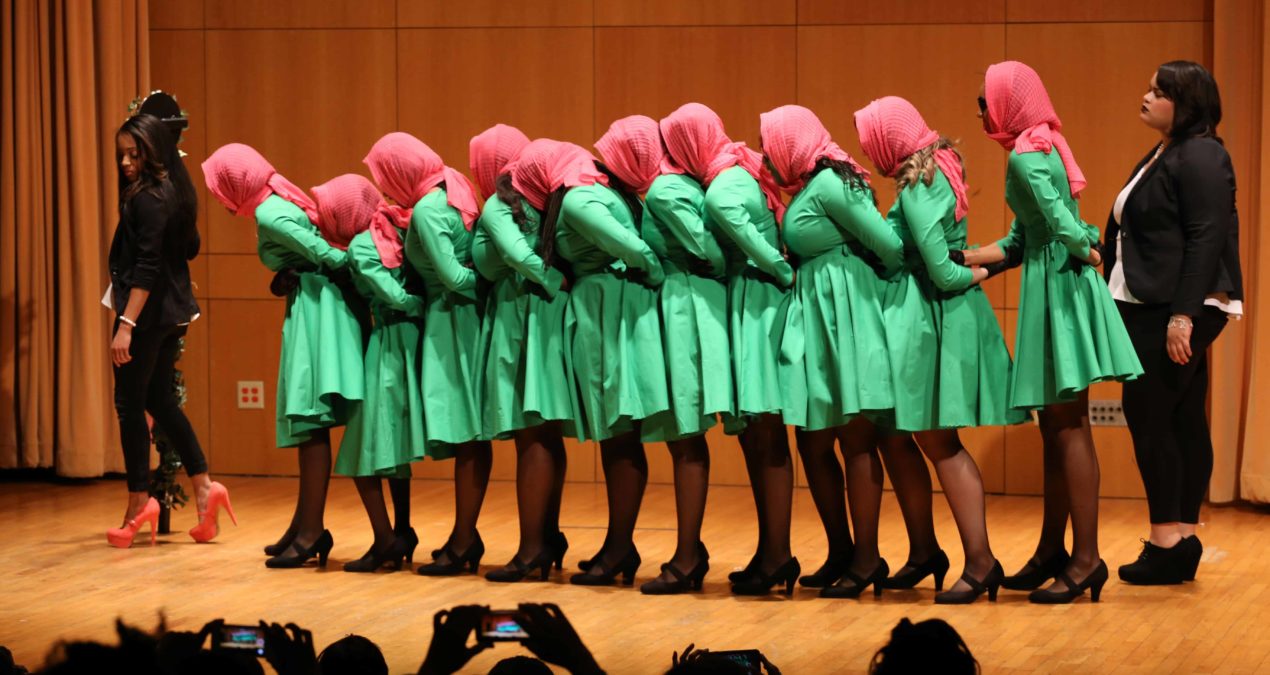 The AKAs are back! Ten new women of Alpha Kappa Alpha Sorority, Incorporated kicked off their probate last Sunday with the new ladies entering from stage left, arms locked, donning green dresses paired with sunglasses, a pink headdress and a strand of pearls.

The Columbus city-wide Pi Gamma chapter presented the new members at Capital University at 7:08 p.m. Huntington Hall was crowded with excited members of AKA, other members of NPHC sororities and fraternities and their supportive families and friends.

“I just feel really blessed to be a part of an organization with my wonderful line sisters,” Brooks said. “I believe in the purpose of AKA, empowering Black women to unite and support each other and uplift our community by organizing community service in our communities. I am so grateful for the trailblazers that have come before us and excited to work with others with a common purpose.”

In “Alpha Kappa Alpha to return to campus,” The Denisonian reported on Sept. 16, 2014 that “‘participation in Alpha Kappa Alpha was basically shut down’ because of a hazing incident that took place in May 2012 involving members from Denison and Otterbein University in Westerville,” according to Nancy Gibson, a senior associate director of admissions and AKA member.

It is unknown what the specifics of the hazing entailed.

After three years since Denison students were initiated into Alpha Kappa Alpha, the University looks forward to its return.

“I am ecstatic that Pi Gamma is back at Denison. I have been excited for this day since 2012 [and I] am glad the day is finally here where we have active women of Alpha Kappa Alpha Sorority, Incorporated Pi Gamma Chapter at Denison,” said Aimee Maczko, the associate director of CLIC. “Our current NPHC member groups at Denison are excited to bring them into the fold to strengthen the Council.”

Shive added that “there was a lot of hard work and dedication that went into the show, and we were very excited to share our performance and talents with everyone. Beyond that, Alpha Kappa Alpha Sorority, Incorporated was founded to first and foremost provide service to all mankind, and we are excited to plunge into this work.”

The probate concluded with an unveiling of the new members and their line names. After, the ladies strolled together publicly for the first time. Attendees were soon allowed to embrace and congratulate the new members.

“I am so excited to be a member of Alpha Kappa Alpha Sorority, Inc. and I cannot wait to continue the service to all mankind that is instilled in this organization back to Denison’s campus,” Gibson said.

“The return of this organization provides additional service projects and educational programming to Denison and the surrounding community,” Mackzo continued. “I believe their return and growth of NPHC and the anticipated additions to the Multicultural Greek Council (MGC) will continue to spark interest in membership for all of Fraternity and Sorority Life at Denison.”