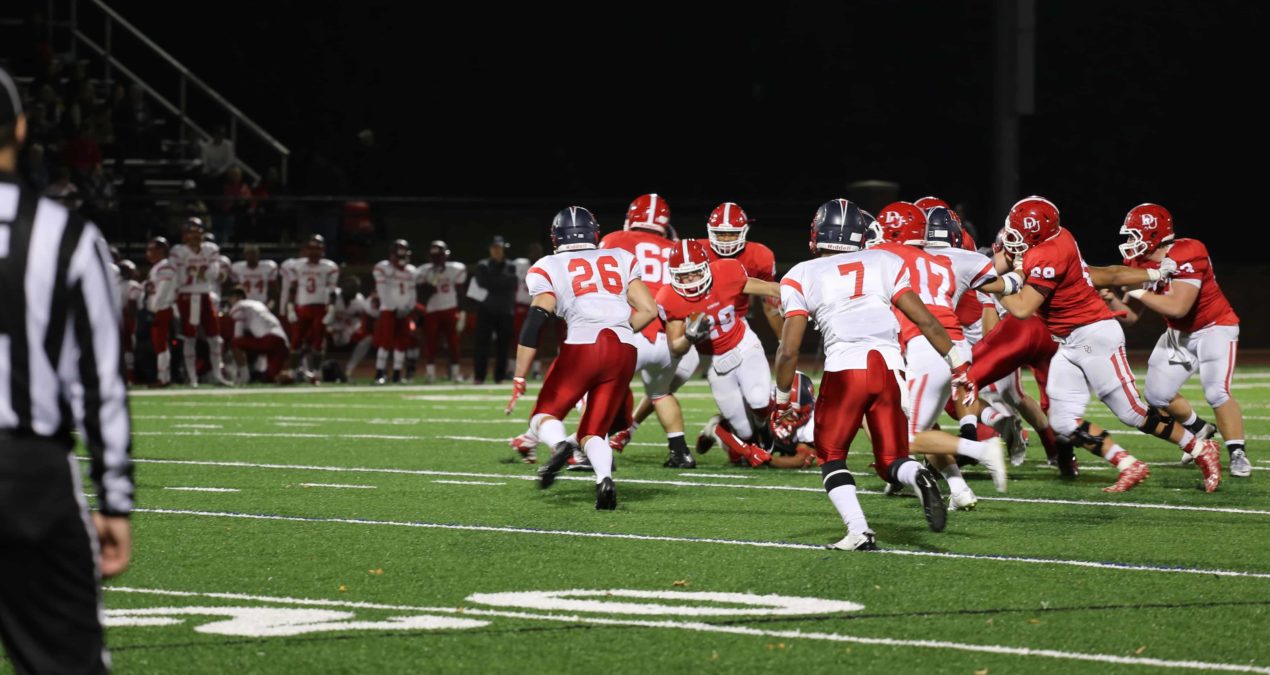 Someone had to lose.

A 42-yard field goal from DePauw’s Marko Adams with 2.6 seconds left gave the Tigers a 31-29 victory over the Big Red. The teams were evenly matched in a back-and-forth contest that disappointed many of the 2,050 fans in attendance. It was a tough loss for Denison to swallow, but the game was intense throughout.

DePauw scored on their first possession, driving 70 yards downfield in just 93 seconds. Denison’s first score came with 10:29 left in the first quarter on a safety. A David Weimar ’19 punt was downed at the one yard line and DePauw could not make it back to the line of scrimmage. “They came out and caught us off guard,” defensive back Joel Lohoua ’17 said, “and we responded on the next drive. It was a great job by the defensive line and the linebackers by penetrating.”

After the free kick, Denison took a 9-7 lead on the ensuing play, a 53-yard touchdown pass from Canaan Gebele ’19 to Dushawn Brown ’16.

The Denison lead would not last long, however, as Adams hit two field goals for DePauw, that put DePauw ahead 13-9 at the end of the first quarter.

The 13-9 score would hold until 32 seconds left in the second quarter, when Gebele ran in for a score. Denison led 16-13 at halftime, but fell behind after DePauw got their own safety and added a touchdown, albeit with a failed PAT, to make it a 21-16 game.

Denison answered toward the end of the quarter after a 64-yard pass to tailback Jordan Patterson ’16 set up a 31-yard make from kicker Conor Dunn ’17.

DePauw added another touchdown at the end of the third quarter and Denison trailed 28-19 to enter the fourth. After a seven yard rushing touchdown from Gebele brought the Big Red to within two, DePauw went three and out on their next drive. That gave Denison one final opportunity to take the lead.

Gebele led Denison downfield 74 yards and Dunn split the uprights with 1:35 on the clock to put Denison ahead 29-28.

But the Cinderella season from Denison was not meant to be. DePauw drove 56 yards on their next drive, using up nearly every second left on the clock before Adams hit the game-winner. DePauw left Granville the victors, 31-29.

With Ohio State on a bye week and both teams entering this game with 6-1 records, there was plenty of hype to go around. A cameraman from Columbus’ CBS affiliate, WBNS-TV, was on the sidelines for a time capturing game footage. “The crowd was extremely loud and engaged throughout, which really motivated the players,” wide out Richard Wehman III ’17 said. “The atmosphere was electric.”

Next week, the Big Red will travel to Crawfordsville, Ind., to take on the oxymoronic Wabash Little Giants. It will be an even tougher matchup than this week as Wabash is 8-0 and has not allowed more than 18 points in a game this season. “Next week’s game is a big one in terms of keeping our playoff hopes alive,” right tackle Drew Gray ‘17 said. “We need to put this week behind us and get ready for the Little Giants.”

Kickoff is set for Saturday at Wabash.