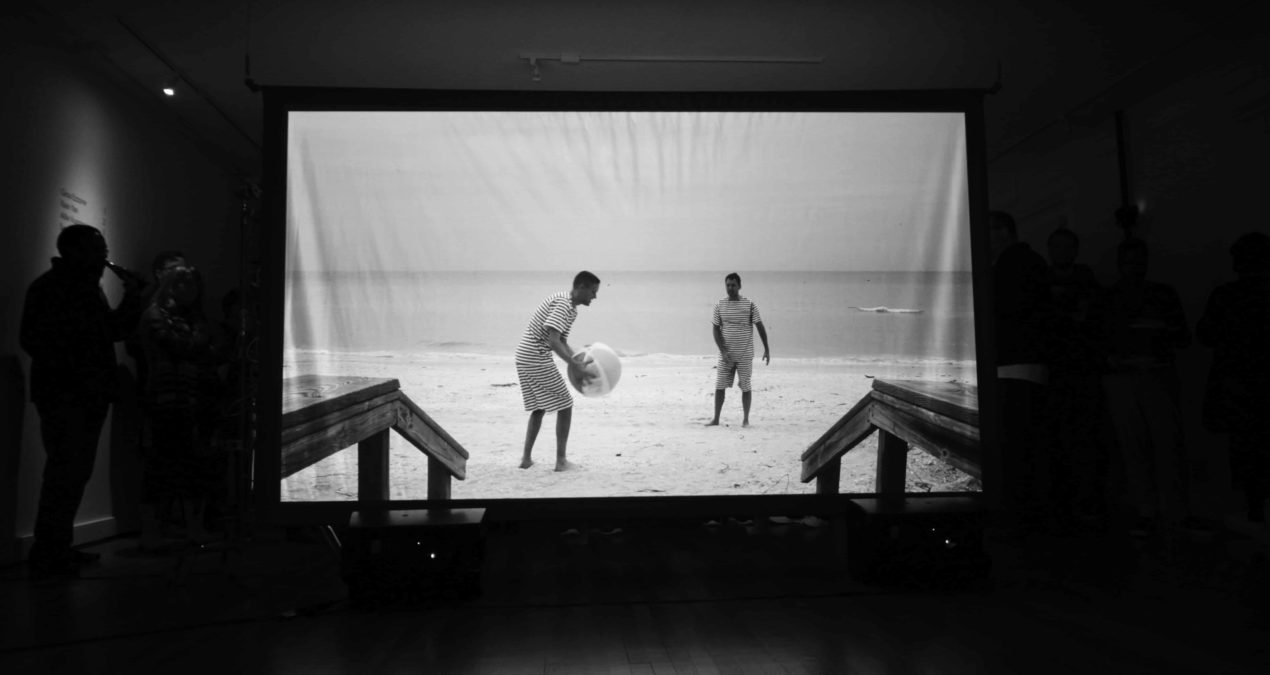 Buzz…there’s a woman submerged in water swimming towards the camera in a slow ethereal stroke. Buzz…another lift into a scene of two men playing catch on a beach in 1940’s swim attire. Sandwiched between two projected screens of a 19th Century freight elevator was HOIST, the cinema department’s semester installation exhibit created through the inspiration of visiting professor Liz Roberts.

The theme was simple, but effective. Each floor of the makeshift elevator represented a different artist’s short silent film. The viewer would press an elevator floor button, a la Twilight Zone, and the elevator would move upwards or downwards and then open its cage to display the scene. The scenes stood alone, unaffected by sequence or plot. It was up to the artist’s discretion on whether the subject should be aware of the audience in the elevator or leave them to act solely as observers of the scene’s experience.

Senior cinema major Shannon Laws ‘16 was proud to be part of HOIST. “With Cinema, you have so much artistic liberty and for the most part the only parameter you’re faced with is a time constraint,” she said.

“For HOIST, in order to create the illusion of the elevator, we were given a specific framework of which to work in. It was so fantastic seeing all the different ideas we came up with despite having the same set of guidelines.”

This isn’t Roberts’ first attempt at an installation in this style; HOIST is actually a part of her larger work entitled “Transportation.” Her theory is that transport is used to advance a narrative in cinema, and that the disbelief that is required to believe a movie is also necessary when someone steps into an elevator suspended only by a cable.

Roberts has been an visiting professor since last year. “the students exceeded all my expectations for participation, commitment and creativity…HOIST was a beautiful group with wonderful results,” she said.

While the scenes themselves did not meld together into a complete narrative, there were some themes that seemed to carry through the work. Concepts like spirituality, personal relationships and other-worldliness echoed through many of the scenes, like Tian Tang ‘16’s piece on the 16th floor. Her scene featured Allie Vugrincic ‘17 seated at a meditation altar surrounded by cards.

Vugrincic proceeded to light the cards on fire, perhaps signifying a spiritual balance as well as using light as an additional artistic medium in the piece.

While the elevator floor button panel was lit to show whose work was on each floor, those in the know may have had the opportunity to see Cinema Professor Marc Wiskemann’s personal piece of a mountain escape timelapse, hidden and unlit on floor nine. Gina Ezzone ‘15, who works as the Departmental Liaison and Program Coordinator for the Cinema Department also had her work in the exhibit.

HOIST was as ambitious as it was successful, with a large turnout on opening night. The interactive nature of the exhibit gave it a certain flair often absent in standard art installations. From featuring alumni, current cinema students and faculty the show mixed talent from all aspects of the cinema department.

Photo Courtesy of the Department of Cinema