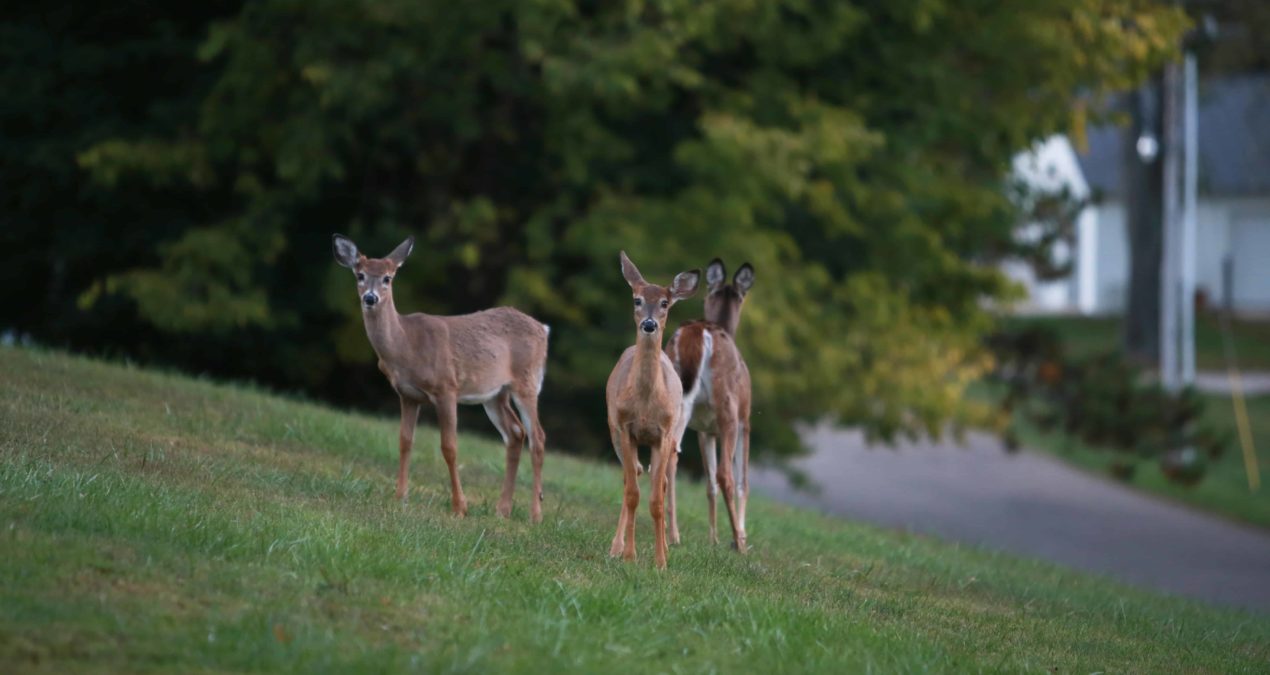 GRANVILLE, Ohio. The morning air is crisp. A pink sunrise hovers over Denison’s campus. A family of four deer stand grazing outside Swasey chapel. One lifts its head when a car comes barreling up President’s drive. Students trudge down the stairs to South Quad. Unconcerned, the deer continue to graze.

Trouble for the deer on Denison’s campus does not lie with the traffic flying down the road, natural predators like bears or the students walking around the grazing deer families.

Instead, trouble comes in the even colder winter mornings over Christmas break when experienced and determined archers wait for a deer to wander into range.

For the past three years, archers arrive every year during Christmas break to participate in the Granville Deer Management program to curb the troublesome deer population within Granville’s limits.

According to the Ohio Department of Wildlife, in Ohio during the 1970s, deer were relatively rare after being hunted to a bare 17,000. In  the next 40 years, a strategy for zone based harvesting was carried out, effective game law enforcement implemented and grazing land improved. The population boomed to its current estimate of 700,000.

Though an improvement on a once frighteningly small number, a high population comes with its own caveats.

According to the National Wildlife Federation, deer occupy the top tier in a food web once dominated by big game predators like bears and wolves. This lack of predation has allowed the deer population to grow in an unsustainable manner and subsequently throw the food web into whack.

The more deer there are, the more resources they consume, and the higher the likelihood that malnutrition and disease will spread as a result.

With cityscapes and urban development encroaching on lands once solely occupied by field and forest, wildlife are forced to adapt to and interact with human spaces.

With this greater interaction comes damage and health risks.

State Farm Insurance Company reports, from July 1, 2011 to June 30, 2012, there were an estimated 1.23 million deer-vehicle collisions in the U.S., costing more than $4 billion in vehicle damage.

Mollie Prasher, the Granville Clerk of Council, affectionately referred to as the “deer slayer,” was tasked with researching an initiative to deal with the high number of deer in Granville.

There was a time in the East Side of Granville that walking out and seeing 50 deer to the left and right was common. In 2006, an infrared flyover by Ohio Department of Transportation showed 100 deer per square mile in Granville township. This meant more than 700 deer within the village limit.

Since the inception of the program, hunters now see herds of eight to ten rather than the once common 40-50.

Upon discovering the low safety risks of bow hunting, Granville’s deer management program began in 2007, after 10 years of council meetings and frequent back and forth between the Ohio Department of Natural Resources.

Hunters must go through a rigorous process to hunt in the township limits. Applicants must secure all necessary licenses from the state, complete a hunter’s safety program, submit a resume of urban hunting experience, pass a bow proficiency test and provide a copy of a state or federal background check.

Though inconspicuous to Granvillians and Denisonians, Granville’s deer management program is apparently well known in the nation’s community of bow hunters. The notoriety keeps the applications rolling in to Mollie’s office from hunters all over the country.

“I  have  seven hunters that are firemen from New Hampshire,” Mollie, 57, says, smiling, proud of the hard work she has put into the program. “I’ve had them from New York, Tennessee, Pennsylvania and Alabama.”

The program also boasts both the winner and second place finisher of the International Archery Competition.

“These are not the bubbas that people think of initially when they think of hunting,” Mollie says. “These men and women are serious about what they do.”

When one arrow can cost $20 and up, caution and surety is preferable.

According to Mollie Prasher, the program has the range of about 1100 acres of land broken up into 40+ zones for the hunters to use.  Zones do not have to be a single property, but several neighbors cooperating together.

Additionally, there is property in downtown Granville that hunters have permission to traverse, as close as one block away from the Granville Clerk of Council’s office on Broadway Road.

Denison has collaborated with the Granville effort and provided several hunting spaces in addition to the township’s own. Archers hunt north of the Homestead, behind the football field and even right up to the front of Swasey Chapel the week between Christmas and New Years.

Though Denison does not hide their collaboration with the deer management program, little-to-no students are aware of it.

Olivia Geho ‘16, says of the deer management program, “Deer are just giant rats with hooves. I am totally okay with them hunting on campus over Christmas.” Once she was informed that the meat from the deer goes to food pantries, she was even more pro-hunting on campus.

According to Art Chonko and Mark Comisford, director of Facility Services and supervisor of ground/roads respectively, there really is not much to be done to keep the deer off of Denison’s campus other than using deer resistant plants and participating in Granville’s culling program.

The program, which is so inconspicuous and smoothly operated that, to students and faculty on campus it might as well not exist.

While first year students might be enamored by the deer, seniors view them as another part of the landscape on campus, though students have varied reactions to their presence.

Spring semester of her junior year, Jen Kristal ‘16, was coming back from the Bryant Art building late at night in the middle of a Denison winter, when she came face-to-face with a large and peaceful buck.

“It was very interesting and sobering to gaze into the eyes of the animal and just be there,” she said of the experience.

Ava McNicholas ‘16, told a rival tale of being chased while walking down to south quad by one of the deer.

“It was dark, and all of a sudden a deer started galloping towards me,” McNicholas  says. “I didn’t know what to do in this situation. If a bear comes after you, you’re supposed to play dead. But if a deer does, what do you do?”