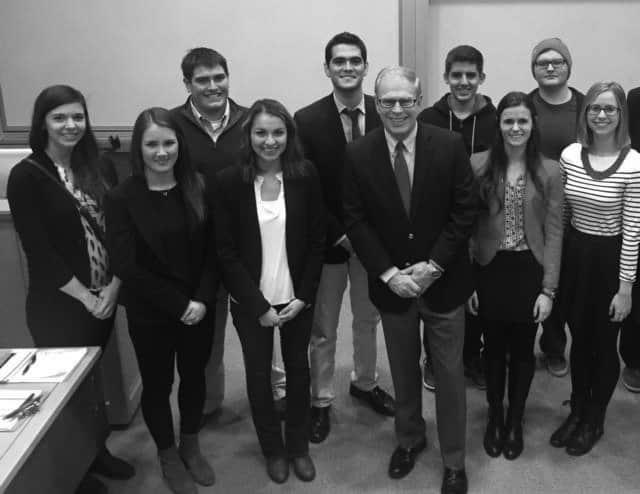 The Denison Democrats hosted a lively forum with former governor of Ohio, Ted Strickland, who is now a candidate for the United States Senate. Denison community members were offered the chance to hear the candidate state his position on key issues that may influence the youth vote in the upcoming election.

The event, held in Burton Morgan Lecture Hall, consisted of a short speech and a question and answer segment with the audience.

Governor Strickland began his speech by discussing a wide range of topics including women’s issues, his early life and its influence on his political career. Finally, he discussed his opinions on the state of the Ohio economy.

Opening remarks centered on commemorating the decision and its recent 43rd anniversary. He reiterated his support for women’s issues and then pivoted to how his background helped mold his political life.

Governor Strickland spoke of his developmental years, as he was the eighth child in his family of nine. Strickland credited his education as being a large influence in his life.  The former governor has numerous degrees, the highest being a Doctorate in Counseling Psychology.

Governor Strickland stated that “I’ve never forgotten where I’ve come from,” and he said that, despite Senator Rob Portman’s large monetary advantage in the U.S. Senate race, “I’ve not spent a dollar on paid media.”

After the conclusion of the speech, Strickland fielded questions on a diverse group of related to foreign policy, energy, and his Democratic primary opponent P.G. Sittenfeld.

The event was not without a small flaw, however. Before Strickland’s arrival, the Strickland Campaign team and the Denison Democrats identified two individuals who were attempting to tape the event and security was called.

Vice President of the Denison Democrats, Katie Elia ‘18,explained, that “We had two trackers from the opposing campaign try to come and videotape him, just so that they could try to get some sort of recording of him saying something that they could potentially use against him, and so they had to be asked to leave.”

“I feel he was received very well because he was so opened to answering everyone’s questions… he was very personable talking to students after,” said Angie Phifer ‘18, outreach coordinator of the Denison Democrats.

Phifer stressed that moving forward, the Denison Democrats are concentrating on expanding their engagement with the campus,“our main focus recently is on voter registration. We will be doing a lot more events on campus trying to get people registered here in Ohio to make a real difference in the vote whether it’s in local elections, senate or presidential elections,” she said.

In the past, the Denison Democrats have hosted community candidates for local elections, as well as debate viewing parties in Slayter Union.