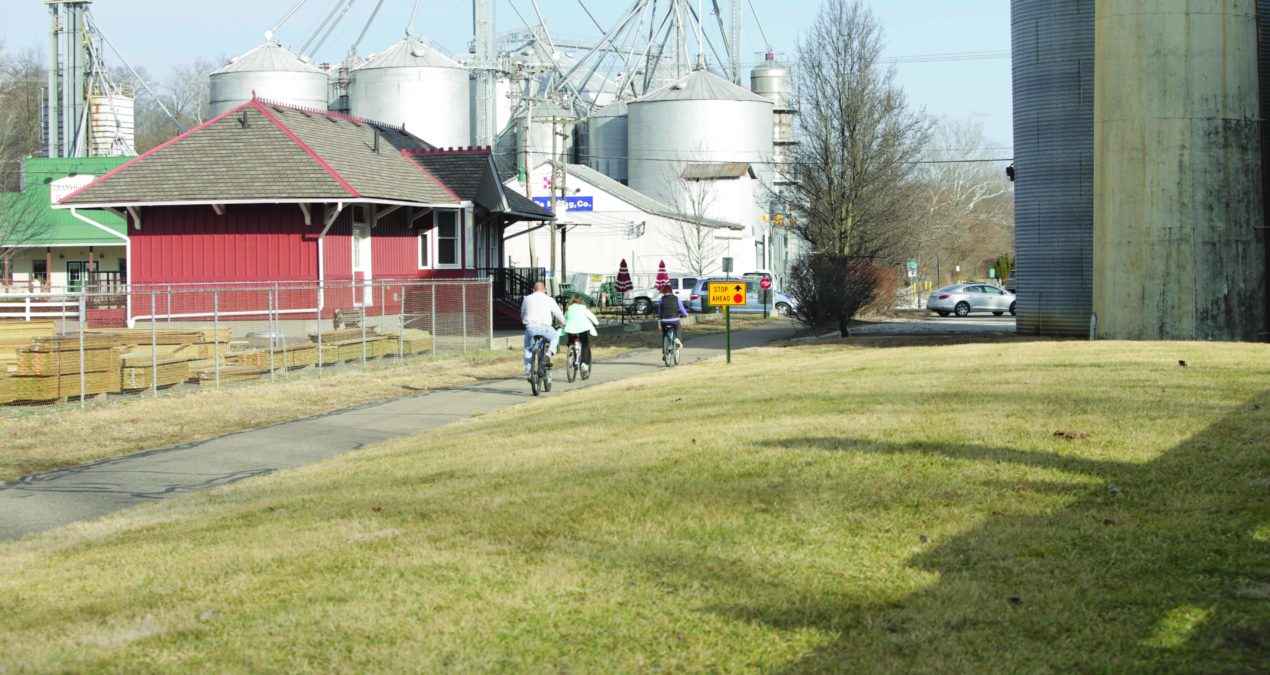 It has been two years since Denison’s coal furnace stopped producing the white clouds drifting out of the yellow smoke stack in downtown Granville. Today, significantly cleaner natural gas burners leave the tower obsolete.  Nonetheless, the Denison heating facility in Granville still pumps steam up the hill through underground pipes that carry heat to about 70% of Denison’s buildings.

For the better part of 7 decades, the facility burned coal to heat the campus. Depending on the winter, this could mean anywhere between 3,500-5,000 tons of coal annually. Today, the heat comes from burning natural gas, which is now cheaper than coal with the expansion of fracking practices in the northeast.

Prior to the creation of the plant, a boiler in the now defunct Cleveland Hall (the current site of Bryant Arts Center) was the central source of heat for the campus.

In the 1940’s coal was inexpensive and readily available on the railroad that ran through Granville, so placing it off-campus was a sensible location for the plant. The rail line is now a bike path, making the plant’s location less-than-ideal as some of the heat energy of the steam is lost in the long trip up the hill.

In 2006, the EPA upped their standards for coal emissions, requiring plants to remove toxins like mercury and sulfur oxides before releasing the byproducts of burning coal. This required doubling the size of the plant by adding a “Baghouse” to the back of the plant that extended the filtration process. The facility burned coal for only 8 years after this expansion.

Ken Wiegand is the Chief Engineer for facilities services at Denison. He says the multi-million dollar expansion of the coal scrubbers in 2006 was a move they wouldn’t have made had they knew what fracking would do for the price of natural gas.

“If we had a crystal ball we wouldn’t have made the expansion,” Weigland said. “But at the time coal was getting cheaper and the price of natural gas looked like it was continuing to increase.”

Two years ago, the EPA further increased their standards on coal power plants. Denison would once again have to re-vamp their filtration system to keep complying with regulations. Testing emissions alone would cost $40,000, vastly outweighing the $200,000/year savings that would come with the switch to natural gas – not even to mention the millions of dollars it would cost to upgrade the facility.

Jeremy King, the Sustainability Director for Denison says that beyond financial, there are environmental benefits for the switch. “Natural gas is a much cleaner burning fuel so we have fewer greenhouse gases and other pollutants such as sulfur oxide and nitric oxide.  In addition, coal in Ohio is generally from strip mines which has significant environmental impacts.”

Natural gas burns up almost entirely as well, so there are fewer greenhouse gases emissions. In any given year, the switch saves Denison about 10 million pounds of CO2 emissions, reducing the college’s immediate carbon footprint by 15-20%.

Another option to further reduce the net carbon cost of producing heat is using the old coal furnace to wood pellets. Biomass is a source of renewable energy, and test-runs have been successful at the plant. As of right now, however, the dollar cost is about 1.5 times higher than burning natural gas – a figure that Ken Wiegand says is financially prohibitive, though the practice is more environmentally friendly than fossil fuels.

King points out that burning fossil fuels of any kind is problematic for carbon neutrality. “We have a carbon neutral goal by 2030 and for us to get there, we’re going to have to figure out viable strategy for heating campus that is carbon light.” Even with this strict deadline, the replacement of coal to natural gas is a big stride in reducing Denison’s carbon footprint.