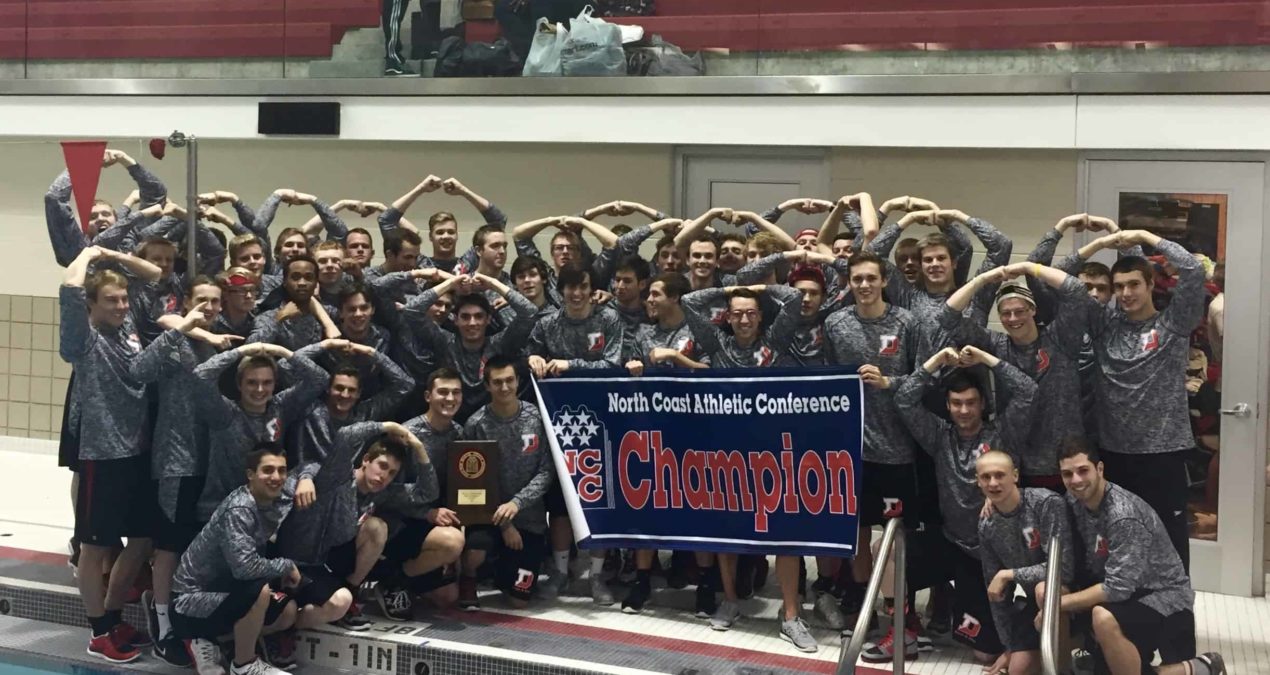 With a final score of 1,942.5 points, the Denison men’s swim team triumphed over Kenyon College to win the North Coast Athletic Conference Championship swim meet ending on Feb. 13.
“It’s a nice accomplishment for the men,” said Head Coach Gregg Parini. “We’d seen Kenyon a couple of times earlier in the season and the meets really weren’t competitive. Their men manhandled ours in both the relay and dual meets this fall and sent us on our way.”
Previous 2015-2016 scores for the men’s team against Kenyon are 124-116 (Kenyon) and 196-104 (Kenyon).
Kenyon took second place in the conference with a score of 1,714.5 points, followed by DePauw University with a score of 1,113 to round out the top three positions. Denison, Kenyon and DePauw were the only three schools to score more than 1,000 points.
The men’s team also won a clean sweep of awards, with Mitch Williams ’19 winning the Newcomer of the Year Award and Jack Lindell ’17 winning Swimmer of the Year. Parini was also awarded Coach of the Year for the NCAC. Diver Max Levy ’17 was awarded Diver of the Year and coach Russ Bertram won Dive Coach of the Year.
Parini won Swim Coach of the Year. “The award really is an award that should go to our entire staff,” Parini said. “Our success is a group effort and we have a great group of coaches and staff members who work with our student-athletes on a daily basis.”
Lindell was a 2015 All-American swimmer in the 200 yard backstroke, 400 yard individual medley and the 400 yard medley relay as well as a 2015 NCAA Division III national qualifier. He also broke the pool and conference record in the 200 yard IM with a time of 1:49.21.
“I am extremely honored and humbled to have been named the NCAC Male swimmer of the year.” Lindell said.
Though the award was for individual performance, Lindell credits his teammates for the Big Red’s success at NCAC’s. “I couldn’t have done it without the guys on the team who pushed me every day during practices and made sure I was staying focused. I may have been scoring some of the points but every single person had an input into the performance of the team as a whole this past weekend.”
Williams took second place in the 200 yard butterfly at the NCAC meet and has a personal best time of 1:49.87 in the event.
“I am extremely humbled to be named the NCAC Newcomer of the Year. I wouldn’t have wanted to swim for any other team or with any other group of guys. Now we look forward towards nationals,” Williams said.
“We’ve come a long way this season and I’m pleased with our progress,” Parini said. “That said, we also have a lot of work to do before NCAA’s. We’ll need to raise our game much higher over the next four weeks if we want to be competitive nationally.”
Several of the men have qualified for the NCAA National competition. Selection of those qualifiers will happen this week.