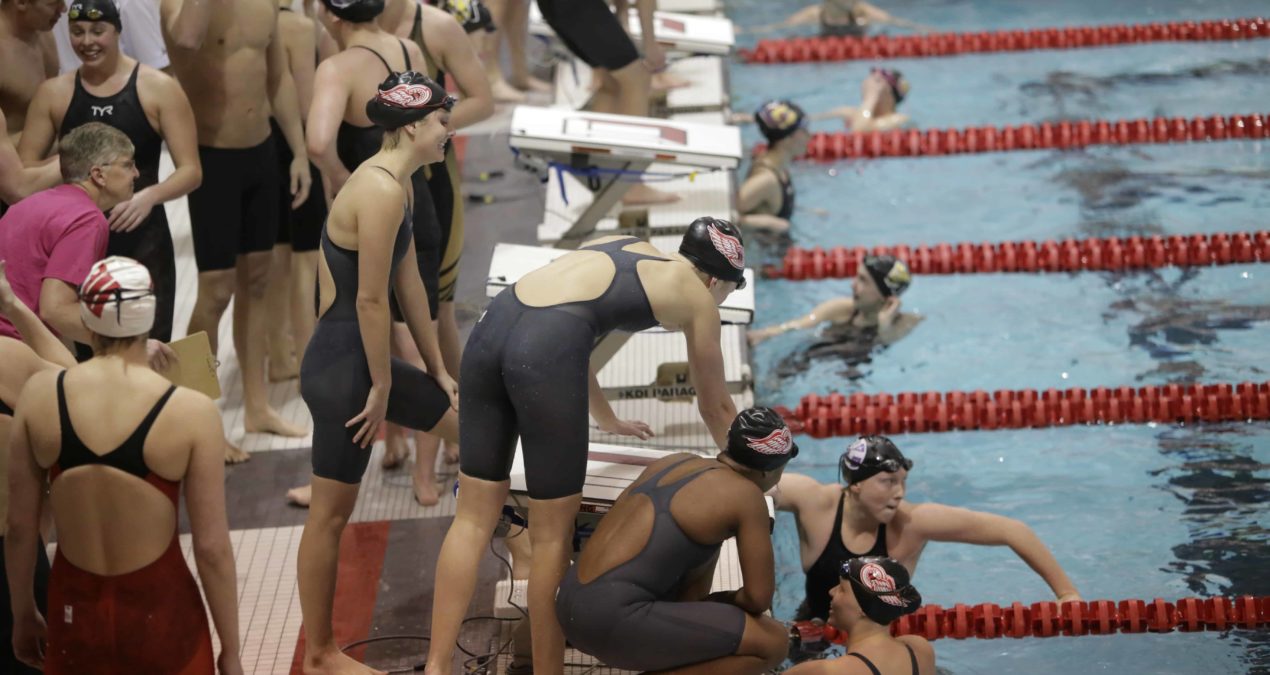 The Denison women’s swim and dive team finished second in the much-anticipated NCAC Swimming and Diving championships on February 10-14. The conference meet was hosted at the Trumbull Aquatics Center, which was filled for the entirety of the weekend.
Per tradition, the meet turned into a showdown between the Denison Big Red and the Kenyon Ladies. For the first time in seven years, the purple banners were flying as the Kenyon women’s team triumphed to victory with a final score of 1957.5 to 1787.5 over the Big Red.
Getting the meet off to a fast start, the women’s 200-yard freestyle relay, comprised of Carolyn Kane ‘17, Ashley Yearwood ‘16, Kate Wright ‘16, and Mary Van Leuven ‘16, finished first with a time of 1:32.41.
Undoubtedly the most exciting events of the meet, the Denison women won four out of the five relays of the weekend – the 200 freestyle, the 400 freestyle, and 200 individual medley and the 400 medley. The Big Red took second to Kenyon in the 800 freestyle relay.
Kane was a part of all four winning relays during the conference meet and also took first in the 100-yard butterfly.
“The feeling of winning is irreplaceable. These girls and I train side by side everyday and it’s great to see our hard work pay off and know that we accomplished our goals together,” Kane said.  “It’s all about being aggressive and getting our hand to the wall first and that’s exactly what we did.”
Standout performances came from Yearwood as she touched first in the 100-yard backstroke with a time of 56.48, as well as contributing to all four winning relays alongside Kane.
This year’s event was extra special for Yearwood as she was able to share her final conference meet with her parents for the first time since she began swimming at Denison.  As an international student from Bermuda, Ashley’s parents who are usually watching from home were able to return to hill for the first time in four years to watch their daughter’s final conference meet from the stands.
A stacked 500 freestyle for the Big Red on Saturday resulted in third, sixth and eighth place finishes from Campell Costley ’17, Taylor Johns ’16 and Alex Elizeus ’17.
Saturday wound down with second, third and fifth place finishes in the 200 breaststroke from Marissa Bednarek ’16, Marisa Pulaski ’18, and Ellen Higdon ’18.
The final win for the Big Red women came from Halli Garza ‘18 in the 200 butterfly with a time of 2:02.40, a time that will secure her a spot in this year’s national meet.
Garza thanked her team for her success. “I was glad that I had my team backing me up. I couldn’t have done it without them leaning over my lane screaming or whistling from the sides of the pool.”
Be sure to follow up with the Big Red in Greensboro, North Carolina for the NCAA D3 National Swimming and Diving Championship starting March 16.