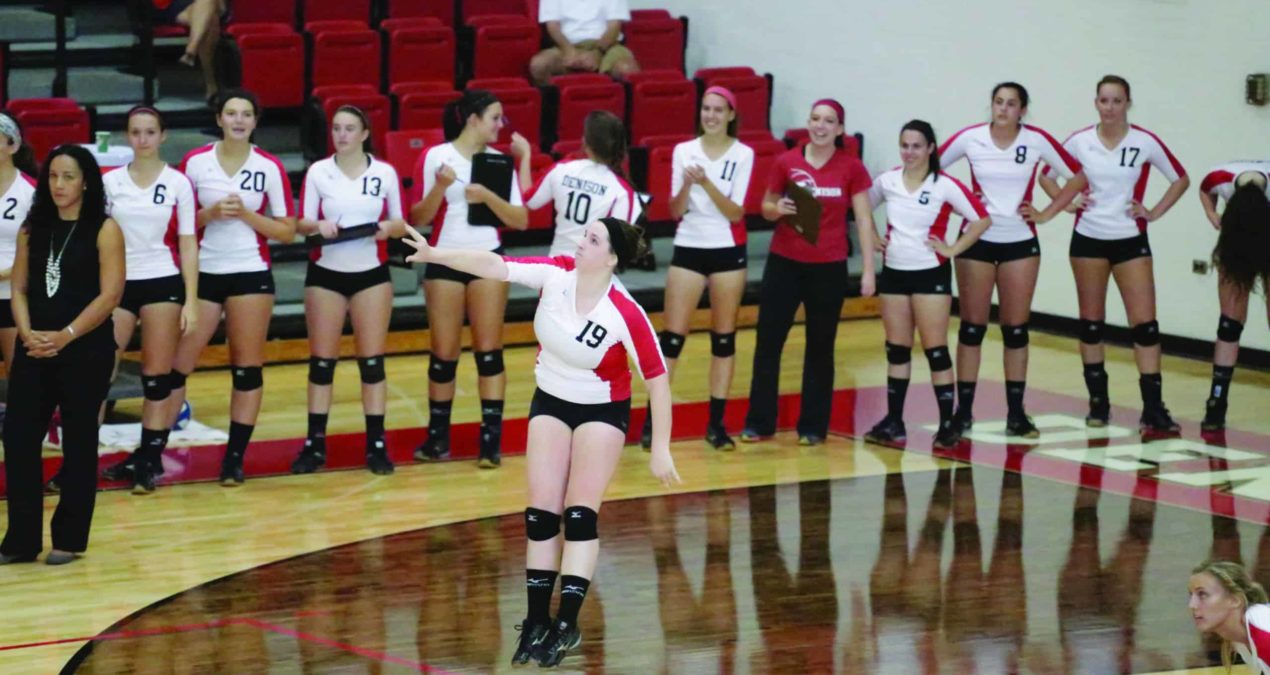 The Denison University volleyball team is a well-oiled machine.  With three games this past week, DUVB was able to come out with two wins over Muskingum and Pittsburgh-Greensburg, thanks to high spirits and dedication to the sport.

The girls fought for their win against Muskingum when they took the Fighting Muskies to five sets last Wednesday. Denison started off losing the first two set but had kept the scores of each close. Then, in a rally comeback, the Denison Big Red shut out their opponent by winning the next three sets with a 15-8 close in the final set.

Fueling from this win, the girls went to Hiram for a two-game tournament against host Hiram and visiting Pittsburgh-Greensburg.  With the crowd in high energy, Denison fought hard against Hiram but failed to pull out the win. Not letting their spirits get down, Big Red regrouped for their last game of the week.

With a strong start to Pittsburgh-Greensburg, the volleyball team used all of its resources to shut down the Bobcats in three straight sets. These girls have a fire inside them that allows them to learn from each game and adjust to their opponent.

“It was nice to contribute to the team again,” Katie Aucamp ‘20, who came back from a concussion this past week. “Our team works really well together and we hardly let stuff get us down. If we lose it just motivates us even more for the next game.”

With a whole team effort, Denison Volleyball is happy to have these wins under their belt as they move forward. The girls move around the court with a systematic order and grace in a way that it looks like a dance.  The team hopes to continue the positive energy and hard work in the upcoming weeks.

“We put so much work into practice and therefore it is nice when all of our effort pays off. I’ve never seen a player not give everything she has in practice and games,” Maddy Matura ‘20 said. “Playing in the last win over Pittsburgh-Greensburg as a strong team felt really good and I hope we have more wins like that coming up.”

Denison Volleyball is not to be overlooked the rest of the season, as the team has clearly shown their dedication and determination to become even better as a unit. With the end of the regular season approaching soon, this team shows no signs of slowing down.

“We definitely are not going to give up,” Aucamp said. “If anything I think we are just getting started and have a lot more work to do. We should not be overlooked.”

DUVB has two games this week against conference teams. Come support them Wednesday as they face off against Ohio Wesleyan at Mitchell, and travel to Allegheny this Saturday.