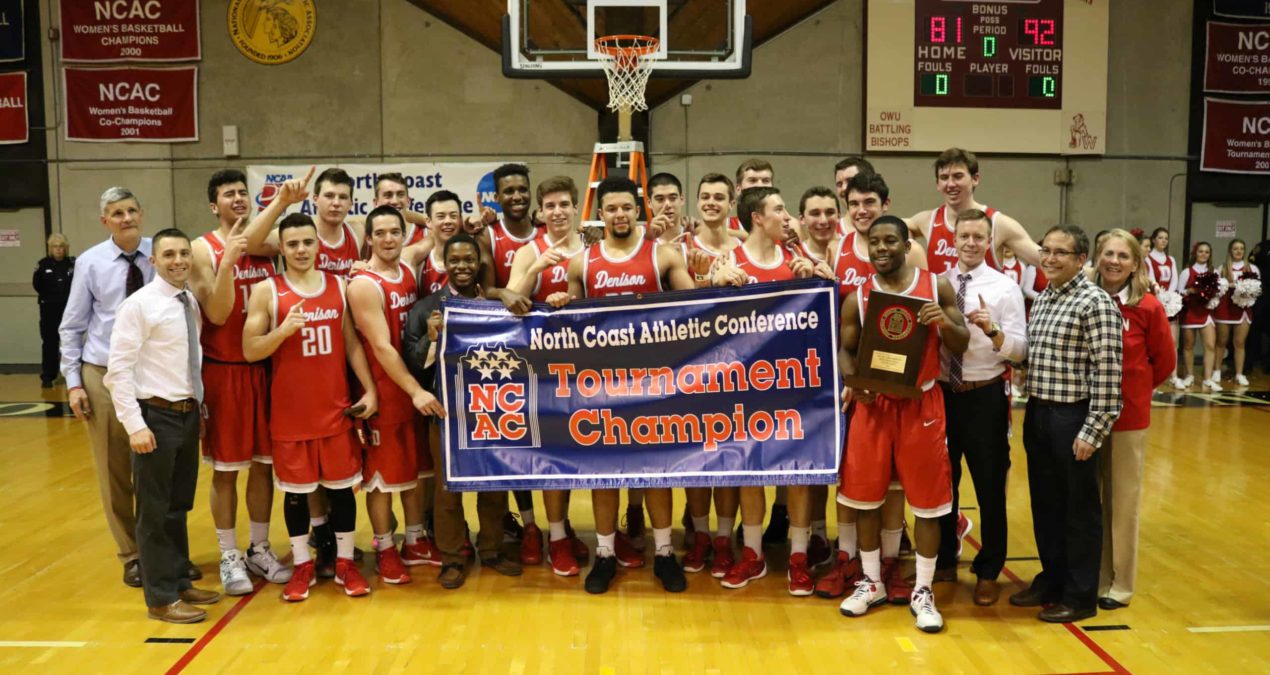 After first NCAC championship, men’s basketball ends at first round of NCAA

All good things must come to an end.

Denison put together an impressive NCAC Tournament run to capture the first conference championship in program history.  In the final, they defeated the Wooster Fighting Scots.

Eventually, a team of Scots got revenge.  Alma College may lack the “fight” in their mascot, but these Scots tripped up Denison, 74-60, in the first round of the NCAA Tournament.

Alma started their season 1-3 before going onto win the MIAA Championship.  Their fast-paced run-and-gun offense proved to be too much firepower for the Big Red.  Five Scots scored in double figures in the victory.

For the Big Red, their magical conference championship tale comes to an end.  It ended poetically, albeit with disappointment.

Head coach Bob Ghiloni cleared his bench in the final minute and put in all four of his seniors.  John Cheng ’16 and Darius White ’16 embraced during the stoppage, realizing that they were only moments away from the end of their basketball careers.

“It was like a mutual goodbye and congrats to our careers.”  Cheng said.  “Being seniors, we’ve both been through so many ups and downs, so it was just like an acknowledgement of like, hey, yeah, we lost, but we’ve done a great job here and we left it all out there.”

Jett Speelman ’17 led the Big Red with 15 points.  Devon Pitts ’17 led Denison with nine rebounds.  White finished with 12 points and four assists.  He made four threes, including the final attempt of his career at the buzzer.

“Initially, the three didn’t mean a whole lot to me because the only thing on my mind was that our season was over and I would never get to play with my brothers again.”  White said.  “But it is also kind of funny that the last shot of my career is the same way I started my career here.”

The Big Red end their season at 17-12, the most wins in two decades.  They also captured the first NCAC title in program history.  To label this season a disappointment would be short-sighted and far from the truth.

“I don’t want to speak on behalf of the younger guys because I want them to be hungry to do more next year,” Patrick Keller ’16 said, “but, for me, this year has been really special.  Being able to end my career with an NCAC Championship makes me feel like we really accomplished something. I was talking to some recent alumni…and wanted them to know they were part of it, too.  I think it’s the start of Denison basketball being a winning program and a consistent contender to go back to the NCAA [Tournament].”

Their season may have ended with a sour taste, but these players and coaches should have their heads held high on the sweetness of their historic conference title run.

Letter to the Editor: Greek Values

Argo lives up to the Oscar buzz