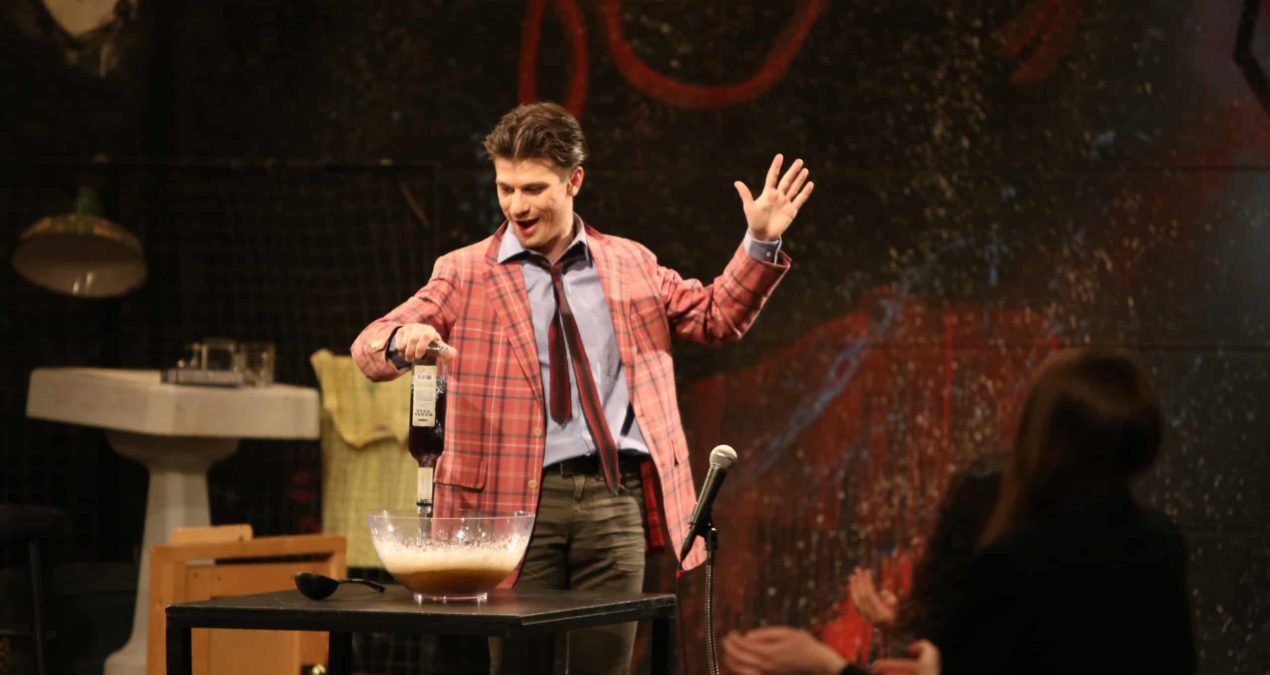 Margo Veil: an entertainment plays with questions of identity

The stage was dark, with flickering lights, bright graffiti smeared across the walls, and dirty furniture scattered across the floor.  It was a stage in the play, as well, as the performers threw open the garage door and shouted, “Welcome to the show!” and “How you doing tonight?”

They were quick to show that the characters were actors, and that their identities would be changing.

Once Margo Veil entered the picture, however, played by Shannon McDavid ’17, that’s when the identities became really blurred.

Margo Veil, a character trying unsuccessfully to work her way up in her acting career, finds herself in a bit of an identity crisis when she and her boyfriend, Arthur Vine, played by Davis Cameron ’18, end up in trouble and seek to “jump” into other bodies so as not to be caught by the cops.  Big Betty and Dwayne, two wildly sassy characters played by Priscilla Star Diaz ‘17 and Aaron Robertson ‘16, assist Margo and Arthur in their “jump,” by pulling down a shear black curtain while a voice recording cornily shouted, “Wee-whoo!  Wee-whoo!”

On the other side, Margo transformed into a poor blind girl in Lithuania, played by Maria Hollobaugh ’18, who was led by her grandfather with a rope tied around her hand.  The blind girl did not know that she was Margo, though Big Betty had warned of an “itch,” a feeling that you are not actually in the right body, that the identity you have shown is not actually your own.

Several heartbreaking stories, including that of the blind girl, a man who took on the identity of a murderer after playing one in the theatre for so long and a compassionate magician, all interwove to create a story which cause confusion and identity crisis not just for the characters in the story, but for the audience as well.  However, there were telling lines, when a character called a drama professor Margo who then quickly corrected him and said her name was Vivian, for example.

“I thought…that it was going to be super confusing,” Sophie Kollin ’18 said, “but the actors were so good at what they were playing.”

“Every single one of the actors did a great job immersing themselves in the conventions,” Matt Harmon ’16 added.

Indeed, the actors were able to take a moment and make dramatic gestures and voices that brought out a good laugh, and then in the next moment bring them to tears with the emotional story of the blind girl who was forced to sing at trashy bars to make her living.  The transitions between these scenes were effortless, and there was no doubt about what was supposed to be funny and what was not.

Though the intricacies of the plot sometimes were hard to follow, and the set sometimes did not cooperate, the actors worked around the flaws and produced a very entertaining performance.

“I enjoyed that there were moments that didn’t work as well as others…there’s a nice vibe.  It’s transparent,” Harmon said.

The play, written by Denison’s current playwright in-residence, Len Jenkin, in all of its complexities and overarching themes, was “nothing like what Denison theatre usually does,” Harmon added.

“The play is pushing the audience out of their comfort zone…it’s saying, ‘we want you to figure this out,’” Sophie Kollin ’18 agreed.

Despite the plot points, which sometimes were confusing, the play Margo Veil: an entertainment delivered on its promise and was extremely entertaining, with not a boring moment in the entire production.  Its combination of humor and deep emotional conviction was memorable and thought provoking in all respects.

“Jesus Is King” is a frustratingly imbalanced experience