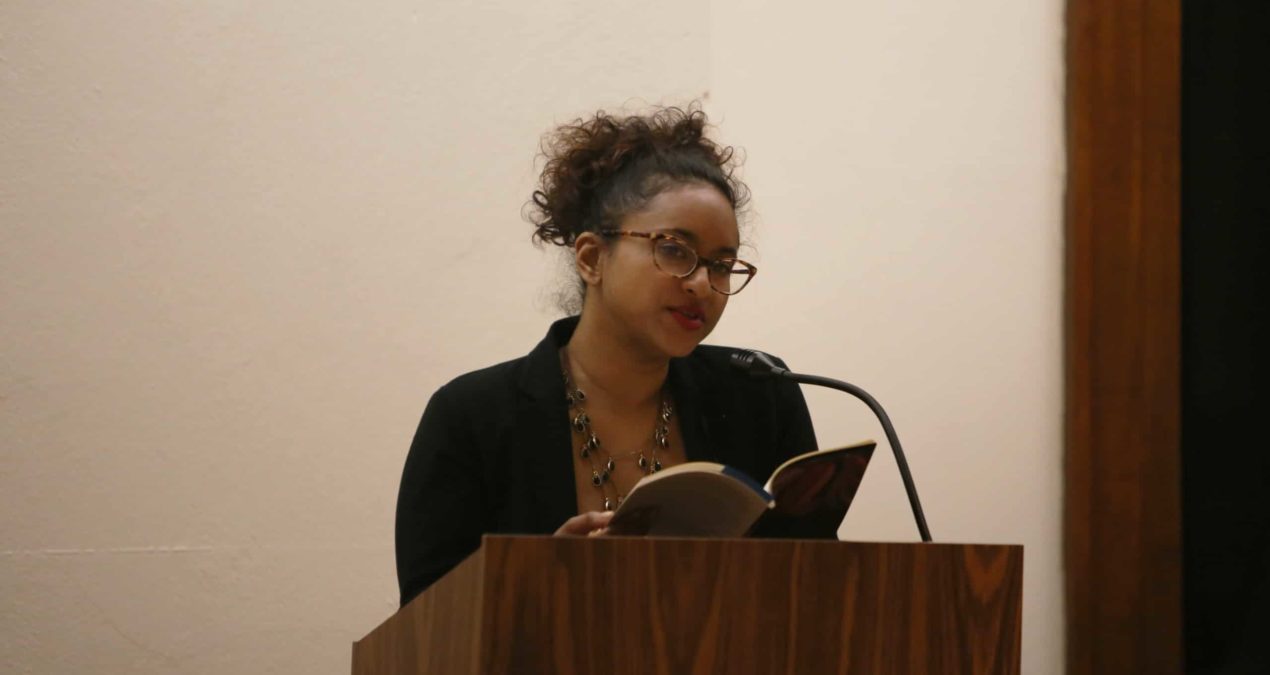 Tarfia Faizullah read from Seam—her book of poetry, in addition to some of her other work. Professor Ann Townsend introduced Faizullah, saying, “from start to finish, Seam represents a harrowing act of empathy.” Empathetic indeed, Faizullah’s book draws on the experiences of the hundreds of thousands of Bangladeshi women who were attacked and raped during the country’s 1971 Liberation War. These women assaulted during the war were labeled “birangona women.”

Faizullah grew up in west Texas, the daughter of Bangladeshi immigrants. Because of her family ties to Bangladesh, she always felt a connection to the country. However, it was learning about the birangona women from a fellow writer that sparked her interest and led to Seam’s inception. “I had never heard about this happening to women in Bangladesh before so I became really curious about it,” said Faizullah. Feeling inspired, she applied for a Fulbright scholarship and traveled to Bangladesh for a year to interview birangona women. These women “are who I ended up writing the poems for,” she stated.

The product of a year’s research, Seam is written through the perspective of the birangona women. Faizullah read several of these poems. Each was immensely descriptive and beautiful yet sorrowful and often disturbing. A common presence among them was the theme of family. In the midst of great fear and pain, there was also a sense of strength and solidarity in her poems. In addition to channeling the experiences of the birangona, Faizullah also wrote from the perspective of the interviewer. In her poem “Interview with a Birangona,” the interviewer’s questions and the birangona’s responses are woven together cohesively. Every couple stanzas or so, Faizullah includes an “interviewer’s note” in which she illustrates the thoughts of the interviewer. The two different narrations blended together make the story feel whole.

Faizullah shared multiple poems unrelated to Seam. These included a poem for Flint, a tribute to an influential teacher who passed away, and a series of love poems. Poetry has always been part of Faizullah’s life. “My mom had me memorize and recite poems when I was pretty young—about two or three years old,” she remarked, laughing.

It’s clear that her early exposure to poetry has served her well. Faizullah is the recipient of numerous prestigious awards such as the 2015 Great Lake College Association New Writers Awards, the 2015 VIDA Award in Poetry, and the 2015 Binghamton University Milton Kessler Poetry Book Award. In addition to these awards, she has been honored with the Pushcart Prize, a Fulbright Fellowship, a Dorothy Sargent Rosenberg Prize, and a Ploughshares Cohen Award.

Finishing up for the night, Faizullah prefaced her last poem with a saying from her friend and fellow poet. She quoted, “the revolution could use more love poems.” Some intriguing food for thought.

Comic: “COVID & White Privilege”: Based on a true story