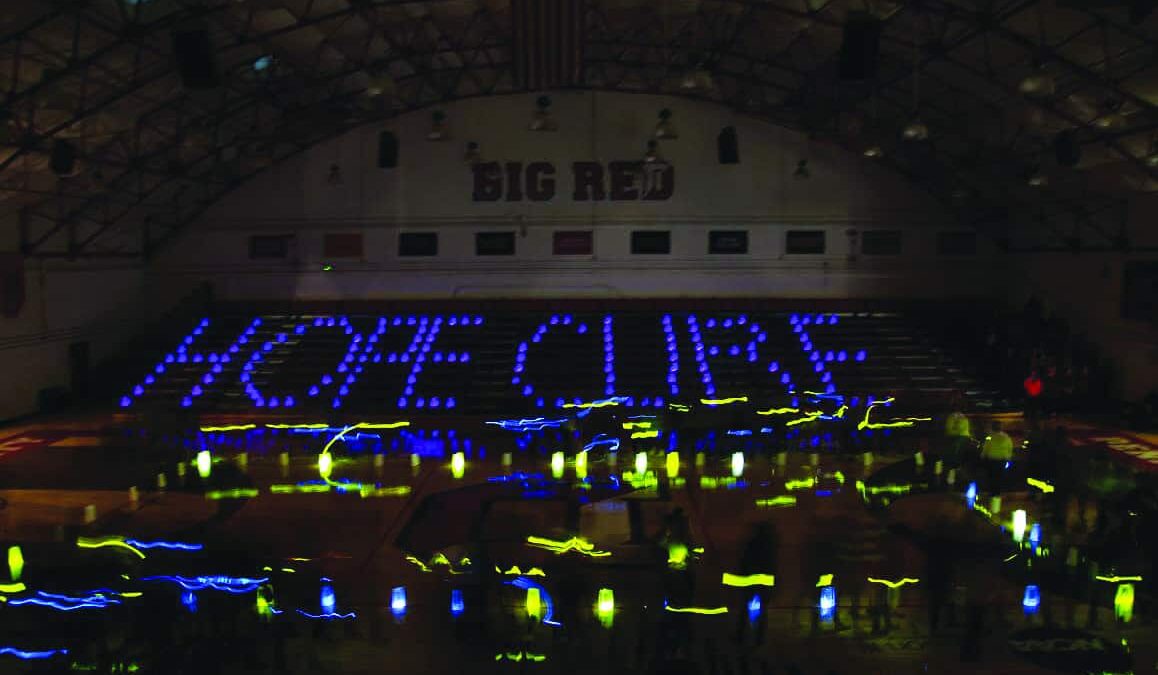 Students and staff gathered in the Mitchell Center on Friday night for Denison’s annual Relay for Life, an event dedicated to remembering and honoring those who are currently battling or who have lost or survived their fights with cancer.

“I’ve been affected by family members who’ve had cancer, and I know a lot of friends have as well,” said Max Meirow ‘18, who raised over $100 for the event. “This event always means a lot to me and to my friends to really acknowledge the reality of cancer and work toward its cure.”

Students had the option to register as a team or as an individual. Teams were formed from various campus organizations and groups, including athletic teams such as the swim and dive team and sororities such as Kappa Alpha Theta.

The key event of the evening was the luminaria ceremony in the Livingston Gym, during which Mary Lindsey, assistant to the director of campus safety and security, shared her personal experiences with breast cancer.

Following Lindsey’s speech, Denison Chaplain Mark Orten led students through the ceremonial breaking of the glow sticks which were handed out as students entered the gymnasium. Students were instructed to break their glow sticks when Orten read the category into which they fell, such as having lost a mother, grandfather, sibling or friend to cancer.

“When I started 13 years ago, my first year here,” said Orten.

“The only person that I knew was my grandmother, which was personal enough, but in the 13 years since the first time, my uncle and just in the last year my father have had some type of cancer. My uncle died, and my father is recovering, but it’s become increasingly personal.”

Orten continued this sentiment, drawing on his experiences as Chaplain.

He said, “It is true that in my work as Chaplain, it is natural that I would be asked, but I’m still very grateful to be a part of it.”

The event was organized by students with help from the American Cancer Society. Students such as Andrea Moreno ‘16, Callie Pace ‘18, and Molly Reckinger ‘18 were all members of the committee that organized and planned the event.

Moreno, the president of the committee, said, “It’s personal to me because my grandfather died from cancer, and I feel the huge power of information about cancer research and what people can do to prevent cancer in themselves or anyone else, really.”

“It’s not as well-attended as we would like it to be,” Moreno said. “Of course there are always the people who come back every year to do the event, but we would like to reach more people. Our goal every year isn’t to raise a certain amount of money, it’s to have our community come and actually be here and support everyone and each other.”

The event also featured a performance by The Ready Set and an amateur drag show put on by Outlook.

Student workers have no limit of hours permitted to work