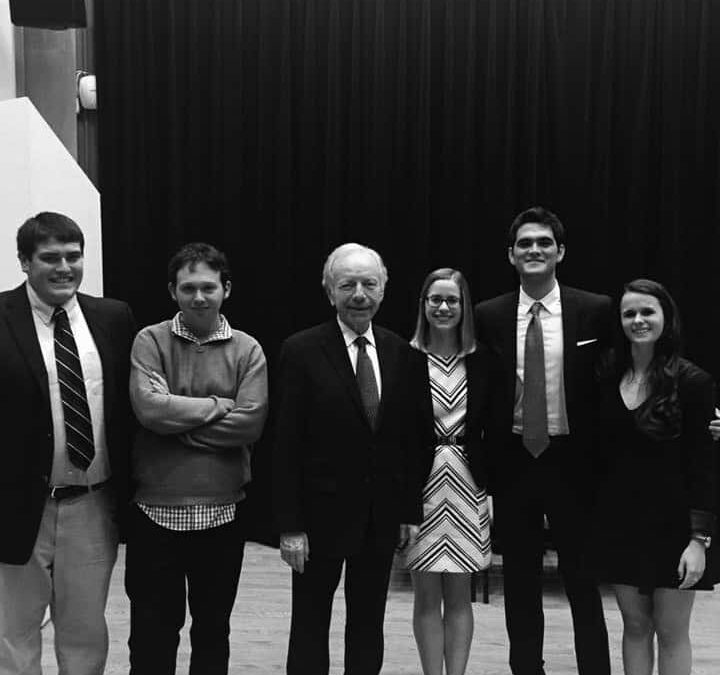 Senator Lieberman spoke to what was a large crowd of students, faculty and staff in Herrick Hall on April 14.

The event was provided to the student body through the collaboration of the Denison College Republicans and the Denison Democrats.

After Lieberman’s lecture there was a question and answer session where Lieberman field questions on a wide range of political and social issues.

Lieberman was a United States Senator for twenty four years  from the state of Connecticut. In the Presidential Election of 2000 he was Al Gore’s running mate on the Democratic Presidential Ticket that won the popular vote by almost five hundred thousand votes but lost the electoral vote to President George Bush.

Parker Sumwalt ‘18 participated in the question and answer session and discussed his reaction to Lieberman’s answer.

Senator Lieberman emphasis on bipartisanship has its roots in his maverick senate career.

In 2006, Lieberman lost his primary re-election campaign yet went on to retain his senate seat through the use of a third party.

In 2008 he broke with his Democratic party to endorse Senator John McCain, a republican, for president.

Sarah Hoffman’ 17 a member of the College Republicans said “I think the Lieberman event went really well. Both sides of the political spectrum came together and enjoyed a meal, as well as a great talk on political polarization.”

“With the political climate as it is today with the impending election, I think it’s really important to realize we’re all Denison students, and we can disagree but still get along and promote that bipartisanship on and off the hill,” Hoffman said.

David Allen ’16, the former president of the Denison Democrats, said that “Senator Joseph Lieberman gave a wonderful perspective about the current status of American politics.”