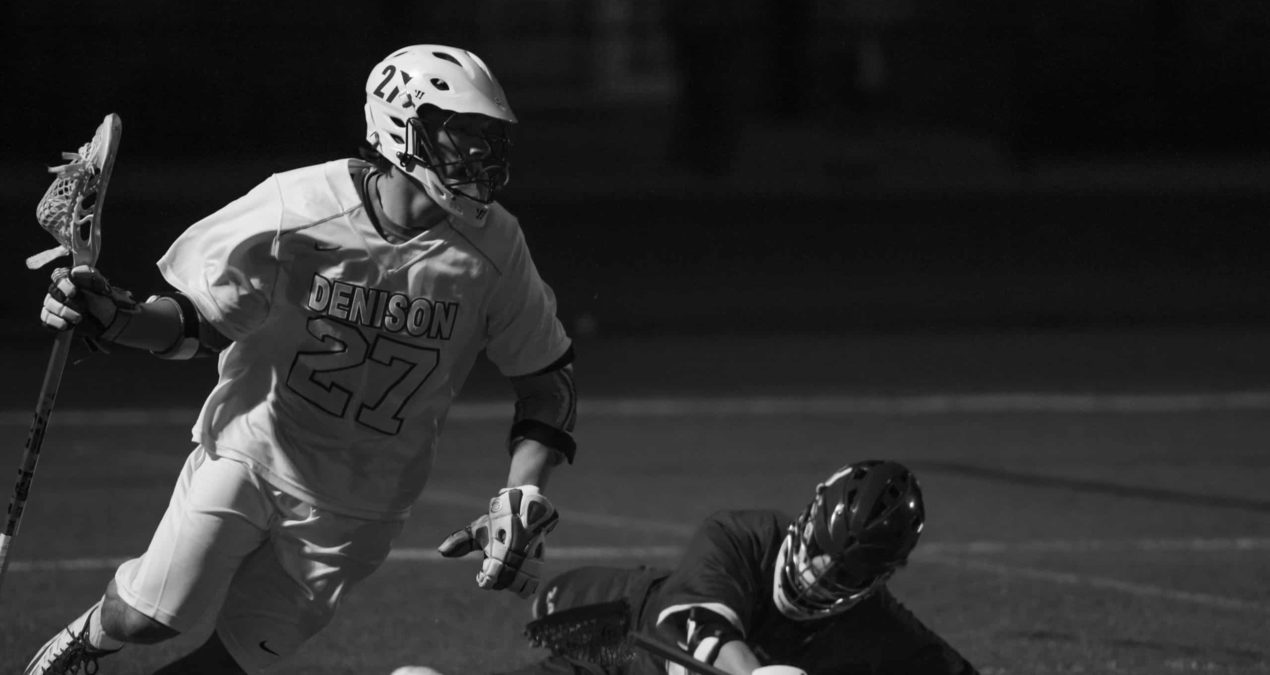 The Denison Big Red men’s lacrosse team was feeling great after the huge 7-5 victory last Saturday over their conference rival, the Ohio Wesleyan Battling Bishops to take the first place in the North Coast Athletic Conference.

“It was a really intense game. Our defense played really well. Chris Thomas ‘16 was in the cage stopping everything in sight. Our young guys on defense played really well.  We were able to put the ball in the net in the third quarter and it ended up being the difference,” said Eric Baumgardner  ’16, midfielder and face-off specialist for the Big Red.

After the victory against Ohio Wesleyan, the Big Red turned their focus toward the Kenyon Lords who Denison hosted on Tuesday, April 19. Kenyon has been one of the top teams in the conference this season.

“Kenyon was averaging double digit goals, so we had to shut down that high-powered offense. We knew that if we lost that game we would have to share the conference title. Coach (Caravana) was saying the whole time that we don’t share anything with anybody,” Baumgardner said.

Baumgardner continued, “The mindset going into that game is that we need to make a statement and we were upset because we had fallen in the rankings from 4 to 5 after the OWU win. So, we felt like we still had a lot to prove to everyone out there.”

In the first quarter, the Kenyon Lords looked like the high-powered-offense they have maintained all season.  They managed to keep up with Denison to make the game tied 3 to 3. However, the Denison Big Red exploded in the second quarter by scoring eight goals to make the lead at halftime 11-5.

In the second half the Big Red outscored the Lords 6-1 to win the game 17-6. Attackman/midfielder Liam Rooney ’17 led Denison with four goals, midfielder Blair Farinholt ’16 dished out five assists, and goalie Thomas had nine saves.

The home victory  over Kenyon marked Denison’s 12th straight win and 24th consecutive win at home. Their last home loss was on April 27, 2013.  The Big Red also retained the Thomsen-Heiser trophy, which goes to the winner of the Denison-Kenyon lacrosse game annually. The trophy honors a legendary coach from both programs: Denison’s Tommy Thomsen and Kenyon’s Bill Heiser.

The Big Red’s last game of the regular season was on the road against the Wabash Little Giants, a new lacrosse program.

“They’re  a second year program, so hopefully we can go there and take care of business. I know if we that win game we will the outright title for the NCAC. We’re hoping to hoist that trophy on Saturday,” said Baumgardner before the game.

“It’s crazy closing out the regular season but we’re happy that we will host two home playoff games because we will be the #1 assuming that we win. So, there will be two more games at Deeds,” Baumgardner said. “So, there are definitely a lot of emotions. It’s been a long journey and it’s coming to a close. But, it gives us more motivation to close it out the way we want to.”

Denison embarrassed the Wabash Little Giants at their place, winning in a 25-4 victory.  They outshot the Little Giants 49-16, which shows the Big Red’s potent offense and stout defense.

Brooks Davy ‘19 led the Big Red with 3 goals and 2 assists and goalie Will Nabors ’18 posted 4 saves. Baumgardner was 7-of-10 on faceoffs and scooped 5 ground balls.

The Denison Big Red ended their season on a 13 game win streak and were undefeated in conference play to finish with a 14-1 record. The Big Red will start to prepare for Wednesday’s semifinal NCAC tournament game, as they will host the Wooster Fighting Scots at Deeds Field.