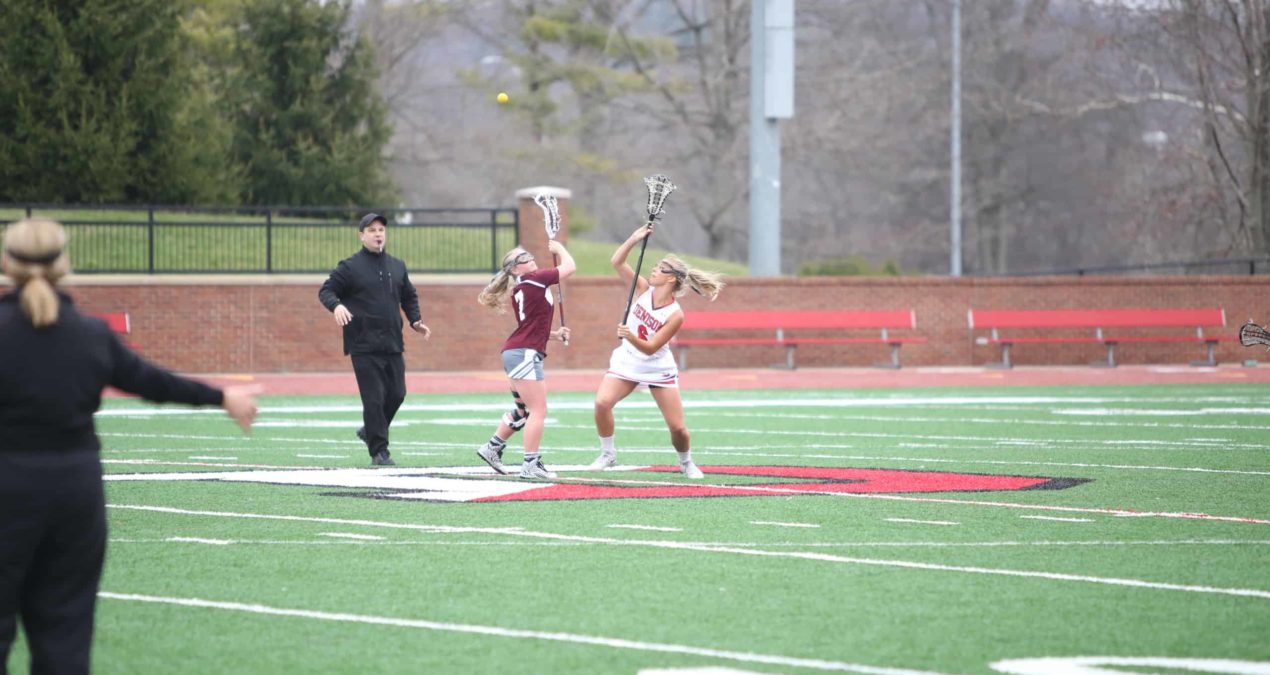 In the midst of heavy winds and plenty of snowfall at Piper Stadium, Carol Allen ’16 put Denison back into the win column with an unassisted overtime goal in an 11-10 win over Oberlin College.

Prior to Allen’s goal, the Big Red were locked into a back-and-forth battle with the Yeowomen.  Last year, these two teams faced off in the North Coast Athletic Conference Tournament Championship game, which Denison won 14-7. On Saturday, Oberlin was out for revenge, scoring first and taking a 6-5 lead into the half.

Neither team could get a lead of more than two goals with the Yeowomen up 9-7 in the second half.  With less than 15 minutes to go, the Big Red went on a run of three consecutive goals in the span of 2:03, including back-to-back scores by Leah Israel ’18 that put Denison up 10-9.  A late second half goal from Oberlin’s Marissa Maxfield tied the game up for the sixth time, forcing overtime and leading to Allen’s game-winning goal.

With the win, the Big Red returned to .500 at 5-5.  Allen scored twice and added an assist, Israel netted a hat trick, and Claire Ludlow ’17 paced the team with four goals and a pair of assists.  Ludlow also led the team with six draw controls as the Big Red controlled 16 of 23 draws.

“We didn’t do anything differently in terms of practice and game preparation, but there has certainly been a noticeable shift in mentality during games.” Ludlow said. “The chemistry and integrity that this team has is incredible, and it pushes me to go 100% in every minute of the game.”

Defeating Oberlin was a strong close to the week after a heartbreaking 13-12 loss to Mount Union on Wednesday.  It was a three-goal run from the Purple Raiders to close the game that led the Big Red to heartbreak.  In the loss, Ludlow scored five times while Halle Walsh ’18, Lizzy Pellicane ’16, and Claudia Rafi ’18 added two goals apiece.

“Close victories are always exciting, and Saturday was just that.” Israel said. “Especially after the tough loss on Wednesday, none of my teammates were going to accept another loss.”

Denison concludes their three-game homestand this Wednesday against conference foe Wooster at 6 p.m.  Afterward, the Big Red travel to Hiram, Ohio, to take on the Terriers, on Saturday at 1 p.m.