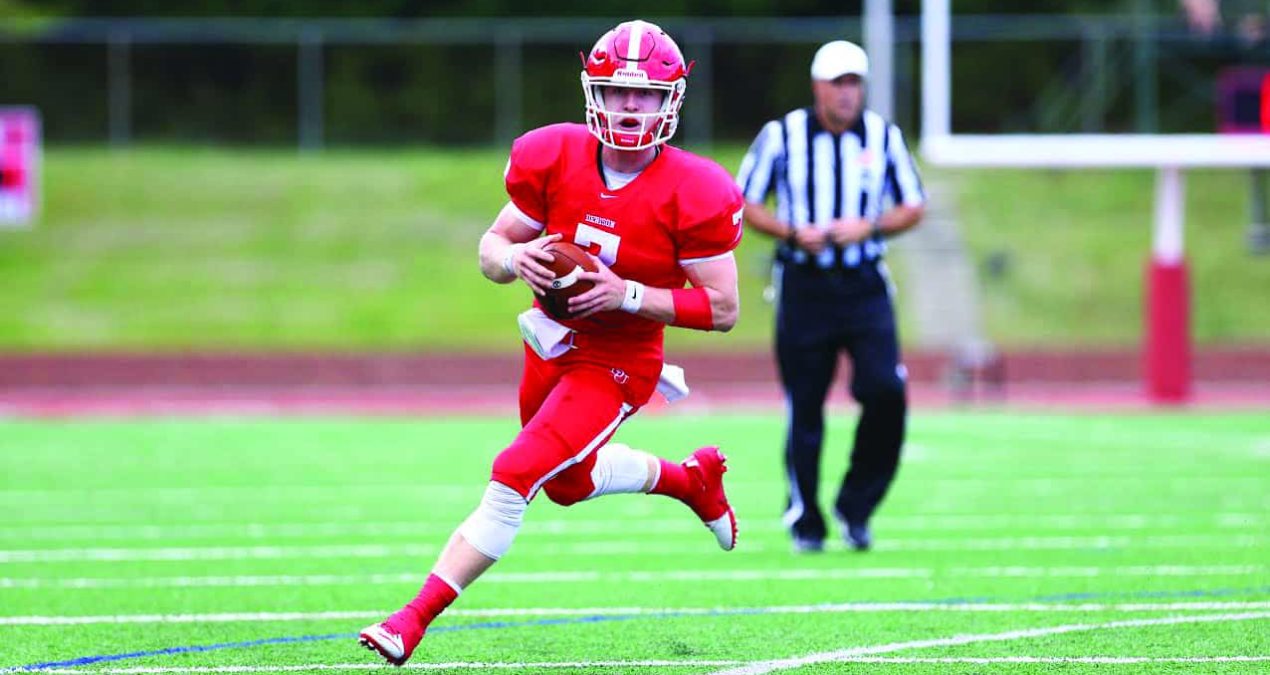 Conor Dunn ‘17 lines up for a 39-yard field goal. It is a chip shot for the senior placekicker. This kick would give the Big Red a 17-14 fourth quarter lead against the 14th-ranked Wittenberg Tigers. It would mean the first win over Witt after 22 consecutive losses.

“I was definitely beating myself up for missing that kick, but my teammates helped pick me up and keep me focused.” Dunn said.

What ensued was a back-and-forth mixture of chaos and hope, thrill and agony.

First came a punt return fumbled by David Carter ‘19, giving Wittenberg a short field and an attempt to break a 14-14 tie. The Tigers got inside the Denison 10 yard line, but Zach Neufeld ‘17 forced a fumble, which was recovered by Andrew Baird ‘17, giving the Big Red another offensive opportunity. Baird also had 10 tackles, breaking the school’s career tackles record (since 2001, when the tackle became an official stat) in the process.

“We [the defense] were going to try hard to do anything we can to stop them.” Baird said. “I heard people scream ‘ball’ and just tried to get my hands on it. At the bottom of the pile anything can happen, and I was fortunate enough to be there and fight to get the ball.”

Off the turnover, Canaan Gebele ‘19 led an eight play, 94-yard touchdown drive to give Denison a 21-14 lead.  Cody Farley ‘19 made an important reception and punched the ball in on a two-yard rush for his second score of the evening.

“The feeling I had [after scoring] was indescribable.” Farley said. “The look on all of my teammates’ faces was that we had this game won.”

But Wittenberg would match the Big Red on their next possession, tying the game at 21.

A Denison three-and-out gave the Tigers the ball once again, needing just a field goal to get the win and keep their undefeated season alive.  Wittenberg advanced the ball near midfield before quarterback Jake Kennedy decided to air the ball out.  Getting in the way was Denison safety Ryan Zinkula ‘19, who intercepted the pass and gave the Big Red the last offensive opportunity.

“I saw the receiver open and I don’t think the quarterback saw me coming over the top. When I saw the ball in the air I knew I was going to have a shot to come down with it.” Zinkula said. “I was just pumped to get the ball back for our offense.”

Running their two-minute offense, Denison drove to the Wittenberg 15 yard line. David Weimar ‘19 caught three passes to help the Big Red get within field goal range. On the day, the sophomore wideout set a new career-high with 154 receiving yards.

It all came full circle for Dunn, who split the uprights on a 33-yard attempt with 21 seconds left.  That gave the Big Red a 24-21 lead.

“I was just doing my normal warm up kicks and remembering my fundamentals,” Dunn said. “It’s a kick I’ve hit a million times before, I just had to go out and not overthink it. I was just so happy to have been able to come through in the clutch for my team, for how hard they all work. I was just so proud of our program.”

But there was still time on the clock.  The Tigers had to try and get into field goal range to send the game into overtime, but Joel Lohoua ‘17 intercepted a pass to seal the victory.

“They picked on me the whole game,” Lohoua said. “But I wanted to stay aggressive. They threw it and I just wanted the ball. I was stoked.”

“The win means so much for the program.” team captain Drew Gray ‘17 said. “It shows how hard we’ve worked and how far we’ve come to get to this level.”

Denison will be staying in Granville over fall break, hosting Allegheny for a 2 p.m. contest on Saturday. Atop the conference standings and still undefeated, the next few weeks will be uncharted territory for the Big Red.