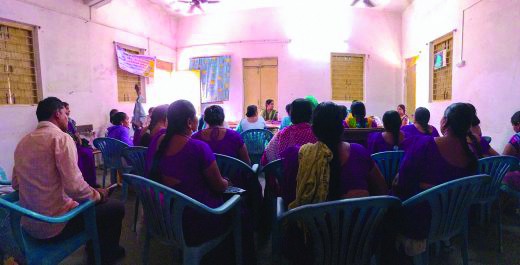 A child is sat down on a hospital bed in Mungeli, a town in northeastern India. He’s being treated for a snakebite, and the room is filled with other patients, some connected to defibrillators.  As the child is being tended to, one of the defibrillators goes down, putting a man’s life in jeopardy. A nurse grabs Maria Taylor ’19, hands her a bag and instructs her to begin pumping oxygen manually until a technician can fix the machine. This was her first night at the Mungeli Christian Hospital in Mungeli, Chhattisgarh, India.

“I don’t think I can ever forget my first shift there,” Taylor said. “Almost anyone could’ve done that job with ease, the idea that I was breathing for this man was a powerful thought for me. It gave me something palpable to hold onto as I continue to study to go to medical school.”

Taylor went to Mungeli for the summer along with five other Denison students over the summer to work at the hospital. The internship is a pilot program set up by the Knowlton Center for Career Exploration, which provided a stipend for the six students studying there. Those students were Archit Agarwal ’17, Naomi Barker ‘17, Jane Higley ‘18, Liz VanNess ‘17 and Ceginna Shi ’18. The hospital is almost an hour from the nearest city, making it a more utilitarian-style hospital than some of the more advanced ones found in the big cities. Agarwal, the only student originally from India, still found the experience eye opening and unique.

“This hospital is built to be cost efficient while providing cheap healthcare,” Agarwal said, who worked with issues in public health. His responsibilities included creating a body mass index dataset for 650 students at the school, a handwashing workshop, and making registration more effective for patients. One survey he and Naomi Barker administered about a mobile health clinic may be utilized in the hospital and they might be published in a scholarly article.

The students worked with women often, and Taylor found that work to be the most rewarding.

“There are too many women in all countries who don’t get proper medical care,” said Taylor, whose duties included screening for cervical cancer and helping with cesarian sections. The Mungeli Christian Hospital is one of the only hospitals in the region that offers cesarian sections. “I want to be a doctor who can not only work to give women the basic medical care they need but also the care they need to feel comfortable and well informed about their body.”

Agarwal hopes to work with development, policy and public health after he graduates. Working at a rural hospital in India showed him the strides required for a rural area in a rapidly developing nation to become as effective as the ones in fully developed nations.

“The hospital is one of the only sources of healthcare for almost 700,000 people living in over 180 villages,” Agarwal said. “There was little investment in overall beautification, but seeing the hospital and the work it did was very meaningful.”