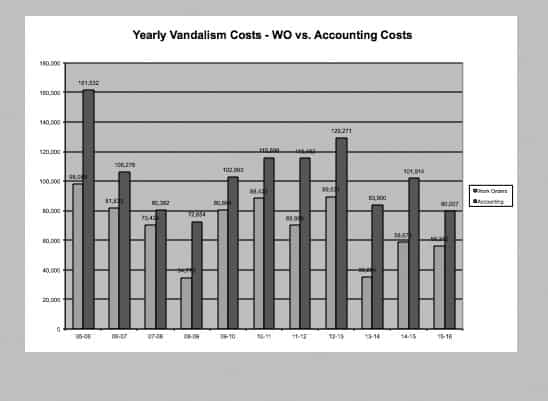 Vandalism at Denison is a problem. According to data provided by the office of facility services, It does not affect one area more than another. The Sunnies apartments do not endure any more measurable damage than Shorney Hall.

“In general, the type and location doesn’t change much from year to year, just the amount,” said Arthur Chonko, the director of facilities services for Denison.

One possible explanation for these waves and troughs is that a student body can only commit so much damage, and the next year it will decrease relative to the disastrous year before.

Another possibility is that there is absolutely no reasoning behind the damages, except that one year there might be 50 holes in the wall while the next only 25 kids took hammers and beer bottles to their dry-wall.

Students on this campus see vandalism occurring throughout the year, whether they were there or not. The creation of the popular smartphone app snapchat has likely increased the viewership of these acts. Only a select few people on this campus actually know who spray painted the penis representation outside Huffman Hall, and most of these acts, while only speculation, are committed on the holiest of nights to vandals: Wednesdays, Fridays and Saturdays.

“I think it is pretty safe to say the majority of it involves some sort of substance abuse such as alcohol,” Chonko said.

There may be no answer to stopping students from vandalizing Denison because tuitions are rising, and these acts are not fading.