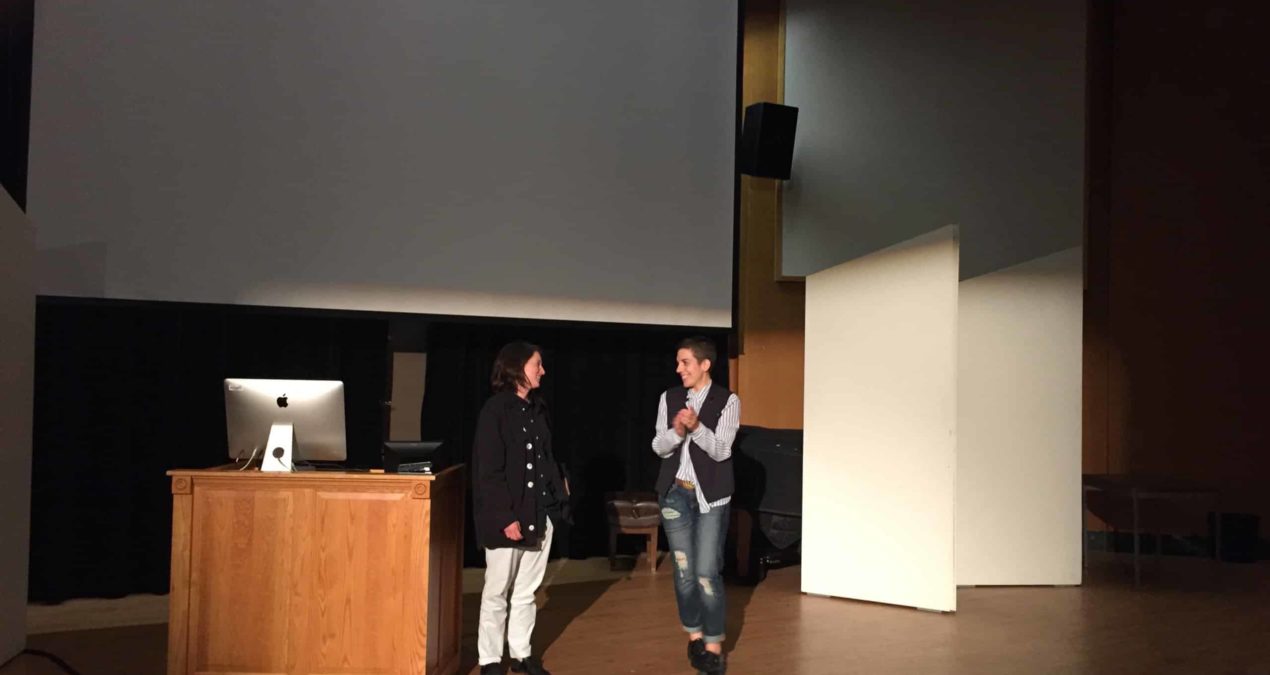 Feminism. Technology. Politics. Capitalism. Elizabeth Orr critiques it all. And she does it through art.

It is her self-awareness as a 21st century artist in the United States that allows her to assess the social, political and economic structures around her. She came to Denison to share her experimental videos that address the systems millennials face and, sometimes, fear in the technological age.

Orr is the daughter of Eric Orr, a sculptor and installation artist, who was a key figure in the Light and Space movement in southern California in the 1960s. She grew up in the Los Angeles area, inspired by her artistic father. She attended Hampshire College, where she met her friend Em Rooney, who is currently a visiting professor in the studio art department at Denison. After college, she created documentaries about her father, preserving his legacy. In 2014, she received her M.F.A. from Bard College.

Orr now lives and works in Brooklyn, NY. She’s had exhibitions in New York City, Philadelphia, and southern California, and is part of No Total, a reading group that provides a space for artists to read and discuss books in New York. She’s released screenings of her films and has given lectures at colleges around the United States.

“Her art shows background in philosophy, politics, and feminism in capitalist society. What I love most about Orr’s work is how these systems become intertwined,” said Rooney as she introduced Orr to the stage at the Knapp Performance Lab.

Orr streamed her videos from her Vimeo account on a projector screen. After each video, she eloquently spoke of her motives and experiences creating the video.

Her first video she streamed to Denison students was “Work Ethic.” It was part of the “First Among Equals Exhibit” at the Institute of Contemporary Art, Philadelphia in 2012. As two women stand in what looks like a quiet, white-walled art museum, they verbally compliment each other. There is a cloud of purple light on the right side of the room. The camera stays in one angle for the entire video, resembling a security camera’s point of view.

A few people pass by, observing art, and moving to the next room, as the two women stand, facing each other, talking with their hands. “Wooork!” “Amazing!” “Do you!” “Go for it!” “Perfect!” “100%” “Totally!” are the only phrases the two women repeat to each other for the entire duration of the short film. The only other sound in the video is a daunting horn that produces its own beat.

After the video was done, Orr explained that the repetitive affirmations between the two women came from clips of interviews of women from two different parts of the New York art world–one in fashion, one in sculpture.

“The endurance of affirmation was providing humor and also a way to look at how they speak to each other and the way they share their work,” said Orr. Two artists who produce two different works of art are able to recognize each other’s struggles in the competitive art world. They both recognize it is necessary for each of them to feel valid.

In Orr’s video “Nicholas and Hillary,” her zeal for political and social criticism is highly apparent. In the beginning of the video, a red-haired woman, Jane Levy, introduces herself as Nicholas Negroponte, the founder of Massachusetts Institute of Technology’s Media Lab, who helped jumpstart the wide access of internet. Another woman, Mariana Valencia, introduces herself as Hillary Clinton. The women are not dressed to look like their characters, but rather just themselves – confessing directly to the camera that they are indeed someone else. Together, they act as the neoliberal superpowers (Negroponte and Clinton), debunking the early development of the internet.

In the beginning stages, computers were exclusive to government organizations. “Negroponte,” really Levy, in the video, critiques how “these entities came already equipped with their own ideas of efficiency,” as if this new invention suddenly enters society with its own intelligence that quickly dominates our world.

“Clinton,” really Valencia, focuses on balancing the way in which she reveals her personal life as a public figure, saying, “I could not effectively serve the people if I focused on the failings of my private life.” The camera is always circling around the women or intimately close their face, a conversational way.

The video was shot within a 360-degree tracking shot at Artists’ Space Books and Talks in New York City. The direct act of two women bending their identities provides humor, but also represents the ambiguity of identity one may hold behind a computer screen on the internet.

Orr was inspired by Sandy Stone’s book, The War of Desire and Technology at the Close of the Mechanical Age. “As you’re participating in the public space of the internet, you’re also on the other side, doing your own thing, being whoever you are, but there’s this development of ambiguous gender as you’re allowed to participate in the fantasy of your gender” said Orr.

Orr also screened her most recent work “Mt. Rush.” The video features a woman, Ann, who works as a park ranger. As a ranger in the middle of nowhere, she feels disconnected from the presidential candidates, yet receives emails from presidential campaigns, encouraging her to make donations. She slides her finger in the air, interacting with her email inbox displayed in the air like a hologram. She quickly becomes annoyed by the incessant emails. At a bar, she says “I know they’re analyzing my click-stream.”

Her idea for “Mt. Rush” sparked from a personal experience. Like Ann the Ranger, Orr was fascinated, even offended, by the process of incessant political emails. After contributing money to a fund for abortion rights, she received an influx of emails from Democrats and Republicans. Orr quickly caught on to how people sending emails for politicians observed her click-stream. She analyzed how she, by passively receiving emails, is directly allowing them to make more money.

She became aware of how she functions in our society’s capitalistic structure. “If I’m receiving these emails, I’m providing content for them to make new emails and try to get more money, but I can participate actively by using their emails as creative content for my own work” said Orr. She smartly turns their stealthy, capitalistic process into her own art – what Orr considers “a fair trade.”

A variety of social and political topics are at the core of Orr’s works. Orr’s skill lies in exposing her interpretation of the world around her in art.

Denison students watched her videos and gained insight in how art can be a form of critiquing the complexities of society, simultaneously critiquing themselves.