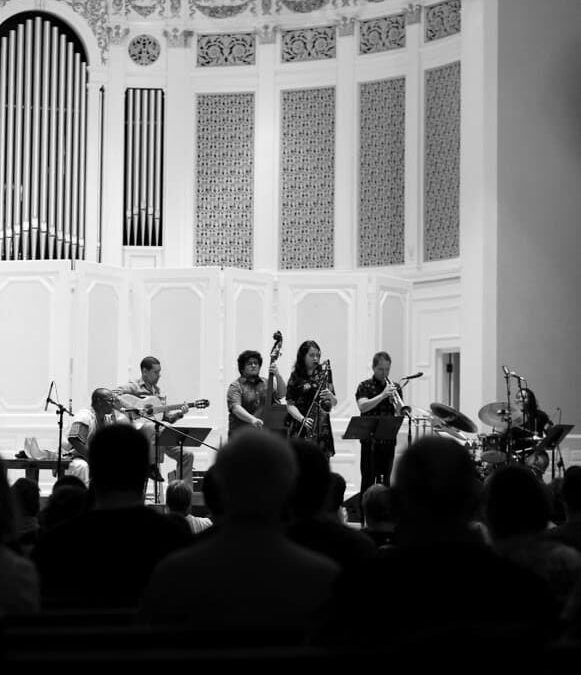 Between the fun, constantly changing tunes and the quirky, familial vibe of the performers, Gabriel Alegria and the Afro-Peruvian Sextet gave a performance that left everyone in Swasey Chapel with a smile on their face.

As the first Vail Series concert of the academic year, the visiting musicians kicked off with an energetic, innovative mix of jazz songs that kept the audience guessing, as the rhythms changed constantly from one beat to the next.

The performance displayed of different influences of many other music genres.  One song interpreted traditional waltz tunes and rearranged it to give it some Peruvian flair.  It was slow and romantic while including some playful, almost flirty notes from the saxophone.  At one point the musician Laurandrea Leguía pulled up one leg against the other as if physically straining to reach the highest notes.

While there were some slower numbers, the Sextet continually hyped up the audience with intricate rhythms and ridiculously difficult notes.  At one point Alegría played such an intense note on the trumpet that the microphone directly in front him physically swayed backwards slightly.  That is the best way to describe the band; they were constantly seeking the most intense notes and intricate rhythms, testing the limits of jazz simply for the joy of hearing such wonderful tunes.

The musicians found ways to keep things interesting as well.  The percussionist, Shirazette Tinnin, utilized all parts of the drum set, even tapping the metal poles on the side which held the set together, producing an interesting sound.  Guitarist Yuri Juarez and bass player Mario Cuba strummed and plucked the strings of their instruments in new and athletic ways, having to move quickly to pull the strings, unique to each song.  Freddy “Heuvito” Lobatón was a jack of all trades, moving from the cajón (a box that the percussionist would sit on and tap with his fingertips, knuckles, and palms to produce different sounds) to the quijaba (the jawbone of a donkey) and the cajita.  The cajita is a box with a shoulder strap that can be tapped with a wooden rod, and also has a lid that the opening and closing of which produces a unique, hollow tapping sound.  Lobatón even gave a little zapateo performance at the end, which was like a combination between a stepper dance routine and tap dancing.

Although the overall performance was great, the highlight had to have been when the group premiered a song never heard anywhere else before.  Alegría said that the group had not been planning to play it before they came but that the atmosphere at Denison was right for it as the week progressed, and they were able to work in some rehearsal time to prepare it for the concert.  Leguía had written the song and it definitely stood out from the rest of the performance, with outstandingly intricate soprano saxophone rhythms and notes that seemed to turn Leguía’s face blue.

Despite the fact that the Vail Series brings in wonderful artists each year, Margot Sherman Jollis ’18 and Sruthi Viswanathan thought that not enough students attended the event.

Viswanathan agreed, saying, “They are always ending up being really good…not enough students show up.”

For all of those in attendance, however, the performance was enriching and energizing as the Sextet brought the wonders of Africa and Peru to life in stunningly intricate and evolving jazz music.