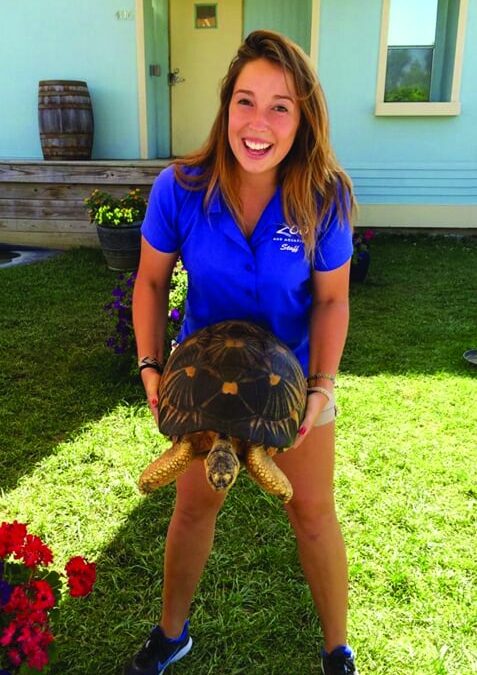 This year has been nothing short of extraordinary for Charlotte King ‘17, a biology and environmental studies double major from Wooster, Ohio. She spent the 2016 spring semester studying abroad in Turks and Caicos where she was involved in the Marine Resource Management Program. King met with The Denisonian to talk about the important things she has been working on both on and off campus.

While abroad, she studied habitats in the Caribbean Coral Reefs and the seagrass beds. She also scuba dived to take population assessments of the main fishing industries on South Caicos. Her abroad experience was full of learning opportunities.

“My favorite part was the directed research” King said. “At the end, I worked with high school students and we did a project called photovoice. It’s an international social science project where you pick an under marginalized community and give them cameras. They take pictures based on a prompt and then you do an interview. I worked really closely to see what was important to the high schoolers on the island and how they were making change based off of it.”

Studying abroad has made an impact on King as she conducts her senior research for the Environmental Studies Department. She is taking her research from South Caicos and applying it to Denison students.

“There will be a survey coming soon about if any ocean experiences in their childhood or earlier education years relates to their actions with water conservation or their knowledge of ocean conservation” explained King.

King’s love for biology and the environment helped her get a summer job at The Columbus Zoo and Aquarium.

“Columbus Zoo and Aquarium is a wonderful place” says King. “It’s an interesting dynamic having a non-profit zoo attached to a for-profit water park which means we have very nice facilities but we also donate a lot of money to conservation.”

Of course, some of her most memorable experiences from working at the zoo was from her interactions. “Working with animals is really great especially because I interact with the public as well” said King. “We get to teach kids and adults about the natural adaptations of the animals that we work with.”

After graduation in the spring, King hopes to immediately put her biology and ENVS double major to use. “I’m trying to do ocean conservation education for marginalised demographic communities and I’m applying for the Peace Corps in the Philippines. I’m also applying for City Year which is an AmeriCorps program. Or I also might just move to an island for a couple years and work at a turtle rehabilitation center.”

In addition to the many projects King has been working on, she is also very involved on campus. She is involved in the Outdoors Club, the Denison University Biological Society and The Doobie and she is an ambassador for Off Campus Study office.

If Charlotte were to give advice about keeping up with a busy schedule, it would be to keep an organized schedule, get enough sleep and stay ahead of your work.

Charlotte King ‘17 decided to become a biology and ENVS double major because of her interest and love for the environment.