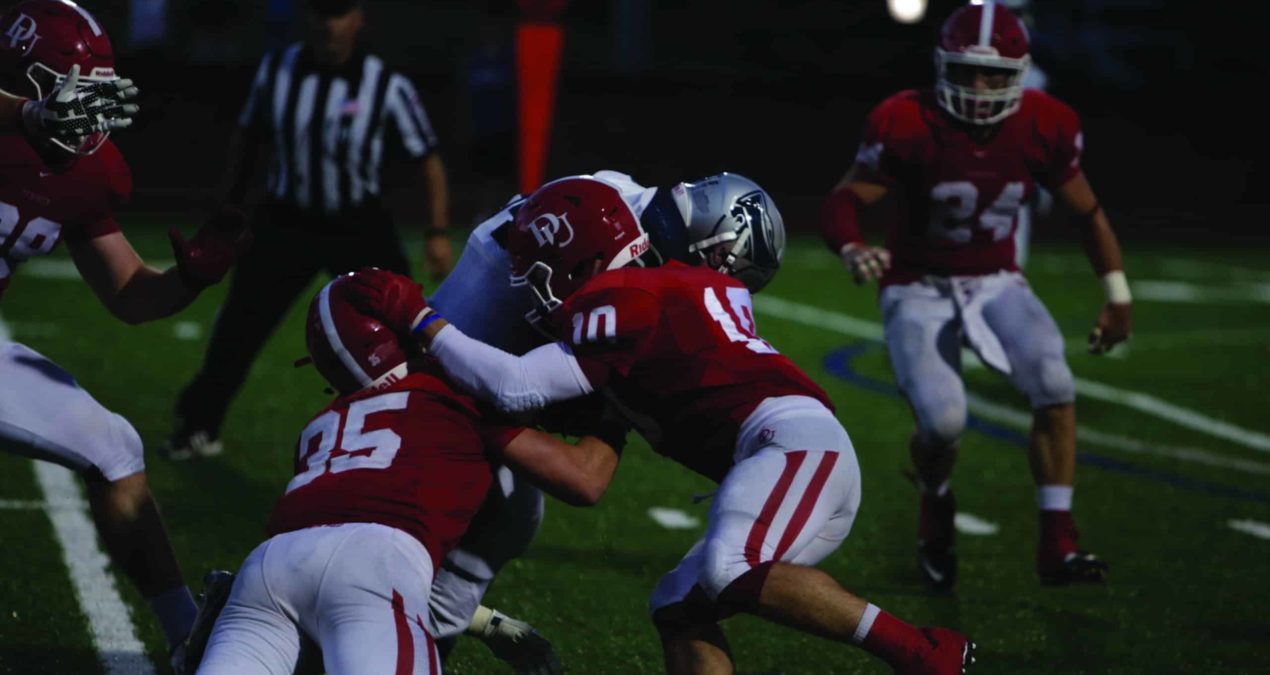 Andrew Baird ‘17 is a tackle magnet.

He routinely leads the team in stops, including a team-leading 29 over the season’s first three games. But what Baird accomplished in the Big Red’s 21-14 victory over Ohio Wesleyan is record-breaking. The senior safety finished with 25 tackles, the most by a Denison player since tackles became an official stat in 2001.

“During games, stats are the last thing on my mind. Hearing that I broke the record after the game, I was shocked.” Baird said. “Breaking the record wouldn’t have been possible without my defensive line and linebackers doing their job. All I hope to do is do my job and try to make plays for my teammates.”

Baird is only 17 tackles away from breaking the career record, currently at 335 stops, set by Tim Koprowski ‘05.

The defense as a whole posted another strong game, holding Ohio Wesleyan to just 135 passing yards and 14 points. It took until the final two minutes of the first quarter for OWU to get a first down.

Offensively, Denison took some time to find a groove. Canaan Gebele ‘19 was his usual dual-threat self, accounting for 340 yards of total offense and three touchdowns.

“Ohio Wesleyan likes to bring a lot of pressure so it took us some time to get used to some of their looks and alignments.” Gebele said. “Whether it was through the air or on the ground we were looking to consistently keep the ball moving. Fortunately, we were able to connect on a couple deep shots that got us into the endzone.”

All of Gebele’s scores came through the air, with two going to his favorite target, David Weimar ‘19. The wide receiver finished with eight catches for 109 yards, his third 100-yard game of the season.

“Canaan and I have a pretty good connection.” Weimar said. “I think the overall chemistry really just comes from the number of reps we run during practices throughout the week. And if one play doesn’t look right in practice, we work to fix it then and there. Then it’s just our job to execute during the game.”

For the fourth year in a row, the Big Red defeated their rivals from Delaware, Ohio. In a series that dates back to 1891, Denison has rarely shown this kind of dominance.

“[Beating OWU all four years] was something I really thought about.” Lohoua said. “I really wanted to do my best. We got tested, but we were resilient. Just [a] great team win!”

The Big Red will be back on the road, traveling to Hiram College on Sept. 8. Their perfect 4-0 record will be put to the test against the Terriers, who upset the Big Red the last time they faced off in Hiram, two years ago. Kickoff is scheduled for 7:30 p.m.