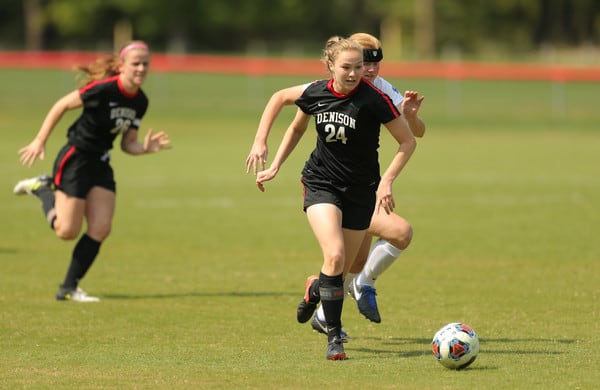 After a nice win streak, Denison women’s soccer falls short in their most recent game.

Denison lost 2-1 at home against an impressive Centre side after a hard-fought game that went into overtime.

After scoring 17 goals in the last four games, Denison was forced into taking a more defensive approach against the Colonels as they were outshot 25-10.

The Big Red however, were not at all shabby with their defense. Goalkeeper Patil Tcholakian ‘22 made a spectacular 11 saves (tying the program record, set back in 2001) in a single match to deny Centre, who were awarded eight corner kicks throughout the game. Besides Tcholakian, sophomore duo Molly Smith ‘21 and Kelly O’Neill ‘21 were also crucial to the Denison defense.

Despite Centre having the upper-hand for most of the game, the first goal actually came from Denison with four minutes and three seconds to go. Kailey Knopf ‘21 fed the ball over the middle to Sam Haseltine ‘19, who finished the play and put it in the back of the net. But, the 1-0 advantage was soon lost as Centre equalized with 33 seconds to go.

With 1-1 on the scoreboard, the game entered overtime and Centre looked much stronger than Denison with the ball spending majority of the time in their own defensive third of the field. The Big Red put up a strong display of defense but could do nothing to stop Centre as the Colonel’s No. 7 Alana Hughes scored the final goal of the game in the 97th minute.

Although it was a disappointing day for Denison, falling to 4-2 in the season, Katie Livingston ‘22 remains positive about the team.

“I definitely think that we are still learning new things as a team every game,” said Livingston. “And every game provides us a new opportunity to work on our skills both as a team and as individuals. I’m excited to see how we grow the rest of our season.”

While the Big Red ended the day with a loss, a number of team members have been impressive so far this year, creating a sense of optimism as the season moves forward. Maggie Armstrong ‘19 and Liz Gilbert ‘22 have led the offensive attack, scoring five and four goals respectively.

After all, there is still a lot of play for in the season, as Denison continues their charge playing the final of five home games in a row against Allegheny next Saturday, September 22, about which Livingston said, “I think that this week we will work on physically and mentally preparing ourselves for the start of the conference play.”