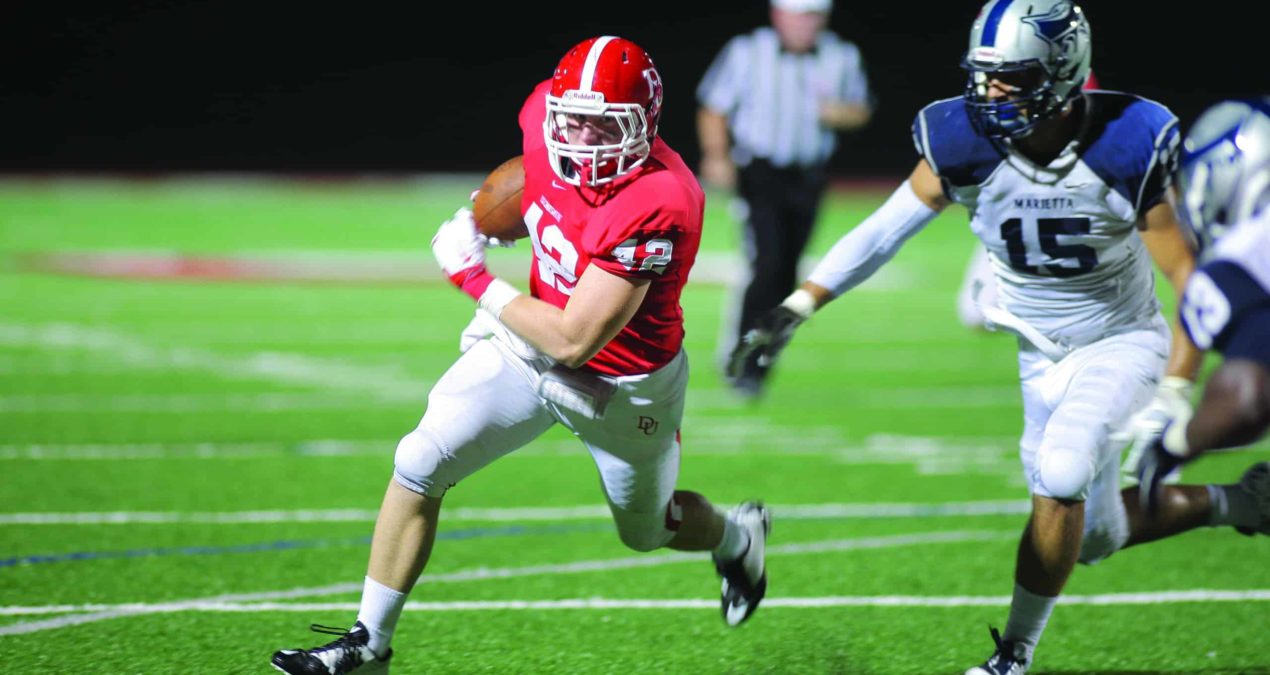 The Hiram Terriers came in with a bark and went out with a whimper as Denison scored 26 unanswered points in a 33-19 comeback victory.

Hiram’s fans were loud early on as their team raced out to a 13-0 first quarter lead.  With his team trailing by two touchdowns, Denison head coach Jack Hatem had to get his team in gear.

It took some time, but the crowd noise began to fade as the Big Red started the comeback.  Denison outscored the Terriers 17-6 in the second quarter, trailing by just two points heading into the locker room.

“We got away from our game plan in the first half.” Zack Neufeld ‘17 said. “Made some tweaks during halftime and ended up shutting them out in the second half.”

“[At halftime,] the coaches stressed that if we just focused on our individual assignments, we would put up points like we did at the end of the first half,” team captain Drew Gray ‘17 said.

Neither team scored in the third quarter, giving Denison just 15 minutes to complete a comeback and prevent a second straight loss at Hiram.

With 13:30 left in the quarter and the Big Red down 19-16, Canaan Gebele ’19 found his favorite target, David Weimar ’19, for a five-yard score.  That score was set up by a 59-yard pass from Gebele to Cody Farley ’19.  Despite a failed two-point conversion, Denison had its first lead of the game.

The Big Red would add ten more points in the final quarter, buoyed by a strong defensive performance.  Only one second-half Terrier drive lasted more than four plays.  Anthony Sernus ’17 and Ryan Zinkula ’19 made up for broken plays with timely interceptions.  Sernus also logged two sacks.

“On the interception, the [Hiram] offense was running an RPO (run-pass option).” Sernus said. “That’s a designed run play but [it] also has the receivers running routes so the QB has the option to pull it and throw. On that play, I saw the run play and stepped up toward it, but then saw the QB pull it, so I got into a quick drop and luckily the ball came my way and I could get my hands on it. It was at an important point in the game where we were able to take the momentum of the game back and get the ball back to our offense.”

After this single-game road trip, Denison will be back at home the next two weeks.  This Saturday, the Big Red will play host to Wittenberg.  The 16th-ranked Tigers are the second-winningest program in Division III history and are 5-0 this season.  Denison has lost 22 consecutive matchups, dating back to 1989.

Kickoff is set for 7 p.m. from Deeds Field-Piper Stadium.