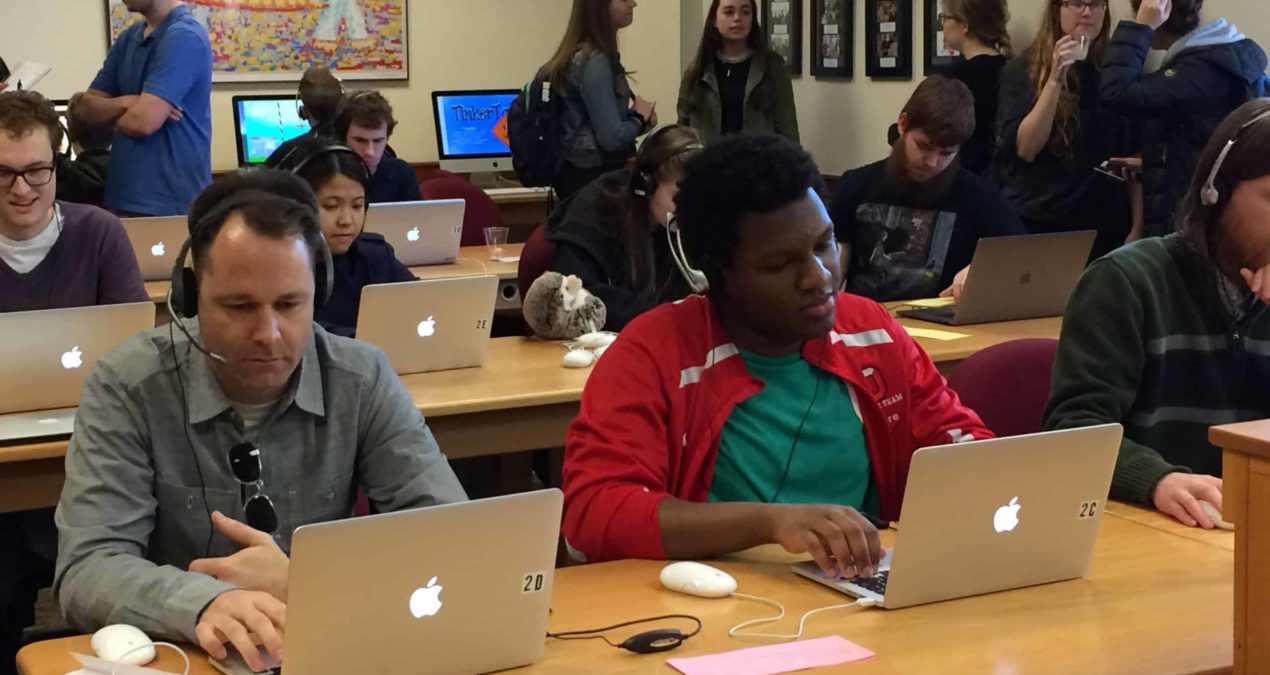 This year marks the third semester of a class focused on game design and instructed by Dr. Ashwin Lall. During the spring of 2015, he initiated a collaboration with the departments of creative writing and music. It was so successful that he continued this structure for this semester’s class.

The students were broken into 5 groups (four groups of four and one group of three) and then paired with students from creative writing and music composition classes. According to Dr. Lall, the students were then responsible for collaborating outside of class time. He did have a bit of trouble with finding writers for the collaboration, and would like to let any of you reading this be a part of later games. His contact information can be found on Denison’s website.

Madison Luken ‘20, a student in the creative writing class said, “Storytelling in this format was a great opportunity to improve my own writing and learn how to respond to other’s creative ideas. As a physics and English lit major, I also thoroughly enjoyed dabbling in both academic areas simultaneously.”

Lall expressed that although the students involved in this collaboration were from different academic disciplines, he does not think that their backgrounds are all that different.

He also described a real world example of a Denison alumnus who fits this epitome of the liberal arts. Lall brought in Spencer Brooks ‘97, a game industry veteran, to speak to his class. While at Denison, Brooks was a cinema and geosciences double major and, as Lall would like to note, not a computer science major.

Students seemed to enjoy the overall experience of this collaborative academic effort.

“I worked on the game Frozen Dash and I have to say it was a pleasure to work alongside the creative writing class because they are able to develop an incredible story while lightening the load on our end. Making a game takes a lot of time and being able to collaborate and pass off certain responsibilities, especially when they do it so well!” said Evan Flax ‘17, a computer science major from Gaithersburg, Maryland.

Corbin Smith ‘17 a computer science major from Kansas City, Missouri explained, “It was very interesting getting to work with a creative writing major since we usually don’t see them in any classes we might take and therefore have little to no experience working with them. Most of us are not too creative so they brought a different perspective on the designing of the game.” Sherief Shahin ‘18, a computer science major from Egypt said, “Love that class! I’d give it a 1010/1010!”

Overall, many students involved believed it was an educational and eye-opening opportunity.

“I’m reminded of a quote from the late Steve Jobs: ‘… it’s technology married with liberal arts, married with the humanities, that yields us the results that make our heart sing.’ My hope is that these students will be able to create games together that will make their hearts sing,” said Dr. Lall.

The Beck Series wraps up with two moving readings