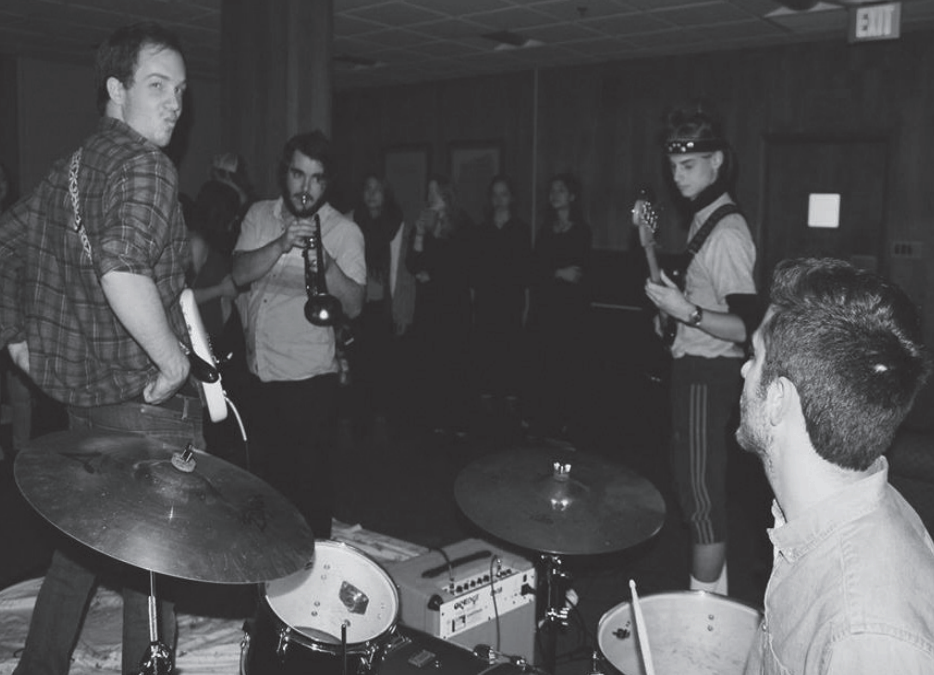 At Moe’s Original BBQ the Granville community witnessed an outstanding performance from an all-student band.

Whipple, an English major from Jacksonville, Florida, had performed at Moe’s prior to the band’s formation, but Monday night was Count Spacey’s first official debut in front of the Granville community.

Self-identified as a garage rock, funk and jam band, Count Spacey played an array of classic rock pieces for this occasion.

Count Spacey’s debut was well-received by locals, including Rich Folk, Moe’s open mic night MC and a fellow musician who performed earlier in the night.

“They are younger folks, college kids, and they are doing Jimi Hendrix, Talking Heads, stuff from the 80s and it’s very appreciated. When they came on, so many Denison fans came in, and it’s rare for a Monday night!” said Folk.

I was fortunate enough to get an exclusive interview with all the members after the show, and the experience talking to the guys was just as enjoyable and exhilarating as was their earlier show.

When asked about performing without Grosslight on vocal and Papadopoulos on the trumpet, Litchman, a communication major from Boston, Massachusetts said, “When we have them there’s a lot more unpredictability to where the song can go. When it’s just the three of us, we know what we’re in for.”

To which Arnett, a psychology major from Bethesda, Maryland agreed, saying, “Tasos was quite a character, sometimes he would sing a song he wanted to sing.”

Despite being down to three members, Whipple did a superb job at singing vocal. Count Spacey did not lose many elements of unpredictability with two members’ absent either.

Arnett elaborated on his frequent improvisation on stage, “Chase tells me chords on stage every time we play. It’s really fun because I don’t know what most of the songs sound like, so I don’t know if it’s wrong or right. Whatever sounds good to me, I usually go with,” he said.

Missed Count Spacey’s previous gigs on campus but desperate to see them live?

“You just have to sit out in Herrick Hall for 24 hours, 7 days a week for our unofficial jam sessions,” said Whipple jokingly.

Just last week, the band auditioned for Doobiepalooza, a music festival of student performers hosted by the Denison radio station, WDUB 91.1, which is coming up in April.

Litchman also talked briefly about a potential recording session at Earthwork Recording Studio in Newark, owned by Thomas Atha ‘05, a visiting instructor of the music department.

So while hoping that they get the gig, keep your ears open and catch the band’s latest stuff on SoundCloud @chasewhipple-1.

Here’s what Count Spacey’s number one fan had to say about the performance: “In most ways, their music grounded me. They brought me back down, and showed me what home was. My favorite performance of the night was probably Ohio. This state is Ohio, and that was real nice,” said Aidan Eells ‘18, an environmental studies major from Crestwood, Kentucky.