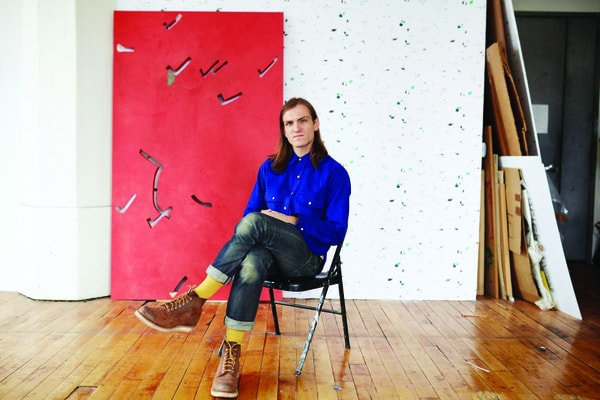 Chris Domenick is a visiting assistant professor, a Philadelphia native and a jack of a medley of artistic trades.

Like the majority of undergraduate students, Domenick did not begin his college career with a clear idea of how he wanted to spend the rest of his life, although he had a vague outline— “I wanted to be an artist. That’s what I set out to do. I didn’t really know what that meant.”

After graduating from the Tyler School of Art at Temple University in 2006, Domenick ventured to New York, intent on guring out what exactly that meant.

He worked for a Brooklyn-based artist and pieced together the reality of pursuing an artistic profession, ultimately determining that this was, in fact, for him. His identity as an artist cannot be confined within the bounds of any one specific genre of creative expression.

“The ideas that I’m interested in cannot necessarily be connected by a medium,” he explains, “I feel open to a broad spectrum of artistic production.”

Domenick infuses his own courses with this same sense of flexibility, which this semester, consist of subjects like performance art and sculpture, choosing to forgo the rigidity of a traditional syllabus, in which each week has been planned and structured in advance, rather resolving to adjust to the interests of his students.

“Maybe it could be aligned with the way a material behaves,” he speaks in regards to his process as an educator, explaining, “You have this idea of how a material is going to behave, and then the material behaves differently than you thought, and you have to react to that, and the idea that you originally had has to change.

That can happen with classes, where

the students’ reactions to your prompt can be really different to what you had expected so you have to modify that.”

While he embraces the malleability of his philosophy in the classroom, Domenick admires the other side of the spectrum, as well, alluding to the work of his fellow professors, “Some teachers have a more clear, bigger vision, like, ‘I know exactly how this is going to go, how people are going to learn this material, and this is the trajectory that I’ve set up that will facilitate that in the best, most economical way.’ I think that’s beautiful. I strive to do that one day…but I think it also just depends on the nature of the material, you know, what it is that you’re teaching.”