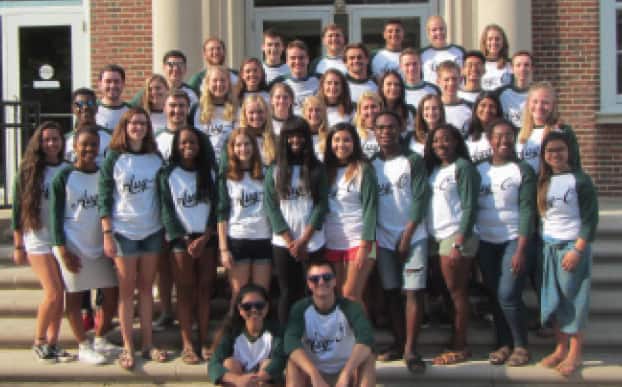 We’ve all been through it as Denison students: August Orientation. Through the meetings, information sessions and late night activities, Aug-O welcomes us to the university.

The three day excursion seems like no big deal, yet it is one of the biggest planned events on campus.

This year, freshman have Ben Burdick ‘18 and Trixie Cortes ‘18 to thank for their Aug-O experience. From figuring out programs for the incoming students to hiring other students to lead the orientation, everything went through Burdick and Cortes.

“There was an application process that began in October for August Orientation Coordinators and I filled out the application and was lucky enough to be given the job,” said Burdick on when exactly the planning began. “Trixie and I began planning August Orientation in about March I would say. We had to interview and hire staff throughout the early spring and then we began planning the activities and programs the first years would go through during Aug-O.”

Over 600 new students under the care of two seniors. It seems like an impossible feat, but Burdick and Cortes went in with a plan. Each one had their own tasks and only a few months to get it all done.

“There’s also work in done in the summer in terms of gathering materials from staff for the FY packets and intro videos, and contacting speakers for training and programming. Ben and I moved in three weeks early to plan training, move-in day, induction, Aug-O groups which was really the bulk of it all,” said Cortes.

It’s not all work without reward, however. The freshmen are welcomed in style, older students get to form relationships with younger ones and the grounds of Denison are broken in a week before all the other students arrive.

Burdick’s favorite part about coordinating August Orientation was watching the staff interact with their First Year Groups. He said watching them utilize the training and make a difference in the transition of the new first years was an incredible moment.

Cortes described herself as really meticulous when it comes to details, and that she and Ben worked hard when it came to planning stuff like induction and the Food Trucks with Weinberg.

“Seeing it all come together was one of my favorite parts! Staff bonding was also amazing this year and worked out really well. My absolute favorite however, was the class photo! I was the girl on top of the roof yelling at groups to get in place, and Ben was on the ground corralling them as well. It was worth it though because that’s the best class photo we’ve ever seen!” said Cortes

Burdick said he had no ‘least favorite’ part of organizing Aug-O, but that there were some challenges.

“One of the most difficult parts of organizing Aug-O is coordinating with everyone’s schedules. During staff training we were lucky enough to have members of the administration come speak with us, and it is hard to coordinate a time that works for both parties,” said Burdick.

Cortes and Burdick were almost too thorough, with a planned backup induction.

“It wasn’t put into place because we had good weather for it but we had such a well thought out induction rain plan, that I almost wish it had drizzled a little bit!” said Cortes.