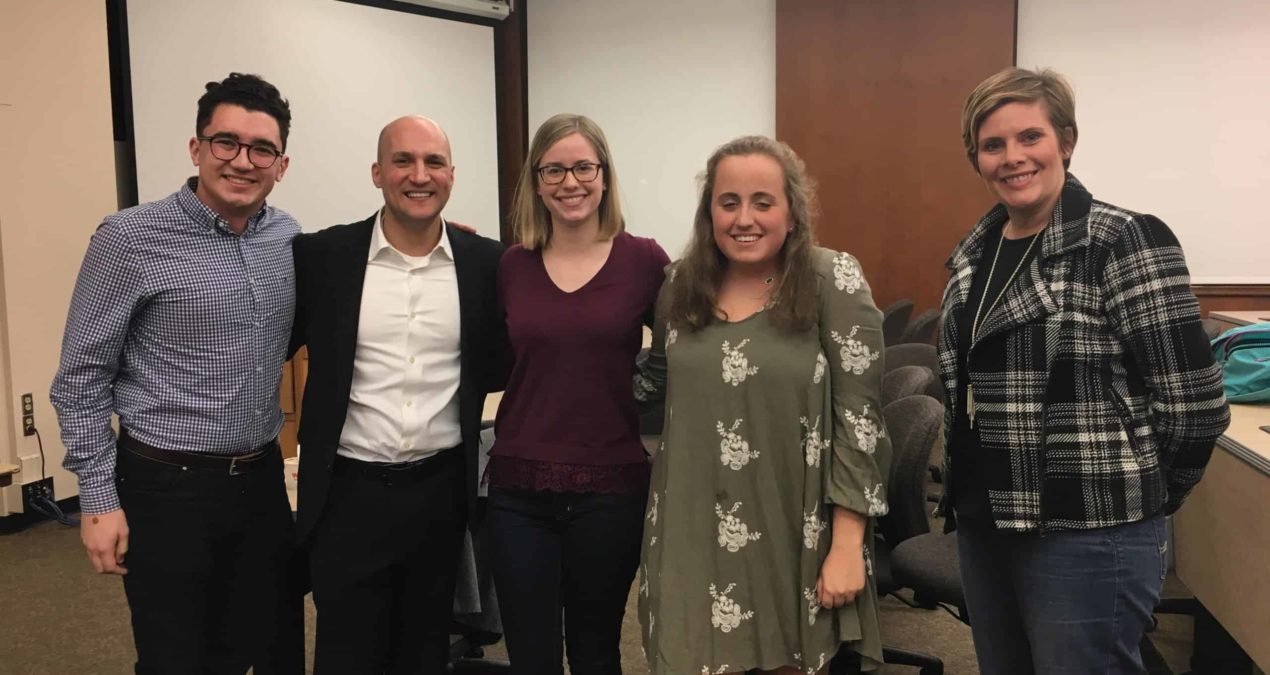 by Emma Stancey
No Comments

From a humble upbringing in Youngstown, Joe Schiavoni knew that the only way to make change in your community was to work for it. That’s what he plans to do if elected Ohio Governor this fall.

With Governor John Kasich’s second term coming to an end, the position is now being fought for by seven people- two Republicans and five Democrat, including Schiavoni, a 38 year old Democrat.

When visiting Denison, Schiavoni meet with members of the community to share his ideas for increasing job growth, funding schools and creating safe communities.

“End of the day it’s about helping people giving opportunities and pathways so people can succeed,” said Schiavoni. “Nothing comes easy anywhere in Ohio. It’s about hard work, connecting with people and being honest. Listen first speak second, which is something I learned as a worker’s comp lawyer as well.”

Schiavoni was first interested in politics ten years ago in 2009, when he said he noticed a need for young people to step up and participate in government for the right reasons and not the same routine that he saw.

He managed to get elected to the Ohio Senate, even becoming minority leader, which is an experience that taught him how to work on bipartisan issues. While the minority leader, he worked for three years with a 10-23 caucus where the Republicans held the majority.

“When I’m talking about bipartisan actions speak louder than words and I can show people what I’ve done,” said Schiavoni, referencing his work on legislation with Republican Ohio Senator John Equin.

This is one of the many things that he says will make him stand out as a candidate, as well as his grassroots effort. Starting 15 months ago to campaign, Schiavoni believes that as the youngest he has to work the hardest. However, being the youngest candidate, and potentially the youngest Ohio Governor if elected, does have advantages.

The other four candidates are way older, by 20 years. It’s about connecting with young people and showing young people that there is an elected official out there that understands and wants to listen and bring them into the process. I need young people to win,” said Schiavoni. “And really by young people I mean anyone under 45-years-old.”

With his younger insight, Schiavoni believes that he can create incentives to keep younger people in Ohio. One of these incentives you be a program where students who go to school in Ohio could have part of their student debt absorbed by the state if they buy a house in Ohio within five years of graduation, modeled off a program in Maryland.

Another focus of his campaign is working to increase accountability for charter schools, work that he did as a senator as well. Schiavoni said that he is often falsely painted as an anti-choice candidate, but that if charter schools follow the same rules as public schools, everything was good,but if charters are prioritizing making money over education then put in regulations.

“Joe and I have a focus on three things: jobs, opioid crisis and safe communities and quality education. When you have quality education then you have a skilled workforce and can draw additional employers to employees who are living in our safe communities,” said Stephanie Dodd, Schiavoni’s running mate from Zanesville in Licking County. “When I decided to join the election and looked at all the candidates it was easy to join Joe. Joe and i have a lot of energy and enthusiasm. There has been a lot of positive response and we’re impressed by the number of people who want to support.”

Although Schiavoni seems to have a strong voter base, he knows that he has to be realistic with this election. Richard Corey is a big obstacle in the Democratic race, while Republican Mike Dewine is making huge leaps ahead in polls.

That’s why Schiavoni is visiting all the colleges and universities in Ohio. He says that racing against a candidate with over two million in funding while he only has a couple hundred thousand is a large obstacle, but he wants to give people a chance to pick him.

“Cordrey and DeWine already ran against each other and DeWine won so why is that a good idea to do again? Why not give someone a shot that can get young people excited… get back the base voters that were Obama and Trump voters. I can do that,” said Schiavoni.

Schiavoni has a long road ahead before the election, but believes with the support of his wife and two kids he is ready to put in his all. Anyone interested in his platform is encouraged to go to www.joeforjobs.com. Schiavoni continues his Ohio school tour as he heads to Miami and Kanyon the next few days.