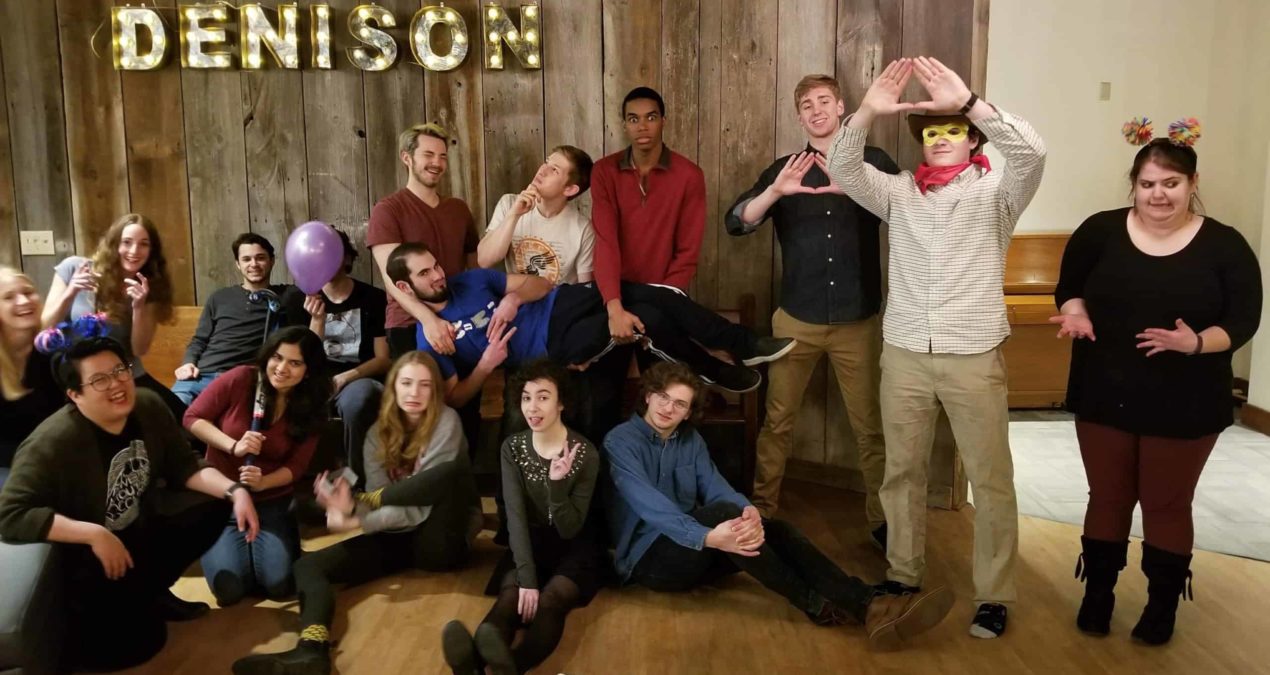 JESSICA LEEDS RICHMAN — Laughter echoed throughout the third floor of Slayter as the story of Purim was shared. This year Purim was enjoyed up the hill, and hosted by Denison’s Jewish student organization Hillel.

Purim is a Jewish holiday that celebrates the retelling of the Book of Esther – or the Megillah. The Megillah tells the tale of Queen Esther who saved the Jewish people from a genocide orchestrated by Haman – the King’s advisor. Though the story is a serious one, the version enacted at this event was one of rhyming humor. Additionally, the three readers were dressed up by their peers in costume garb made to invoke an enchanting experience.

After the initial blessings to welcome in Shabbat and the reading of the Megillah, the floor was opened for a wide variety of activities. Mishloach Manot – Purim gift bags – were assembled for Jewish faculty, staff and Granville residents. Hamantaschen were available for plenty of noshing, and Israeli music was played throughout the Roost. Games such as Twister and cornhole were available for playing as well.

“There was a variety of fun party games, which made me really nostalgic. The last time I played twister was years ago, and it felt great to partake in it again,” said Julia Tallant ‘20, an international studies major from Atlanta, Georgia.

Dan Shapiro ‘20, a global commerce major from Needham, Massachusetts, and one of Hillel’s Shabbat coordinators shared, “I’ve always loved Purim back home between my congregation Purim spiel . . . and also the Purim carnival where there are tons of fun little activities . . . I wanted to bring a little bit of that to Denison in the form of shave Haman which I vividly remembered fondly as a kid.”

This activity was present at this year’s Purim party.

“Basically, the person leading the activity would give you a balloon with a smiley face on it, shaving cream and a razor, and you were expected to put shaving cream on the balloon’s face and shave it off. While it worked better with little kids at our temple, we still had a lot of fun with it here and that’s all I can really ask for,” explained Shapiro.

The evening wound down with group bonding as members of Hillel shared personal stories over the microphone. While listening to each other, attendees created crafts such as decorative masks. A key aspect of Purim is the costumed parade occuring at the end of the story. And while not many students came dressed in costume, the arts and crafts provided a creative way for this connection.

“Purim is a great opportunity to gather around and celebrate the culture of the Jewish people. Specifically, as [we] reflect back on a past strife in an upbeat fashion with colorful decorations and costumes,” said Graham Blehart ‘18, Hillel’s president and an international studies major and Spanish minor from Chicago. “Events like these are important to have on Denison’s campus as they invite students from a wide array of cultures into the Jewish culture and show a less media portrayed aspect of the Jewish religion.”

Hillel meets weekly at 6 p.m. on Fridays for Shabbat Dinner at The Open House.