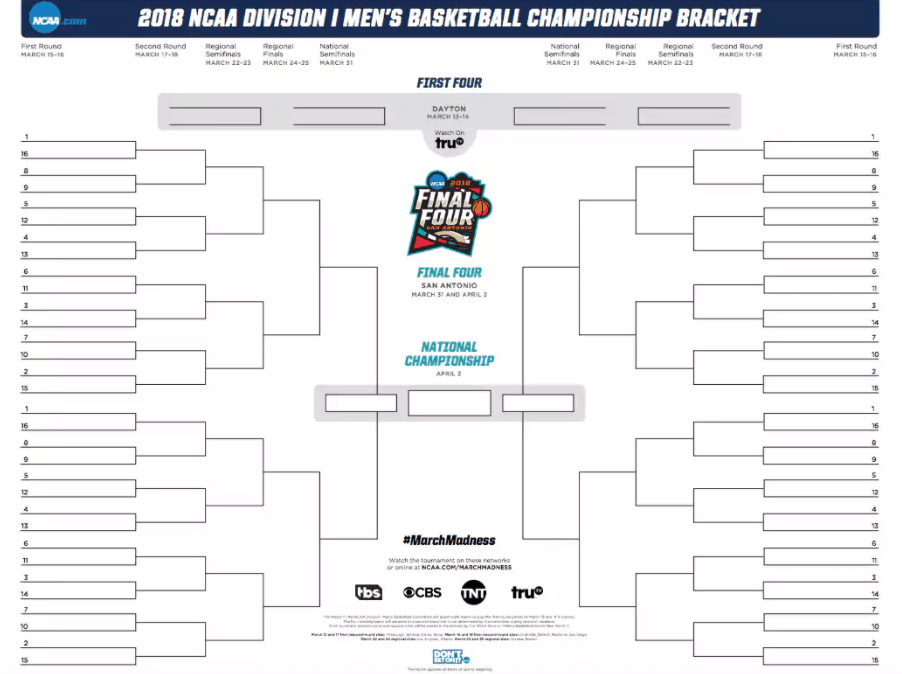 March madness is here, get your brackets ready

The madness is finally upon us once again.

March Madness, that is. Every March, 68 teams battle head-to-head in a tournament that is viewed by many as the most exciting in sports. It is the win-or-go-home format in the annual Division I Men’s NCAA Basketball Tournament that keeps fans at the edge of their seats for the three-week competition.

And we can’t forget about brackets. Last year, over 13 million brackets were submitted on ESPN’s Tournament Challenge platform (ESPN). With each bracket entry, however, comes inevitable failure. In the challenge’s rich history, millions of fans fill out their brackets each year with the hopes of selecting the first ever perfect bracket. That, of course, would require correctly selecting the winners of 63 consecutive games. Who knows? Maybe this year is the year somebody finally defies the odds.

Virginia, Villanova, Xavier and Kansas sit atop each of the four regions as one-seeds this year, but there are 64 other teams with championship hopes. These young men work for their entire lives to make it to this point and the level of competition in this tournament reflects that year in and year out.

Comeback wins. Shocking upsets. Buzzer-beater finishes. No matter how the tournament plays out this year, there will be guaranteed madness. Perhaps an under-the-radar team will make a surprising Final Four run like South Carolina did last year. Or maybe an unproven group of freshman stars will flourish before everyone’s eyes and carry their team to success as they did for Duke in 2015. There are endless possibilities every single year and that is what makes this tournament must-watch television for basketball fans around the world.

Each region is filled with the potential for exciting matchups every year, and this year is certainly no different.

In the South, top-seeded Virginia could have to square off against Kentucky in the Sweet Sixteen; who knows who would come out on top in a clash between ACC and SEC tournament champions who play totally different styles of basketball?

North Carolina finds themselves sitting as two-seed in the West this year poised to return to the championship round with a chance of becoming the first team since Florida in 2006-2007 to repeat as national champions. But they might first have to fend off the surging Big 10 Champion Michigan squad or even fourth-seeded Gonzaga, the team they knocked off to secure the title last year. And surely, the top-seeded Xavier Musketeers will have something to say about North Carolina and their championship aspirations.

Villanova has earned the right to own the one-seed in the East Region that features several upset-hungry teams including fifth-seeded West Virginia and ninth-seeded Alabama. Villanova will have to withstand every team’s best shot in order to have a chance at recreating the national championship success they found in 2016.

And last but certainly not least, we have the Midwest Region. The top-seeded Kansas Jayhawks are in their typical spot this time of year, coming off yet another Big 12 Conference Tournament Championship last week. They will have to play their best basketball in the coming weeks to erase the stigma that they cannot win the big games when they count; despite seemingly always being in the mix at the top of the bracket, Kansas hasn’t been crowned national champion once since 2008. While the University of Pennsylvania will be looking to become the first ever 16-seed to take down a one-seed, there are some other potential matchups that have everyone’s attention including a possible Kansas-Duke Elite Eight showdown.

So much is possible with March Madness. And while it is next to impossible to predict everything correctly, it is certainly worth giving it a shot. All final bracket entries must be submitted before the first round of the tournament tips off at 12:15 p.m. eastern time on Thursday, March 15.